Another Moonday has come and gone, so it’s time to review the latest episode of Teen Wolf!

A lot of things happened this episode—there were scary Death Eater guys, characters were topless and painting each other, and Derek wore a shirt that wasn’t black or grey. Oh, and also, the Death Eater-like guys might be trying to kill our heroes, and one of your favorite characters might actually be a bad guy.

Like I said, a lot happened this episode. Spoilers after the cut! 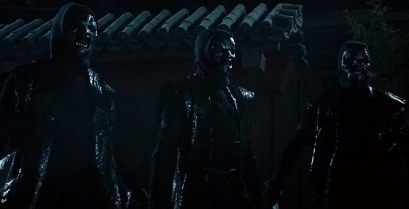 Our episode continues with its Halloween theme and we get our first look at the strange figures who came from the Nemeton. Since they’re dressed in black robes and wearing scary masks, we at LGG&F have helpfully named them the Death Eaters until we learn more about them. The Death Eaters attacked Isaac last episode, but he was unharmed—though he did seem to be freezing and only came to and was able to heal himself when Papa Argent hit him (seriously, people need to stop hitting Isaac). Allison’s father seems to know something about these strange hooded figures and actually has one of their broken masks in his study. He asks Allison and Isaac to give him twenty-four hours before they mention anything about them to anyone else, particularly Scott.

Later, the twins continue to try and get into Scott’s good graces by pretending to be normal high school kids. Aiden in particular seems more focused on seeming normal so that Scott will accept them, while Ethan is largely focused on Danny and seems annoyed with his brother. Aiden is quickly and thoroughly given a wakeup call by Lydia who, in probably one of my favorite Lydia moments to date, says that she enjoyed being a hero when she helped saved Kira. She tells Aiden that when she looks at him all she can think about is how he killed Boyd. She dismisses him by telling him he’s not just a bad boy, he’s a bad guy.

It’s nice to see Stiles, Isaac, Lydia, and Scott all act coldly toward the twins because of

what they did to Boyd. I’m still really annoyed by Boyd’s death in general, but I was extremely upset that (with exception of brief moments with Derek) no one really seemed to be mourning Boyd—or Erica for that matter. So it’s nice that Teen Wolf is finally taking the time to let their characters show emotion instead of just moving from action scene to action scene.

Aiden and Ethan, still attempting to win everyone’s favor, offer to let Danny host his Halloween black light party in Derek’s loft. During the party, none of the characters seemed upset about this, but if I was a character in this show I would have been thoroughly pissed at the twins. They broke into Derek’s loft and hosted a party in the same place where they brutally killed Boyd, and they think that is going to gain them sympathy? Sorry, no.

At this point, the only reason I am even remotely behind the twins staying on the show is for queer representation and Danny. I have always said the show has done a decent job at queer representation, but recently I have started to rethink that. It’s not because there aren’t gay characters, but none of these gay characters are playing a significant role. Ethan is arguably the only gay character now that has any real significance to the plot. And Danny has been around since season one—I don’t think it’s fair that the twins have more lines in one episode than Danny does in a season. I get the feeling that maybe Danny would have played more of a role if Jackson had stuck around since they were best friends, but alas, we’ll never know. Anyway, I kind of hate the twins and want them to die, but if them sticking around means that Danny will soon become a major player, then I’m all for it.

Speaking of queer characters, we actually have another added to the list! Caitlin, who in 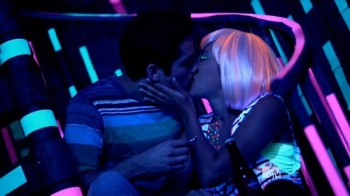 season 3A lost her girlfriend to one of Jennifer Blake’s sacrifices, comes back this episode and is revealed to be bisexual. She dances with Stiles at the party and kisses him, and when she admits to liking both boys and girls, she asks Stiles if he does too. Stiles sadly remains silent on this issue. On the one hand, I like the idea of Stiles slowly discovering his sexuality, but on the other hand, I’m worried that he ultimately will end up being straight and this will all be a colossal queerbaiting tease. In any case, hopefully the scene was a hint and not just the writers toying with me, and hopefully we’ll get more of Caitlin in the later episodes because we can always use more queer ladies on TV.

Now back to the plot. Scott has been trying to get to know Kira better after realizing that she has magical powers. Apparently Kira didn’t know that she was magical, but reveals to Scott that when she takes her pictures of herself she looks like she is glowing. Eventually, when using his werewolf eyes, Scott realizes the glow around Kira looks like a fox, so it’s likely she is our kitsune. Kira’s biggest problem with the pictures this episode is that some of them were on her phone, which was confiscated after Agent McCall brought Scott, Kira, and Stiles home from the power station last episode. Scott and Stiles help Kira break into Agent McCall’s office to delete the pictures. While Scott and Kira are busy, Stiles distracts Scott’s dad and reveals that both he and his dad know something about Agent McCall that he doesn’t what anyone to know. Uh-oh, what could it be?

Also, Agent McCall has an adorable baby picture of Scott as his laptop background. Awww! I wonder if it’s one of Tyler Posey’s real baby pictures?

Anyway, after helping to delete the pictures from Kira’s phone, Scott, Stiles, and Kira head to the party, where Lydia and Ethan are attacked by the mysterious Death Eaters. And like Isaac, they are left cold and panicked but otherwise unharmed. Derek is also attacked (after an adorable scene with some trick-or-treaters); he seems to fare a bit better than the others but is left just as shaken. Derek returns to his loft and discovers the party, and in classic Derek style goes all Hulk and kicks everyone out. Not long after the innocent bystanders leave, the gang is attacked by the mysterious Death Eaters again. This time they are targeting Aiden. The werewolves leap into the fray to fight the bad guys (revealing to Kira that Scott is a werewolf), but are still unable to stop them. Derek even breaks one’s neck, but it immediately heals and doesn’t even seem to faze the guy. The cloaked figures get to Aiden and mark him, leaving the same mark on his neck as on Derek, Ethan, Lydia, and Isaac. I’ll get back to this in a second. 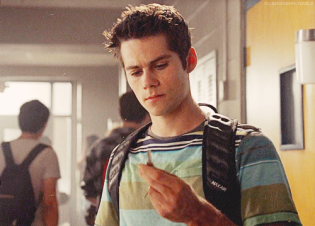 Stiles, during all of this, is puzzling over a mysterious key that was left in his locker. He eventually learns from Caitlin that his key has phosphorus on it. Stiles realizes then that it must have come from the chemistry classroom. He leaves and goes to the chemistry classroom and realizes the key he had is to a closet where the chemicals are kept. He also discovers that the message left for Barrow last episode, that suggested Barrow attack Kira, was in his handwriting. Gasp! So Stiles realizes he must have somehow helped Barrow and pointed him toward Kira.

On top of this, Chris Argent’s twenty-four hours are up, but Allison and the gang are unable to get a hold of him because he just collapsed bleeding on the floor of his house. Oh no! Thus ending yet another episode of Teen Wolf with a horrible cliffhanger.

Back to the mark left by our mysterious glowing Death Eater guys. Allison points out that

the mark left on everyone’s neck looks like the number 5. There are also five scary guys, so this is a possibility; however, MadameAce, one of our many go-to people for all things Japanese, pointed out that the symbol on everyone’s neck might actually be the Japanese kanji 己, which means “self”.

This could make sense, given the preview for next week’s episode that was shown during Wolf Watch. In the preview, Kira mentions that these mysterious figures are looking for an evil spirit. Kira thinks it’s her, but I’m thinking Kira is just a red herring. I’m sure Kira will be our kitsune, since the only character who hasn’t been himself recently is Stiles. I think SuperWolf fans (Supernatural/Teen Wolf) will start screaming to get the salt because I think Stiles might be possessed by an evil spirit.

We’ll just have to wait and see what happens next Moonday. Until then, Teen Wolf fans!