Most sci-fi/fantasy stories go like this: a bad guy is causing problems, the good guy(s) take a noble stand against the bad guy, there’s an epic, violent battle, and then the bad guy is killed or defeated. Once again good reigns supreme. This is typically how the story goes, but does it have to go this way?

Fanfiction explores things a little differently. Often, evil characters are just as beloved as—and sometimes even more beloved than—the heroic characters. Furthermore, villains often have some sort of tragic backstory that viewers can relate to, especially if viewers have gone through similar experiences. For example, I think anyone who has experienced racial prejudice can sympathize and even understand exactly where a character like Magneto is coming from. While some fans rationalize and make excuses for the evil some villains do because they relate to them (or simply like them), other fans recognize the evil these villainous characters have done, but don’t want them dead or locked away. I think one of the most interesting ways fans deal with this dilemma is through fanfiction.

Fans write a world where, instead of the hero dismissing their villain as pure evil, the hero reaches out to them and tries to reform them. I find this incredibly interesting because, in order to do this, fans need to have a good understanding of the villain’s character and point of view. On top of that, instead of seeing this villain dead or imprisoned, fanfic writers want the heroes to try and empathize with and help this villainous character. The whole thing sounds an awful lot like wanting two divided groups or two people to open up a dialogue with one another, understand each other, and eventually come to a conclusion that would help all the parties involved. Basically, it seems like fans want their favorite characters to solve their problems like adults instead of just killing each other, because, especially in sci-fi/fantasy, that rarely fixes anything.

Now, in published fiction, there are evil characters who do reform themselves, but they

all usually have one thing in common—they die. For example, Darth Vader: he saves Luke and redeems himself, but then dies. Fandom doesn’t seem to care much for that trope either, so we find fanfic where the villain lives and has a ongoing process of redemption rather than one selfless act that somehow undoes countless acts of murder. Certain fandoms have an easier time with this than others. Marvel, for example, has Loki, and, yes, everyone adores Loki and wants him to stick around. For fanfiction writers, having a story where the heroes attempt to reform Loki is actually pretty believable considering that Thor really does want to help his brother. But other characters are a little bit more difficult. Can you imagine if Voldemort had repented when Harry asked him to try and feel some remorse? Imagine how difficult reforming Voldemort would be for literally every party involved, even if it is an intriguing idea. 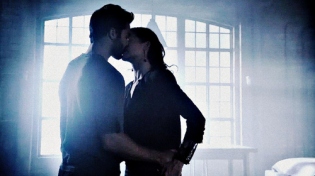 There are also fanfics that explore this idea from a more romantic angle. The hero and villain may realize they have a lot in common and grow to understand each other better—maybe even fall in love—and this guides the villain back to being someone better. Now this type of story, while cute, is problematic in the way that it can potentially promote unhealthy relationships. You can’t actually just love someone until they are a better person; they have to want to change. But done right, these fanfics can be really interesting too.

Now what does any of this have to do with pacifism? Well, while many of these fanfics don’t necessarily exclude violence, they do present us with narratives discussing reform, understanding, and dialogue over violence. On top of that, the writers manage to make it entertaining. I think it’s important that we explore other means of resolving conflict in narratives, and while mainstream media doesn’t appear to be doing much of that, surprisingly fanfiction seems to be exploring that idea.

Having more pacifistic conflict resolution, or more creative and thoughtful ways of responding to conflict, is really important if we ever want to encourage a worldview where violence and aggression isn’t the first go-to option of conflict resolution. Sadly, most of today’s media seems to promote the mentality of: “If there’s a conflict, punch it! Problem solved!” This is not how the real world can or should work. Is it any surprise then that fanfiction, a medium that is made by and focused on people who are considered outcasts by society, would want to write about a world where a character that is seen as a villain is actually someone not so villainous? I don’t think so. Nor do I think it would be surprising for fanfiction authors to want heroes to actually act like true heroes and have them engage in dialogue and understand the perspective of the villain better so that they can work toward a peaceful, mutually beneficial end.

Fanfiction is a medium that really tries to get us to look at a story in a different way, and in this way, fanfiction authors are asking readers to look at the villains as real people and not monsters, which makes just fighting and killing them seem unpalatable. So seeing villains as real people with real problems and emotions pushes the story into the realm of dialogue (instead of violence) to solve conflict. I think that in our current society that’s a pretty interesting and bold storytelling move. But does this mean that fanfiction is intentionally promoting pacifism? Well, probably not. But pacifism does promote understanding and dialogue with one’s enemies over violence, so while I don’t think fanfiction is necessarily promoting pacifism, it does at least engage with the idea that you don’t necessarily have to punch someone to solve your problems.

3 thoughts on “Does Fanfiction Promote Pacifism?”