It’s February, which means it’s time for femslash! In an attempt to read better and more diverse fanfiction, I began my quest by looking for some good femslash. I also looked for it in places where it may not be as common. For example, fandoms like the Xena: Warrior Princess will obviously have more femslash because its source show stars two strong women. So I began my search in popular fandoms that had noticeably less popular f/f ships. This time around I started with Teen Wolf, and this excellent Christmas fic that focuses on Lydia Martin and Laura Hale.

I might be late, but the season doesn’t detract from how good this fic is.

One of the things I love about stick with me baby is that it is very lady-heavy. The only male characters to really put in an appearance are Derek, Peter, and Scott. I think Stiles gets a mention, but he never actually shows up. Instead, the story relies heavily on our female characters, focusing primarily on Lydia and Laura, who are in a serious committed relationship when the story begins. The main conflict focuses on the fact that Laura never told her family about Lydia and that she may have accidentally mated (aka the Teen Wolf equivalent of werewolf marriage) with Lydia. 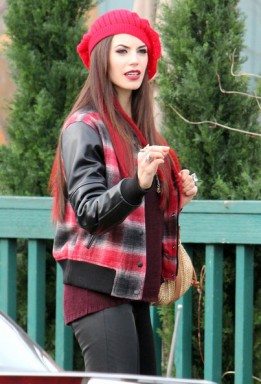 I don’t want to give too much away as to how things develop, but there is a happy ending and some really great moments. Laura has no canon personality due to the fact she is dead at the beginning of Teen Wolf, but in many fanfics, Laura lives and is often portrayed as very feisty and in control. In this fanfic, however, Laura is a little bit of a failwolf like Derek, though she is still portrayed as handling things better than Derek ever does in canon. In stick with me baby, Laura does something a little unconventional and leaves the Hale Pack, headed by her mother Talia, and sets off to start her own. It’s mentioned that Lydia, Allison, Scott, Stiles, and Lydia’s mother are all in Laura’s pack, though Scott is the only other werewolf, and most of the pack is in college so they’re sort of scattered about.

Lydia and Laura start dating in college and eventually move in together. When Laura finally reveals that they have been living together for six months, it’s brought to Laura’s attention that she and Lydia have mated due to a Nesting Bond, which is basically like a common law marriage for werewolves. Here is a great scene where Marin Morrell, who in this story is Laura’s emissary and best friend, explains the bond to Laura:

Marin shook her head and sat down in the leather stuffed chair across from Laura, opening up the book of Mating Codes to the table of contents. “I’m not mad. I’m not even surprised. I’ve been marking this on the calendar since August.”

Laura threw her hands in the air, scattering almond shortbread crumbs onto the chintz sofa. “For fucks’ sake, has everyone been expecting this but me?”

Marin rolled her eyes again—she was even a better eye-roller than Derek and Talia combined; Laura never figured out how she did it. “We all thought you were in on it, dumbass! There are only a few key mating codes, and the Nesting Bond is the third most common.”

“The Nesting Bond? Seriously? Am I a bird?” Laura tried to imagine Lydia curled up in a nest made of sticks and spit and giggled a little.

Marin slid the book over to Laura and showed her chapter four—”The Nesting Bond, The Habitat Bond, and other Natural Werewolf Mating Rituals”. “Read the second paragraph.”

“Most often, mating season takes place anywhere between December and March, and involves an alpha werewolf and the mate of their choice.” Laura sighed. “Well, it looks like I’m two for two at this point.”

“Keep reading,” Marin urged. “You’re not even at the good part yet.”

fanfic. Marin, unlike Laura, is still alive in canon, but makes very few appearances on the show, so it was nice to see the character actually explored and given more personality in this fanfic. The friendship between Laura and Marin is very realistic and relatable.

Lydia and Laura’s relationship is also extremely well written. Every conversation they have comes across as a couple who have been together for a while. You can tell they love each other deeply and know each other really well, and all of this is done while keeping Lydia in-character (since Laura doesn’t have a canon personality, she’s kind of a moot point).

Laura leaned back on the couch. “Hey,” she said, nudging Lydia in the shoulder. “Hey, come here Little Red.”

Lydia screwed up her face in distaste but cuddled into the warm circle of Laura’s arms, resting her cheek against Laura’s shoulder. “You know I hate that nickname.”

“Would you prefer Riding Hood?”

Lydia, as always, is a forced to be reckoned with and approaches everything as coolly and confidently as she can, even if she’s secretly worried or nervous. There is an excellent scene between her and Talia Hale, and it was really great to see such strong feminine personalities meet in this story.

Like I said, I don’t to give away too much of what happens in this fanfic, but I will give one tiny spoiler. For those of you that are uncomfortable with the consent issues that come from accidental mating/bonding fics, you don’t need to worry about this one. The way everything is explained removes any potential consent issues.

I have to say my absolute favorite thing about this fanfic is the feminist themes that are shown throughout the story in subtle ways. Lydia mentions seeing Laura at Take Back the Night rallies in college, and Talia Hale specifically brings up the patriarchy. There are some other feminist themes I won’t mention for plot reasons, but they’ll be obvious if you read the story. And before I go, I have to promote this author in general. FreshBrains clearly has a good understanding of feminism and incorporates feminist themes into fanfiction and fanfiction tropes better than any other author I have seen so far. I would highly recommend all of her fic (I might even rec another one of hers once it’s finished) as it’s very different from typical Teen Wolf fanfiction.

1 thought on “Fanfiction Fridays: stick with me baby by FreshBrains”