Though we’re in the midst of the tornado of news coming out of the Winter Olympics, there’s been some pretty big news in the video game world lately, too—so much so that I’ve decided to give you guys a two-for-one deal today. No need to thank me.

May as well get right into it. First, we have an either exciting or disheartening move (depending on your personal views) from Sega.

Sonic Boom intends to take the Sonic franchise into the next gen systems, although from this trailer I can’t really discern in which direction. To someone like me, whose favorite games of the series are Sonic Adventure 2 Battle and Sonic Colors, Boom seems like it’s trying to take itself a little too seriously. Personally, I think that’d be doing a real disservice to the whole series, since one of the things that makes it so charming is its tongue-in-cheek humor. I also can’t really tell what kind of gameplay they’re going for. It seems like sections of the game involve each character having their own path and stages, but then there are sections that look like something right out of Sonic Heroes. If they implement a system where you can switch characters within the stage itself, it could be interesting, but it could also make the game a bit simple, especially for hardcore fans of the series. 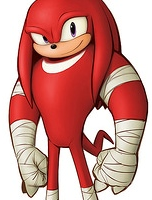 Unlike Sonic, he don’t chuckle (file under “designs I don’t understand”)

And I’m just going to say it right here: I’m not really a fan of the new designs. Why are their legs so long? Seriously, why are they so long and why is Amy posed like she’d rather be modeling than hitting shit with her hammer? She doesn’t even get any speaking lines in the trailer, which is bullshit, because everyone else in the main four do. Aside from this gripe, the length of their legs make their models move strangely and it just seems a lot less fluid than in previous installments of the series. Maybe they’ll find the right balance before release. Hopefully.

There’s also a trailer for a Sonic Boom television show (which you can watch here). Coming off the game trailer, I’m pleased to see that, although the humor is definitely more accessible to a younger audience, it’s at least there. If Sega’s intent with Sonic Boom is to bring in kids to form a new generation of fans a la the 90’s Sonic the Hedgehog show (and NOT Sonic X), then I’m cool with it. I’m interested to see where they go from here with development.

Your second course for today is a game you’ve probably never heard of, but which I’ve been following for a while. Let me adjust my hipster glasses as you take a look.

For those fans of The Sims and Animal Crossing, Tomodachi Collection is right up your alley, and until literally yesterday, I didn’t think it’d have a chance in hell getting released overseas. This quirky game allows you to make Miis and stick them in a digital town as they live their lives. You can give them gifts, play games with them, offer them advice, and probably do countless other things that weren’t shown in the trailer. What I find interesting is that Tomodachi Collection is played in real time, even when you aren’t playing the game. It seems like people may meet and grow closer after you’ve turned the game off, which could present an interesting problem if you like micromanaging your Sims as much as I do. Still, I do think that this is a fantastic step in broadening the spectrum for games to consider for localization. We’re already making huge headway in the visual novel genre (see: Professor Layton and Dangan Ronpa) and if casual games end up being successful with their, perhaps, less readily Western-accessible titles, maybe we can get more games over here and put an end to the genre stagnation that seems to be plaguing the American market. I can always dream.