Well, the trailer for next season has been out for a while now, so it’s about time we talked about it.

I’m excited. How about you?

I should clarify that I have yet to finish all of the books, and though I know what happens in them, I’ve only just started the fourth one. However, the ending of A Storm of Swords takes place congruently with A Feast for Crows and A Dance with Dragons, and as the HBO series can’t simply cut out half the characters for a season in order to be accurate to the books, I think it’s safe to say that we’re going to start seeing a lot more differences between the two mediums this season. 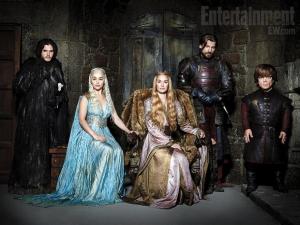 It doesn’t surprise me at all that they’d do this. Sometimes, I feel as though the books and the TV series are two completely different stories because of all the changes. There are things that I like in both versions, and things that I also hate. Additionally, thinking of them as two separate stories helps me to enjoy the TV series and not start raging about all the changes. As such, I don’t mind that Asha’s name was changed to Yara to avoiding confusing her with Osha’s character. It doesn’t bother me that all of the characters are at least five years older than their book counterparts, and despite some of the actors not looking like the original characters they’re meant to portray, I think they all do a really good job at the roles they’ve been given.

That said, for this time around, I could really do with a few less sex scenes. Really.

If there was one thing that I could remove from the HBO series, it would be the sex. HBO uses a lot of sex, and it’s not just in Game of Thrones. I think it comes from this idea that being sexual automatically makes something more mature, but it doesn’t, especially when it’s just thrown in there for shock value. So in this case, it’s just intrusive. I do have to wonder if HBO is under the impression that no one would be interested in watching the show if there isn’t sex, and it doesn’t help that just about every sex scene could be cut with the show having lost very little, meaning these scenes don’t add anything.

To be fair, the original books have a lot of sex in them as well, but at the very least those scenes mean something to the characters. Unfortunately, the show likes to include or add sex scenes that don’t amount to anything. Tyrion’s relationship with Shae doesn’t bother me and the sex between them does expand on their characters, and for the most part the sex between Dany and Drogo means a lot to them as well. But more often than not, especially when it comes to the other characters, the sex doesn’t further the plot in the slightest. Did we really need to have sex between Osha and Theon, when it didn’t happen in the book to begin with? Or do we really need to watch Bronn screw around with random prostitutes? I know we certainly didn’t need to see Tyrion introduce Pod to three unclothed prostitutes—with closeups of their vaginas—so Pod could lose his virginity.

While I know that I am probably not going to get my wish in this regard, there are still plenty of other things for me to look forward to. We’re going to finally see Jamie and Cersei back together again after being separated from each other for so long, and we’re going to see how Jamie handles being a disabled Kingsguard member. I’m also looking forward to seeing characters like Dany, Yara, and Brienne again. Dany’s journey in particular intrigues me, since for the most part, she is entirely removed from the rest of the characters and her story arc so far is not very influenced by them.

Within A Song of Ice and Fire, characters could die or be seriously injured at any moment, and no one is really safe. However, I seriously doubt that Dany is going to meet an untimely demise anytime soon. I would actually be surprised if, at the end of the series, she wasn’t the one sitting on the Iron Throne, as otherwise her parts would end up being pointless to the overall plot. She’s a force that doesn’t present an immediate threat to the other characters since she’s currently not even on the same continent with them, and I really enjoy watching her and seeing where she goes. 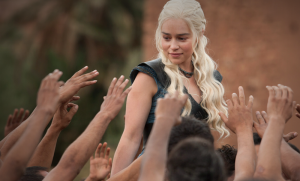 Yeah, this was a little racist.

One thing that I like about Dany is how she tries to save people who are oppressed, using her own past as an abuse victim to fuel her desire to liberate people. Yes, at the end of Season 3, she was presented a bit as a white savior who freed the PoC slaves, and that was certainly problematic. However, this season around, she’s going to run into some trouble in her attempt to help people. She’s going to learn that she can’t just overthrow a government and walk away without establishing a new order. She’s finally going to have to learn to be a queen, and I’m really looking forward to that.

Obviously, there are a lot of other talking points I could go into. I can’t say I’m particularly thrilled that I might see some more Theon-torture scenes, while there are plenty of other characters that I would love to see more of. Joffrey’s wedding is certainly something to look forward to if you know what’s coming.

Overall, I can’t wait for this season.