When we left off last season, everything was terrible, Abigail might have been (was almost definitely) dinner, and Will had just been imprisoned for Hannibal’s murder spree. Now, finally, after a long and awful HeAteUs and weeks of increasingly upsetting promotional material, Hannibal has returned to TV. My short, spoilerless review of last night’s episode goes something like this: “Oh god I was not ready why did I think doing episode reviews of this show was a good idea where is my blankie.”

…A more coherent and far more spoiler-filled review awaits you after the jump. Also, consider this your requisite trigger warning for discussions of violence, body horror, and cannibalism. It’s Hannibal, after all—what would it be without any of those awful things?

Let’s get right down to it. Maybe you’ve seen that clip of Hannibal and Jack Crawford in a life-or-death brawl in Hannibal’s kitchen? It was released earlier this week on Entertainment Weekly‘s website, where they said it was the first two minutes of this episode. Since it was obvious that, in that clip, Hannibal’s ruse was up, I naturally spent all that time wondering if it was a dream or a hallucination or what, because clearly they couldn’t actually start the season that far ahead of the previous season’s timeline.

Well, it turns out that it was a real fight, but it hasn’t happened yet in the proper timeline. Yep, they captioned the scene after that with a “Twelve Weeks Earlier…”. This was both reassuring and alarming to me; reassuring because it means that, within the space of this season, Will’s name will be cleared and Hannibal will be in trouble—and alarming because it means it’s gonna take twelve whole weeks for the puzzle pieces to fall into place. In any case, I spent the rest of the episode reminding myself that Hannibal does eventually get caught for my own peace of mind. 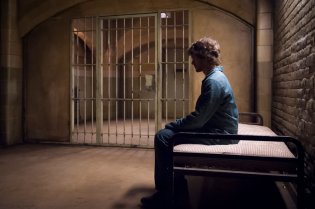 Twelve weeks before that fight, Will is in prison. They’ve finally (finally) treated his encephalitis, but he doesn’t remember anything that happened while he was sick. He’s consumed by the idea that Hannibal is the Chesapeake Ripper and is responsible for everything that has led to his imprisonment, but he has no available proof, or even memories, to go on. Over the course of the episode, several people visit him: Dr. Chilton, the prison’s psychiatrist, to try to get inside his head, Alana, to try and organize a defense and tell him about his dogs, Beverly Katz, to inquire about the case of the week (because Hannibal, despite actually being a serial killer, still can’t seem to get inside their heads as well as Will can), and the man of the hour himself, Hannibal, who maintains his “concerned friend” façade.

Hannibal is under investigation because of Will’s accusations, but only as a formality, and he is happy to ease the FBI’s way. He hands over his clothes to be pored over for fiber evidence, he lets them collect his DNA, and he even gives his own psychiatrist, the flawless Dr. du Maurier, leave to speak to investigators about their sessions. Despite Will’s claims about him, he has no cause yet for alarm—in fact, he’s been working in Will’s stead as the FBI team’s profiler. 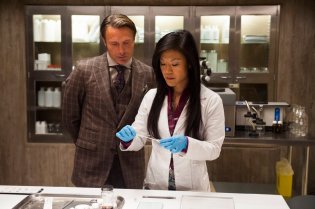 Which leads me into my one big complaint about this episode: the case of the week is sort of an afterthought. The main focus of the episode was on furthering Will and Hannibal’s story, and that’s totally fine, but if that was what they were gonna do, they should have pushed this case into next week’s episode. It suffered from lack of attention, despite going above and beyond the Hannibal standard of body horror. The perpetrator is a man has been collecting victims and well, shellacking them to preserve their skin and form. His crimes are brought to light when a few of the imperfect specimens that he’s discarded wash up in a river. Will correctly deducts that he’s been choosing victims for their skin color so that the murderer has a full color palette of pigmentation in whatever grotesque collection he’s putting together.

We don’t even get to see him brought to justice; rather, the episode ended on a new-level-of-disturbing shot of one of the model specimens waking up from his drug-induced stupor to discover that he was glued into the fetal position, naked, and surrounded by posed, glued, naked corpses. There’s an image for my nightmares. Unless this killer is actually part of the season arc and not just a case of the week, it’s kind of annoying that the first episode ended on a to-be-continued storyline. It’s unsettling enough for the audience to deal with the miscarriage of justice that is Will’s imprisonment and Hannibal’s manipulations; it would have been nice to have a lock-em-up conclusion to that storyline to balance it out.

He was waiting on Will’s porch because he loves him. Somebody do something with all these tears.

But I guess this is Hannibal… I shouldn’t expect my feelings to be treated with anything resembling kid gloves. At least there was lots of Winston in this episode! Winston is the true hero of this story. Good dog, best friend.

The end of the episode also leaves us with Will remembering how that pesky ear got in his stomach: Hannibal intubated him while he was delirious and dropped it right in there. Unfortunately, a memory does not a defense case make, and he’s left pretty much at square one. I’m sorry, Will. Eventually someone will help you.

So yeah, that was a hell of a premiere. The promo for the rest of the season promises a wild and likely very unpleasant ride ahead of us; I, for one, can’t wait.

Join me, and you too can witness the most homoromantically-framed gaslighting on TV today!

The food (and drink) is people moments: two
Swiggity Stag sightings: two
“This is my design”: zero