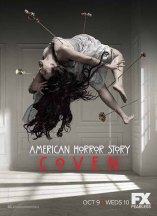 I have been an avid fan and follower of American Horror Story since Season 1, and it’s been quite the ride watching the never-ending barrage of shocking and offensive moments that this show brings us. When I found out Season 3 was to be subtitled Coven, I was extra excited. I love witches! After all, I consider myself to more-or-less be one. It quickly became clear that American Horror Story: Coven was going to be rather different than Murder House (Season 1) and Asylum (Season 2). While still a psychosexual horror show, it was less The Shining and more Mean Girls with heavy occult influences. So I guess kind of like The Craft. That is loosely the plot of The Craft.

And you thought the Plastics were bad.

Coven had a lot of potential, but did a lot of things very wrong (like refer to the power of teleportation as “transmutation”). This post is not long enough to cover all those points, so I’ll focus on just one. Like I said, part of the charm of AHS is all the appallingly offensive scenes, but generally what’s offensive is some mix of gore and/or sex. However, as a pagan, there was something I found particularly offensive this season—the portrayal of the Vodou deity, Papa Legba.

Who’s Papa Legba, you ask? He’s a loa. What’s a loa? Oh, boy. Let’s start at the beginning. Voodoo. So you know Voodoo? Sure, like sticking needles into dolls to hurt your enemies! Not exactly. Now, I hope I’m wrong, but I’m guessing the average American viewer of AHS: Coven knows little to nothing that is actually accurate about African-diasporic religions, like Vodou, Santería, or Candomblé. (My fellow author, Stinekey, wrote a wonderful article about Voodoo and Princess and the Frog, which also clears up some misconceptions and provides a wealth of links to great resources to learn more. Check it out!) Let’s do a quick overview to make sure we’re all on the same page, kiddos.

Vodou, also spelled Vodoun, Vodun, or Voodoo, is a faith or collection of faiths based in the indigenous animistic and polytheistic religious traditions of West Africa. Bear with the spelling madness here; they’re all transcriptions from various foreign languages, many of which may not have traditional written forms at all. In this post, I will keep with what seems to be the most common academic conventions: “Vodou” is used for the Haitian form of the religion, “Vodun” is more often used in regards to the original African expressions of the religion,  and “Voodoo” is  most commonly used for Americanized versions of the religion, such as those currently found in Louisiana and New Orleans in particular. When a catch-all term is needed, I will go with the “Vodou” spelling. The Vodun home region I’m talking about exists in areas of modern-day countries like Ghana, Togo, Nigeria, and Benin. During the years of the slave trade, countless individuals of many African peoples from this region, like the Ewe, the Fon, the Dahomey, and the Yoruba, among others, were brought across the Atlantic to places like South and Central America and the Caribbean.

The European slave owners forbade the practice of the traditional African religions among the slaves, forcing at least nominal conversion to Catholicism. What happened next is one of the most ingenious human endeavors of all time in the realm of religion. The African peoples hid their gods in the guises of the Catholic saints that had been handed to them. “Um, sure, we’re praying to St. Patrick… not! This is Damballah!”

I guarantee you more people have prayed to Agwe than have ever prayed to St. Ulrich of Augsburg.

Through connections more related to iconography than story, the practitioners found correlation after correlation for their deities. Agwe, god of sea and sailors? Saint Ulrich of Augsburg, some bishop who is always painted holding a fish! Erzulie Freda, goddess of love? Our Lady of Sorrows, the Mater Dolorosa, whose heart is pierced by seven swords. That Damballah—St. Patrick pairing I mentioned? Damballah is a god associate with snakes, and St. Patrick is often painted with snakes (since he drove them out of Ireland, after all). And so forth.

Now at first glance, Vodou cosmology can seem mind-bogglingly complex, but it can be oversimplified to this basic picture: the distant creator God (often Bondye or Bon Dieu—literally, “Good God”), and then innumerable other spirit beings, generally called loa. The loa, also very commonly spelled lwa, are the active spirit agents of Vodou, a very broad category that is not easily translatable. Deities, gods, angels, or just generic spirits—these are all possible analogies or appellations for the beings known as the loa. Since Bondye is beyond reach, it is to the loa that prayers, offerings, and sacrifices are made.

At the beginning of every ritual, a certain special loa is invoked: Papa Legba. Legba is Lord of the Crossroads, Opener of Doors, Gatekeeper, so he opens the channels of communication between the world of humans and the world of the loa. This role as facilitator is not unlike picking up the phone and dialing the operator to get connected to whomever you want to speak to. Believers revere him with affection and utmost respect, and he’s usually perceived as an old man with a cane or walking stick and a straw hat. In Haitian Vodou, Papa Legba was hidden in images of St. Lazarus, whose crutch represented his characteristic cane/walking stick, or St. Peter, due to the Keeper of the Keys motif.

So who showed up in AHS: Coven with the name of Papa Legba?

This top-hat wearing, coke snorting, demon-eyed Jack Sparrow-cousin burst on the scene all fire and brimstone… literally. Coven’s Legba was more some Lord of Hell than a Vodou divinity. Rather than gatekeeper between the human world and the spirit world in general, this Legba was connected with travel to a very different destination: Hell. He shared other things in common with Satan, such as accepting baby sacrifices in exchange for eternal life and youth. What do I say to this? Rude! One of the oldest tricks in the book is to take your enemies’ gods and make them demons. Even the word “demon” comes from the Greek daimon/daemon, a word that originally described a broad category of spirit beings (not unlike the loa!) that were not at all inherently evil, but could have any range of moral alignments (also not unlike the loa), and in fact were frequently benevolent. Vodou is, unfortunately, particularly prone to this sort of demonization, because many of its practices seem especially different from those typically found in the Abrahamic religions commonly practiced in the West.

So much was wrong with this Papa Legba, it’s hard to find a place to start. First off, Lord of Hell? In Vodou, Hell, as depicted/explained/understood by Christianity, is not even a thing. The afterlife is not so cut and dry, and eternal reward or punishment is not really in the Vodou mindset. The spirits of the dead transition to the other world, but remain around to be venerated and even prayed to. The distinction between spirits of the dead and the loa is not always clear, and some loa appear to have originally been the souls of departed humans, particularly in the Guede family of loa. Just as incorrect and even more damaging is the overall presentation of Papa Legba. This character doesn’t even look like Papa Legba! His iconography is much more drawn from the likes of loa like Baron Samedi, chief of the Guede loa. It is Baron Samedi and his compatriots who like the dark clothes, the painted face, the skulls, the top hats and tuxedo jackets, and who have a penchant for less than savory behavior. (Sound familiar? Think Dr. Facilier, “the Shadowman”, from The Princess and the Frog—his whole look and ambiance was totally inspired by Baron Samedi.)

Like I mentioned before, Papa Legba is treated with great respect and affection; people revere him for his key position as gatekeeper as well as his overall wisdom and power. There are already plenty of loa with not-so-nice reputations within Vodou itself that the AHS writers could have picked from to create their villain; for starters, the aforementioned Baron Samedi. Even infamous Haitian dictator François “Papa Doc” Duvalier would draw inspiration from Baron Samedi in constructing his public persona. If the writers had wanted to stick with a crossroads motif, there’s even a dark aspect to Legba, an evil twin if you will: Kalfu, a dark, mysterious, and much feared figure. To take a divinity as cherished and revered as Papa Legba and build such an evil character around him is, frankly, inexcusable. I think the appropriate course of action would have been to use a character already considered bad news by the tradition itself, or even create an entirely new character. TV shows, after all, are works of fiction anyway. 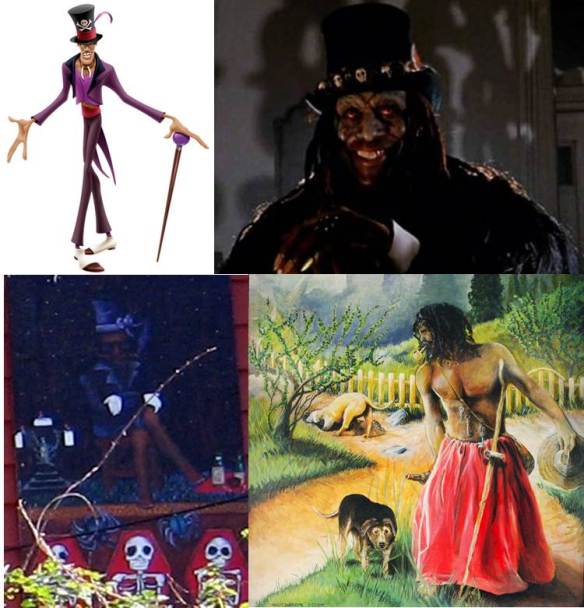 In the pagan community, there is a constant and ever-evolving dialogue going on amongst each other and ourselves about just who and what the gods of the various pagan traditions truly are. A general consensus is not forthcoming, and likely never will be. But one thing all pagans can agree on is that the gods are certainly not playthings that can be taken and disrespectfully twisted into grotesque misrepresentations of themselves for cheap entertainment. American Horror Story is a show known for its lack of tact and good sense, but I thought this was a new low. The theme for the upcoming Season 4 is still unannounced, but I’m praying that it keeps a healthy distance from religion.

24 thoughts on “Oh, My Pop Culture Vodou: Loa Misrepresentation in American Horror Story: Coven, or Will the Real Papa Legba Please Stand Up?”