I’m gonna be honest with you: I forgot this movie was even coming out this year. I feel like they only finished casting a few months ago, and there hasn’t been much hype about it in the meantime.

Then, about ten days ago, this trailer fell into my lap out of nowhere. “Shit!” I yelled at the internet. “This already?!” And to make matters worse, it looks really really good.

Look at these a-holes.

You may remember that, a few years ago, news broke out of the geek blogosphere and into mainstream news about Guardians of the Galaxy director James Gunn’s infamous “Superheroes I Would Have Sex With” list. I covered the story for this blog, and at the time, despite his heartfelt and thoughtful apology, I was left generally concerned and mostly uninterested in where this movie would go.

Then last year Marvel started a new run of their Guardians of the Galaxy comic title, and I picked it up mostly out of curiosity. Except, well, it was pretty enjoyable, and it had Iron Man in it, and I actually ended up subscribing to it. I dropped it after ten or so issues, because I wasn’t particularly wowed by the story, but it was fun while it lasted. Still, though, I felt more prepared for understanding the movie than I felt eager to see it.

Then I saw this trailer, and well, suddenly I can’t wait. The trailer has an easy humor that the comic did not have; really, the light, funny tone is unlike anything we’ve seen from the MCU so far. I find myself returning to YouTube constantly to watch it again. It’s goofy, colorful, and has taken the weirdly awkward setting and style that seemed so clashy and strange in the Thor 2 post-credits scene and actually made it look good and interesting. I’m particularly excited about Karen Gillan’s Nebula, who looks kickass and totally unsexualized. 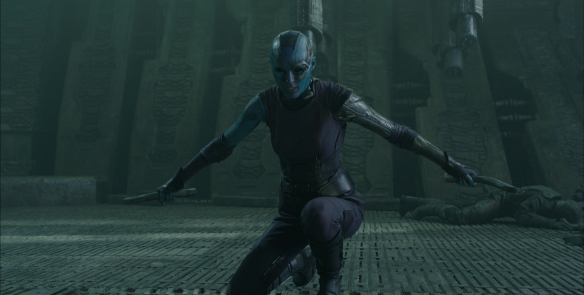 That doesn’t mean I don’t have any reservations. Am I concerned about the fact that the first major woman of color in the Marvel Cinematic Universe has been painted green, obscuring her race? Yep. Am I annoyed that canonically queer female couple Moondragon and Phyla-Vell, traditionally members of the Guardians, were cut from the movie? Absolutely. Am I irritated that Gamora, one of maybe three women in the MCU who are considered superheroines (the others being Widow and Sif), is shown topless in the trailer? Well, not so much. Gamora is a very Red Sonja-ish character; she fights, fucks, drinks, and kills with abandon, and she is certainly the type of character who has no-strings-attached sex when she feels like it. I’m going to wait and see how this is handled in the movie, of course, before signing off on it entirely, but for right now I’m not super-concerned. Furthermore, based on the contents of the trailer, I’m no longer apprehensive about the possibility of this movie being a Carol Danvers Captain Marvel vehicle.

So there you have it: my complete one-eighty into an eager and excited Guardians of the Galaxy fan—who woulda thunk it? What did you think of the trailer? Hit me with your thoughts in the comments!

4 thoughts on “Trailer Tuesdays: Guardians of the Galaxy”