If there’s anything we’ve learned from Disney over the years, it’s that princesses sell. In fact, even if a girl isn’t a princess, she ends up being turned into a princess all for the sake of marketing—is it any wonder why toys of Lilo and Stitch are no longer being made despite the strength of the film itself? There’s something timeless about a princess, or at least the concept of them, and the movie industry hasn’t been the only one to notice this. Many modern games still employ princesses as a trope or a stand-in collectible, both of which aren’t really ideal for the representation of ladies in games. But let’s bring this back to marketability and the line-up of one very specific puzzle in the 3DS Mii Plaza. 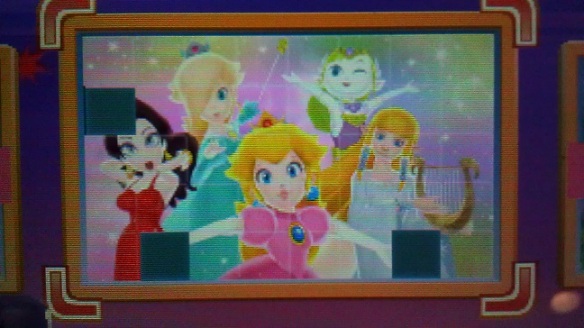 Ever since I saw it, I knew that I’d have to complete the ‘Nintendo Starlets’ puzzle no matter how many people I’d need to street pass to get the pieces. Obviously I knew Princess Peach would be on there, but the other characters were a mystery to me: which female characters would Nintendo deign to put on the same rank as the pinnacle of princessliness herself?

As I continued getting pieces, though, I became more and more disappointed. Rosalina was the next princess I unlocked: not unexpected, and my feelings on her are rather neutral. Then Zelda. Then… Zelda again. And finally Pauline. I don’t know about you, but there’s something incredibly boring about this group. The disappointment came twofold: from a girl who didn’t sign up for a puzzle called “Nintendo Princesses” and from a Nintendo fan who knows that Nintendo has a wealth of female characters to choose from, or at least enough that they didn’t have to use Zelda twice.

By using ‘starlets’ in the title, this one puzzle opened a fantastic opportunity for Nintendo to introduce a whole new generation to different female characters off their roster. Obviously they were willing to stretch themselves, putting in Pauline and everything. I have nothing against her, but out of every Nintendo character she’s about the least developed one, only appearing in Donkey Kong as Mario’s old flame, whose only purpose is to be abducted by the titular Kong himself. Even if she recently had a revival in the newer Mario and Donkey Kong series, I wouldn’t call her a ‘starlet’, nor would I think her popular enough to add over say, a certain princess from Sarasaland. If I had any hope of Pauline getting any better characterization from this, I wouldn’t mind as much, but they’re wasting a spot—assuming they had to stick to only five women—that could have been used to showcase other characters that held some importance over being a damsel trope. 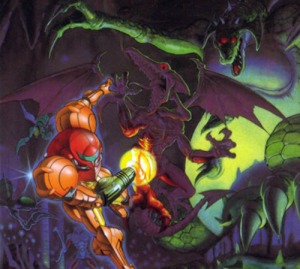 Or, you know, Samus.

For example, with all the games Kirby has been getting recently, why couldn’t they use a character from that series? If they’re pulling from the television series (which, while not as popular overseas, had over a hundred episodes in Japan) they could have used the intelligent and caring Tiff, daughter of one of King Dedede’s attendants. From the games, they could have used Adeleine, a painter who has the power to bring anything she paints to life. Or, going back to a previous game series, with all the popularity the current revival of the Donkey Kong series garnered, why didn’t they put in Dixie Kong? Development for that game started before the release of the puzzle. Hell, even the Star Fox IP has Katt and Crystal. And my little odd-games-loving heart would be distraught if I didn’t mention Kumatora from Mother 3, even if there is no way that Nintendo would ever promote the Earthbound series in the US again after the debacle with Earthbound’s (Mother 2) advertising campaign back in the 90’s.

I think my biggest problem—okay, maybe second biggest—with this is the inclusion of two Zeldas. I know why they did it: the two Zeldas are completely different from each other and take on two different timelines of games or, more importantly, aesthetics of games from the more realistic Skyward Sword and the cartoonier timeline starring Toon Link. However, if they were going to tackle both of those, couldn’t they have at least left the Toon Link Zelda as Tetra? As Zelda fans know, in that timeline, Princess Zelda is actually the smart-mouthed pirate Tetra, a much different interpretation of the princess than had ever been done before. Ignoring the fact that Tetra (a clearly tanned girl) turns white when she turns into a princess, I think Nintendo is really doing a disservice by not addressing that part of her character, especially since she loses that spunk that sets her apart from most other Zeldas when she becomes a princess. But, as I mentioned earlier, this is all about marketing and princesses sell. However, Nintendo may be learning that the girls gaming market isn’t all about that, at least not all the time.

In recent days past, Nintendo has been making an unprecedented push to appeal to girl gamers, building up to the release of their ‘Nintendo Girls Club’ just last month. Unsurprisingly, the channel faced multitudes of backlash from gamers everywhere, and watching the video, you can see why.

This idea is not bad in theory, but in presentation it’s like some executive was like “girls like pink right? Let’s make everything pink.” Girls do like pink, but we also like red, blue, black—hell, we like the whole damned rainbow. Don’t keep the rest of the color spectrum barred from us just because of some sexist notion that your games won’t sell if you show us games that might deviate from what someone would immediately think of as the “girl gamer”.

Marketing can be a great way to see which things are popular with people, but it always carries with it the problem of being stuck in the antiquated notions of the past. There’s a time and place for princesses and sparkles, and they can be a great way to get some girls into the gaming scene, but larger companies cannot pigeonhole every girl into this category. Nintendo made a huge misstep with their Girls Club and with the distillation of their ‘starlets’, and I can only hope they learn from this experience.

3 thoughts on “Games for Girls: Nintendo’s Failed Grab for the Girl Gamer Crown”