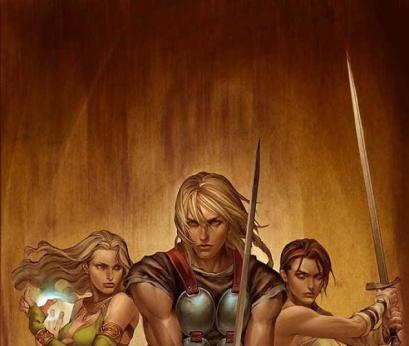 Last week, I talked about “The Warriors Teen”, the first section in Son of Asgard, a twelve-issue story about Thor’s youth by Akira Yoshida and Greg Tocchini. In some ways, I like “Enchanted” more than I like “The Warriors Teen”, but in other ways, I find “Enchanted” very problematic. It does have a lot of positives; for starters, it really delves into the issues Sif faces as a female warrior in a male-dominated world, but unfortunately, the story falls into many sexist and stereotypical traps along the way.

Spoilers ahead, and a trigger warning for sexual assault.

“Enchanted” begins with Thor, Sif, Balder, and other warrior students training in the Fjornor Fields. Sif faces off against Volstagg, who has reservations about fighting, even if it’s against someone of “the lesser sex”. Sif makes quick work of him, then scolds him, claiming that he should train harder so he can back up his insults. Next, she faces Thor, who easily defeats her by knocking her over and grabbing her hair from behind. During the match, Thor also mocks Sif for her abilities while the other students cheer him on—“No way the only girl in our school could take you!”—and afterward, when Thor tries to help her stand back up, Sif shrugs off his efforts and storms away.

Loki, our child sociopath who spent the entire last arc attempting to murder Thor and his friends, is, for some inexplicable reason, still allowed to wander around Asgard without any kind of supervision. He watches the match and takes pleasure in Sif’s defeat at Thor’s hand. Loki wants to get back at Sif for something she did to him in the last arc, because, as he says, “No woman gets the better of Loki!” After that misogynistic statement, Amora, Loki’s fellow magician and often his partner in crime, appears and tells him that both he and Sif should be kindred spirits, since Sif is the only girl in warrior training and Loki is the only boy studying sorcery.

I’d have thought you and Sif got together for tea to commiserate about your hatred of the opposite sex. 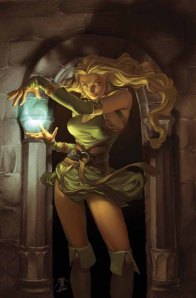 Thank you for that, Amora.

Despite her jabs, Loki and Amora find common ground in their dislike of Sif. They team up to take Sif down, because Loki’s evil and Amora wants to have Thor to herself. This is the first problem in this arc. Amora, our evil enchantress, is only motivated by her desire of Thor. In some ways, I’m not surprised, since Amora’s affections for Thor have always been a driving motivation for her character, but it’s a shame that here she doesn’t come across as anything other than a seductress chasing after men. 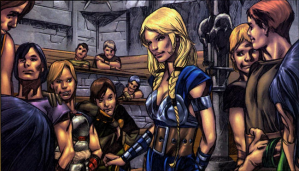 From here on, things only get worse. Later that day, Amora verbally lashes out at Sif and essentially slut-shames her in the process. Sif, who had already been feeling dejected at her role in society, doesn’t take the insult well. Matters only worsen when another girl, Brunnhilda, joins Sif’s class and the two of them clash immediately. Sif ends up starting a fight with Brunnhilda, and when asked what happened, Thor truthfully tells their instructor that it was Sif’s fault, much to her dismay. After Sif is kicked out of class for the day, Amora shows up once again to get under her skin about Thor’s treatment of her. This leaves Sif emotionally open for Loki to trick her, claiming that he’s been on Amora’s bad side as well and so he knows what it’s like. Under Loki’s guidance, Sif steals a magical mirror—the Mirror of Mycha—that she can use to bewitch Thor into falling in love with her. 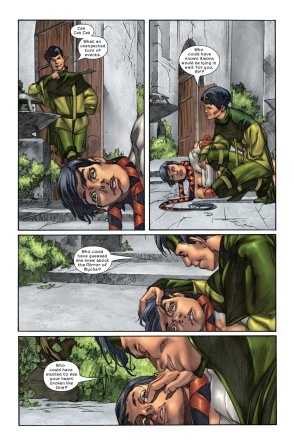 However, before she can use the mirror, Amora immobilizes her with magic, and then bewitches Thor in front of Sif. While Thor and Amora are “in love”, Loki frees Sif from her enchantment so she can move again, but not until he reveals to her that this was all part of his and Amora’s sinister plan. After Loki teleports away, Sif attacks Amora, only to have Thor tell her off.

Brunnhilda figures out what’s happened, and confronts Sif in her role regarding Thor’s enchantment. Sif tells Brunnhilda the truth, and the two of them end up bonding after Brunnhilda gives her some much needed emotional comfort and admits her own faults for provoking Sif earlier.

Sif and Brunnhilda then head off to confront Loki and Amora. After yet another brief fight that Thor interrupts, Brunnhilda breaks the Mirror of Mycha, freeing Thor from his enchantment. This is also about the time that Loki and Amora magically disappear from the narrative. They’re literally just gone. We never find out what happens to them after this scene. That said, Thor is naturally angry with Sif for sinking to Amora’s level and attempting to control his emotions in such a way, and their relationship seems to be in tatters. 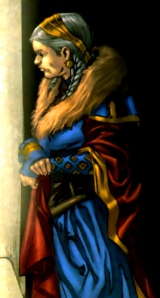 Sexual assault is okay as long as you don’t remember it. I’m Frigga and I approve this message.

A few days later, Frigga goes to talk to Sif to assure her that all is forgiven and that the kiss that Thor and Amora shared doesn’t count as Thor’s “first kiss”, because he was enchanted. She says that there’s nothing for Sif to worry about since the enchantment is broken and Thor doesn’t remember what happened while he was under it. What the hell?

Sif goes to Thor and apologies, even though she doesn’t expect his forgiveness. Thor, for his part, does forgive Sif for the role she played in what happened. The two kiss. Then, they head off into the sunset holding hands. The end.

Mostly, what I like about “Enchanted” is that, like the rest of Son of Asgard, it’s still a different story than what happened in either the Thor live-action movies or the animated feature, and since it’s all about Sif, the story has a lot more time to explore her character and add some depth. We get some of this in Tales of Asgard, but “Enchanted” does more with Sif’s character, which makes her issues more personal and relatable to the reader. Additionally, as a female comic book reader, it was nice to read a comic that felt very inclusive toward a female audience and attempted to talk about these gender issues.

Sif is mocked for going against gender norms by choosing a role for herself that’s typically considered more masculine. And within that role, she’s constantly told that she’ll never be as good as her fellow male students. After years of dealing with these microaggressions directed at her gender, it does get her down, and she lashes out. She’s self-conscious and views herself as a failure in more ways than one. Additionally, now that she’s older and Thor has yet to start returning her affections and even occasionally partakes in her disgrace, she only feels it more keenly. She tells him:

I’m a woman who spends all her time in the company of men. And it’s starting to get a little tiresome.

Not only that, but when she and Thor start to have a moment, Amora slut-shames her, insinuating that Sif worked her way through all the boys before she got to Thor. As such, not only is Sif being mocked for not being a stereotypical girl, her sexuality is also under attack. And through Sif’s eyes, the audience can easily understand why these things are problematic. The scene Sif and Brunnhilda share when they bond is also quite nice, and I enjoyed that Sif was finally able to find a kindred spirit and friend in Brunnhilda. Brunnhilda reminds Sif that they’re both warriors, and that they “madiens must stick together”. It was a bit of a touching moment.

However, “Enchanted” still has a lot of problematic themes. To start off, there’s Amora, who, as I said, has no depth at all and is only motivated by Thor, making her less of a character and more of a random plot device. And though I enjoyed Brunnhilda, in the end, she really only existed to give Sif someone to relate to and didn’t have much of a character arc herself. I also wasn’t a fan of how the comic pitted Sif against both Amora and Brunnhilda. While I could understand her conflict with Amora, Sif’s fight with Brunnhilda was completely unnecessary. 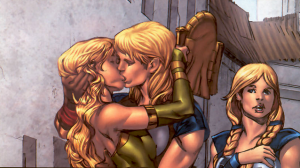 He doesn’t remember it, so it’s fine, right? Right?

But “Enchanted” mostly fails when it comes to the spell Thor falls under. The arc rightfully portrays what happens to Thor as evil and wrong, and though Sif does show remorse for her role in the issue, she is very easily forgiven. That said, nothing compares to Frigga writing the whole incident off since Thor doesn’t remember what happened to him while under the enchantment. That is not an okay message to send. Sexual assault does not spontaneously become better or even acceptable just because the victim cannot remember what happened to him. And I am completely insulted that the story thought it was okay to say that. 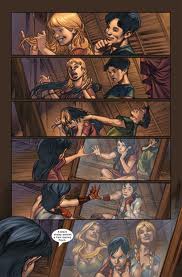 And that’s unfortunately not the end of the problems. I mean, plot-wise, I have no idea why Loki even had enough freedom to be in this arc. Saving Asgard in the last one doesn’t excuse or erase the fact that he attempted to murder Thor for the past six issues. And I can’t even begin to comprehend what’s going on through Odin’s head in regards for Loki. This version of Loki is not like what we we’ve gotten used to in the cinematic verse, or even in the newer Agent of Asgard comic. He’s not simply morally misguided. He’s not even driven to evilness while still having redeeming qualities buried under the surface. He’s just straight up psychotic. A child his age doesn’t start attempting murder unless there’s something significantly wrong with him. And he is still a child—hell, he crosses his fingers behind his back when he lies. Is it too much to ask for Odin to give a shit about his own son? I realize that Loki is the only one responsible for Loki’s actions, but that doesn’t excuse Odin’s absence. By not dealing with this problem, Loki’s only going to get worse and start causing more havoc—havoc Odin could easily prevent.

Not making the matter any better, in “Enchanted” Odin and Frigga both imply that Loki is not even their child. Frigga calls Thor their only son and Odin does not correct her. No, I’m sorry, Loki being adopted doesn’t make him any less their son, and they are both responsible for him. I don’t think it’s too much to ask them to do something.

So yes, I still really liked this arc, but it had a lot of problems, and unfortunately, they are serious issues that should have been handled a lot better, especially the sexual assault. It’s still a story that I would recommend reading, if only for the insight into Sif’s character, but “Enchanted” has a lot of failings that are not easy to ignore.