Ugh. Ugh ugh ugh. I am so over this show.

Several Teen Wolf actors let hints drop on Twitter before “Insatiable” aired that there would be a major character death this episode, and they weren’t kidding. Let’s see if I can make it through a recap without ragequitting and then I’ll tell you how bogus and stupid said character death was.

Needless to say, spoilers below the jump.

Last episode ended with the nogitsune splitting from Stiles and kidnapping Lydia. This episode therefore begins with everyone trying to find Lydia, and that is, in fact, most of the episode.

Some other things happened on the way, though: first and foremost, a lot of parent-child interaction. Mama and Papa Yukimura both have something to teach Kira about the game of go; Stiles, now healed, reunites with his dad at the police station and they hug it out. (It’s still unclear if Stiles still has a brain disease or if that was all just nogitsune flash.)

Scott and Papa McCall have a heart-to-heart in which Agent McCall explains that, when Scott was a kid, he accidentally knocked Scott down the stairs when he was drunk and arguing with Melissa. He left them shortly after out of fear that he would hurt Scott again. Scott takes this pretty well in stride, saying that he’s accidentally hurt himself hundreds of times and that what really hurt was the abandonment; he challenges his father to stop running away from his family.

Allison and Chris also have a touching scene; Chris tells her that she’s basically graduated as a hunter and wants her to forge a ceremonial silver bullet, but Allison decides to make an arrowhead instead since she fights with a bow. Allison, worried about the nogitsune and losing her father as well, also takes this time to tell her dad that she loves him and is proud of what he has grown into. 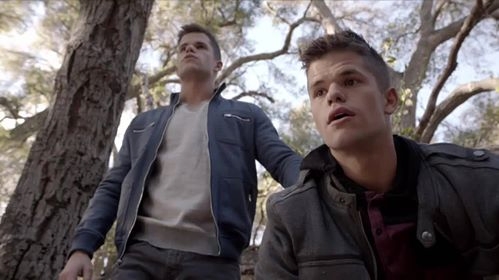 At some point, the twins get shot with wolfsbane bullets. Derek saves them, which seems like a weird character choice given the suffering they’ve put him through. I hope they die.

Amidst all these heartwarming moments, the hunt for Lydia continues; eventually, they track down a girl who’s escaped from Eichen House—Meredith, who you may remember as the generically crazy girl talking into the payphone from “Echo House”. Meredith can hear voices—among them, Lydia’s. She gives them Lydia’s location, and they race off to save her.

When they get there, however, they run into Noshiko, who still refuses to believe that they can stop the nogitsune short of killing it. Scott of course is against this, because even though it’s split physically from Stiles, it’s still draining his life force. Therefore, killing the nogitsune would still kill Stiles.

Scott and Stiles go to get Lydia, but she’s not happy to see them; being a banshee and all, she can sense the horrible character death approaching. True to form, the nogitsune appears back up where Kira, Isaac, and Allison are standing, and seizes control of Mrs. Yukimura’s oni. They set upon the teens and things look dire, although Allison is able to wound one with her new silver arrowhead. Because of course we just can’t have nice things, this makes her the premiere threat to the oni and she gets run through. She dies tragically in Scott’s arms as everyone watches, including Chris. The nogitsune escapes again. Roll credits.

Take it away with my reaction, Jill:

Allison’s death was the most tropey and awful death scene that this show has given us since they killed Boyd, complete with an Éponine-esque “I don’t feel any pain” moment (because despite being seventeen and having literally everything to live for she wasn’t afraid to die), a dying declaration of love to Scott (even though Isaac was right there and she had made a point earlier in the episode to tell Isaac that she liked being with him), an unfinished “Tell my father…” (tell him what? you already made your peace with him earlier in the episode), and a dramatic close-up of her hand falling to the ground to symbolize in cinematography-speak that she is really undeniably dead.

Scott never at any point offered her the bite, which totally could have saved her, even though he was happy to offer to bite Stiles a few episodes ago. Also annoyingly, her final words were all about the men in her life. She didn’t ask if Lydia was okay—even though saving her best friend was her reason for even showing up—she babbled about how she was finally happy in her true love’s arms and stammered an unfinished message to her father.

It turns out that Crystal Reed had been planning to leave the show, and Jeff Davis promised her “a great ending”. That did not mean he had to fucking tragically kill her character off, which, I could argue, is the worst sort of ending. This isn’t a brilliant tragic David Tennant-esque “I don’t want to go”, it’s Kevin fucking Tran all over again.

This is symptomatic of a larger problem in Teen Wolf, where the (white) male characters who are defeated in battle or whose actors leave the show get to live and the women. all. die. Mama Argent: dead. Gerard: alive. Kate: dead. Alpha twins: alive. Jennifer: dead. Deucalion: alive. Allison: dead. Jackson: alive. Erica and Boyd: dead. Peter: alive. Even Coach Finstock survived an arrow to the gut. It’s getting kind of sickening coming from a show that claims to be as progressive as it does. The only disappeared women who are ostensibly alive are Cora and Braeden, and Cora’s actress has left the show.

The next episode is the season finale, thank God, and you know, despite my love of the game I can’t even get excited about the fact that the title, “The Divine Move”, is a go reference. Tune in next week for manpain, sad Chris Argent, and possibly a funeral. And probably they’ll defeat the nogitsune but really, who cares?