Cabaret is returning to Broadway next month for its ninth major production in one of the two greatest holy cities of theatre: New York and London. That’s right, nine times. Let’s count the ways: Broadway opening in 1966, West End opening in 1968, London 1986 revival, Broadway 1987 revival, London 1993 revival, Broadway 1998 revival, London 2006 revival, London 2012 revival, and the upcoming Broadway 2014 revival (not to mention a 1972 film adaptation). Whew! That’s not an accomplishment many musicals can claim. What is it about this show that makes it so enduring? What makes it a force that keeps popping up again and again, demanding to be seen and heard? Let’s take a closer look.

Last month, I finally got the chance to watch a performance of Cabaret at my college alma mater. (All photos to follow come from this February 2014 production of Cabaret at Saint Vincent College.) Going in, I knew little to nothing about the show; I haven’t even seen the famous Liza Minnelli movie (I know, what kind of gay man am I?). But the actors, crew, and musicians quickly drew me into this mesmerizing work of musical theatre. The glitz, the glam, the pleasure, the pain; they all came together to weave a show that was, well, I hesitate to call it entertaining. Was I entertained? I think it would be more accurate to say I was captivated, enthralled, and, at times, devastated. 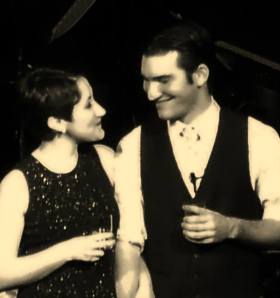 Look at the beauty of young love. This show is gonna be full of warm and fuzzy feels, right? Wrong. So wrong. Your heart is going to be broken into a million pieces. Sally Bowles (Maria Kegg) and Cliff Bradshaw (Brandon Snyder). Photo credit: Penny Lambright.

What makes Cabaret pack such a punch of pathos? Sure, it has great music, from the acclaimed team of Kander and Ebb, perhaps better known by the masses for Chicago, a show they wrote almost ten years after Cabaret. But to me, Cabaret’s stories are more important than the songs. These stories are based on the semiautobiographical writings of Christopher Isherwood, found in a collection known as Goodbye to Berlin, which in turn inspired a play named I Am a Camera before being adapted into the show Cabaret. This is a show about two very different people falling into each other’s lives who were never going to work out as a couple in the end. It’s a show about an older couple making stumbling efforts towards a relationship that will not survive the political storms of the time. It’s a show about 1930s Germany, a country about to turn on itself in the worst possible way. I think to sum it up: it is a show about doomed things. 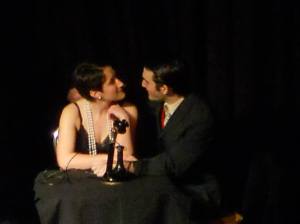 The couples’ fates are not apparent from the beginning, letting the audience members build false hope. Cliff Bradshaw is a young American writer who has gone to Berlin to write a book. (This was back when somehow starving authors could afford to do things like travel to other continents and stay indefinitely in lavish European cities. Sign me up for this plan.) While there, he meets Sally Bowles, a young English woman who’s living the fast life as an ex-pat cabaret singer. They meet at the club where she performs, and before they know it, she ends up in the room he’s renting, and in his bed, and in his heart. However, by the time the musical ends, in their final parting scene, we recognize that they are simply like millions of other couples that enjoy each other for a time, but don’t end up working out. There is no Romeo and Juliet magic here, and it’s refreshing to see a musical couple that isn’t about that One True Love, but rather more reflective of the everyday heartaches and break-ups that inevitably happen in the vast majority of relationships. This pain is of course tragic in its own way, and infinitely relatable. I also think it’s noteworthy that while Cliff’s Kinsey score is never explicitly stated, he has clearly had his share of relations with men, but this is not a prime factor in their break-up. They are just people wanting very different things from life at this particular point in time. 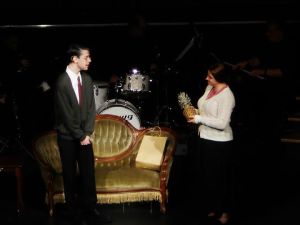 The other couple’s outcome is somewhat more complicated. Fräulein Schneider is the matron renting out rooms in the boardinghouse where Cliff stays during his time in Berlin, and Herr Schultz is a local fruit vendor enamored of Fräulein Schneider. Watching the budding romance between two elderly people is a nice contrast to that of Cliff and Sally. Their courtship is exceedingly awkward, but in a completely endearing way (there is a literally a part where she sings about how stoked she is that he gave her a pineapple as a gift). They end up engaged, but at their engagement party it is brought to the forefront that Herr Schultz is Jewish, amidst the rising tides of anti-Semitism as portrayed by the characters either involved with or supportive of the Nazi Party. In the second act, we find that Fräulein Schneider has broken off the engagement due to her fear of the consequences of marrying a Jewish man, socially as well as from a business point of view, as a proprietor of a boardinghouse. Her choice is one that is extremely difficult to excuse, but unfortunately easy to understand.

The show of course also provides us with a dark foreshadowing of the coming storm of Nazism and World War II and the horrors that would rise in Hitler’s reign. The fact that the audience has foreknowledge of Germany’s imminent collapse into the Nazi regime makes the hopes of the characters that much more painful. As I mentioned before, in hindsight we can see the tragedy of the couples, but without having seen the show at all, we all know how bad things got in Nazi Germany. I think this element of the show can be most succinctly summarized by one line uttered by Herr Schultz. When people try to explain the growing issues regarding public opinion of Jews and what the future holds for their status in Germany, Herr Schultz states simply, “But I’m a German.” His blind faith in his own status as a German citizen is devastatingly heart-breaking in light of what we all know is to come. 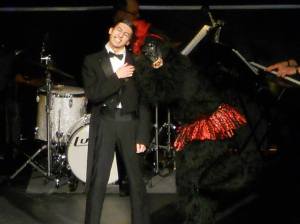 What could possibly go wrong with this? The Emcee (Mark Harris) and Gorilla (Mickey Orange). Photo credit: Penny Lambright.

The portrayal of this insidious growth of prejudice has a particularly memorable moment. There is a very strange scene in which the enigmatic Emcee of the cabaret dances with a person in a gorilla suit; the song, “If You Could See Her”, at first seems to be a silly, goofy nonsensical number in which he sings his devotion to this ape girlfriend of his. That is, until the last line: “But if you could see her though my eyes—she wouldn’t look Jewish at all.” It’s hard to express the full level of shock, horror, and revulsion I felt when I heard that line; it was a sick, sour feeling in the pit of my stomach. The dehumanizing travestyof prejudice and discrimination is one of the absolute worst stains on humanity’s conscience, unfortunately one that seems to have lasted in some form or other the entirety of human history. (You can watch the film adaptation’s version of this scene here. Warning, it really is quite upsetting, in my opinion.)

So why does Cabaret keep resurrecting itself, why will it likely have a twelfth and fifteenth and twentieth revival? Not because it’s a gay old time, fun for the whole family. No, I think it abides because it so fully encapsulates the pains of life. On a personal level, we have the reminder that most relationships are doomed to end, for one reason or another—an unfortunate truth that many if not all of us will have to face at some point in our lives. And much more importantly, on a societal level, we have a glaring portrait of the power and danger of prejudice. We cannot forget the unforgivable acts of injustice and horror committed during the Holocaust, nor can we continue to turn a blind eye to the injustices and discrimination that continue to plague our world today. We still live in a world where being the wrong skin color or religion or sexual orientation can mean denial of service in various establishments, or denial of much more basic human rights. Come to the Cabaret; not to be entertained, but to have your eyes opened. Long live Cabaret. 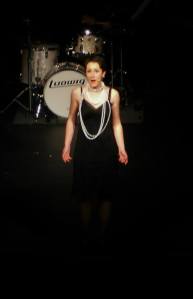