Well, ladies and gents, I hope you weren’t too desperate for teen eye candy this month, because Loki is conspicuously absent from his own title. That is to say: New Loki is absent and Old Man Loki is back and more devious than ever, so if you’re into old man, this is your kind of issue.

“But wait,” you exclaim, in the hypothetical conversation I imagine we are having, “isn’t Old Loki gone forever? Wasn’t he killed”—and here I imagine you count pensively on your fingers—“like… a ton of issues ago and reincarnated into a totally new body?”

All of these hypothetical observations you have (or possibly haven’t) made are very astute and very correct, but you have failed to account for the fact that this is Marvel and, by virtue of Comic Book Logic, nobody ever actually dies. I’m still waiting with bated breath for the giant otter Loki killed to make a comeback and be given its own series. 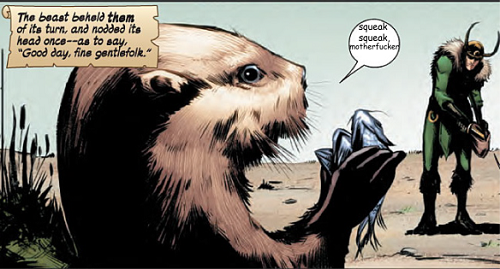 In this issue, Old Loki conspires to change New Loki’s fate. Marvel universe rules dictate that the lives of gods are not quite as linear as the lives of mortals: gods are governed by a cosmic set of rules. Loki, like all the gods, embodies a specific role and is characterized by specific motives and behaviors that are constant throughout all of history and all possible universes. By starting his life anew and choosing to change his behavior, Loki has disturbed the cosmic order. Gaps have opened up in the past, allowing Old Loki to meander through his own timeline as he wishes, making tweaks that seem likely to end in tragedy.

His first stop is Odin’s childhood, where he befriends the young prince and then kills the aforementioned giant otter. Because of some sort of cognitive defect that prompts Odin to trust the sneakiest looking creep on the planet, Loki is able to persuade Odin to eat some tasty giant otter meat and wear the fur as a cloak. 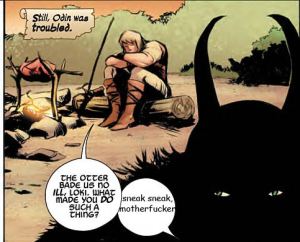 How did you ever become a leader, Odin?

Surprise, surprise: the otter was actually a young man in the form of an otter, and otter-boy’s family is pretty pissed that he was skinned and eaten.

Loki proceeds to valiantly get Odin out of the very predicament that he had gotten him into (this is kind of Loki’s M.O.) and Odin is so relieved that he promises Loki a favor, which we all know is a terrible idea. Loki pops into the timeline again, decades later, and asks Odin to fulfill his debt by building an unbreakable box, which Loki then uses to house Gram, the stolen sword of Sigurd, so that Loki’s reincarnated self will find it at some point in the future.

As it turns out, all of this otter-killing nonsense also set in motion the events that led Sigurd to acquire Gram and become immortal, and being that he’s a legendary hero, he wasn’t too pleased to find that somebody had taken his stuff.

Most of this issue is a throwback, filling in gaps in existing narrative rather than progressing Loki’s character or storyline, but it does reinforce the critical difference between Old Loki and New Loki. Old Loki disdains his new incarnation, and is specifically displeased about the traits in New Loki that he considers effeminate. 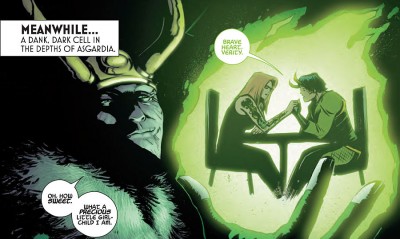 Personally, I think the old man needs to do some introspection about his nail polish and all his incessant whining before he calls anyone else a “child”, but that’s Loki for you.

The person we really need to talk about this issue is Sigurd. Sigurd the Ever-Glorious. Sigurd the Only Notable Asgardian of Color Besides the MCU’s Idris Elba as Heimdall. Sigurd the Significant Three-Dimensional Character with Flaws and Complex Emotions.

Sorry, I’ll stop with the titles. Sigurd is an Asgardian hero who became immortal by eating a dragon’s heart (top that, Daenerys Targaryen) and fled Asgard during the reign of Bor, Odin’s father. Most readers anticipated his appearance in the story because of the released cover art for issue four, but seeing him an issue early is a bit of a treat. 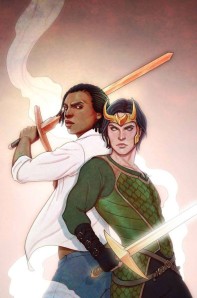 I smell a reluctant team-up.

Sigurd has appeared in other comics before, but his presence in this run is significant because Agent of Asgard has a readership comprised at least partly of Marvel Cinematic Universe fans. Bafflingly, there was a notable outcry over the fact that Idris Elba was cast to play the character of Heimdall in the Thor films. Certain parties seemed convinced that a race of entirely fictional beings based loosely on ancient mythology could only be… white people.

Of course, most reasonable people realize this is ridiculous, but writing a highly visible and significant black Asgardian character into a new storyline is good affirmation for new readers that Asgardians can indeed be people of color and that no explanation is necessary for why they are not white.

Sigurd’s only known motive so far is to get his sword back, but he and Loki sure don’t seem to be at each other’s throats on the new cover. I can’t wait to learn what filthy lies Loki has spun to keep himself from being pummeled.

Also, as an aside, Sigurd is pretty hot, so let’s give Lee Garbett a gold star.