Recently we got an email from a young fan which, among other things, told us about this petition for Disney to make a plus-size princess. Creator Jewel Moore, an American high school student, said on the petition, “I know many younger plus-size girls and women who struggle with confidence and need a positivie (sic) plus-size character in the media. I want there to be a character for those little girls to look up to.”

That’s certainly a laudable goal, and from even a cursory look at Disney movies, we can tell that they use a cartoonish, overly dramatic, white feminine form as a standard for their princesses (in Disney’s most recent movie, Frozen, the girls’ wrists are thinner than their huge eyes). Beyond the usual argument that Disney only makes stick-thin model princesses, though, it’s clear that Disney has a very exacting definition of feminine. All the princesses are thin, yes; all of them also come armed with varying virtues like determination, kindness, intelligence, and integrity. They even all have long hair. Disney has defined feminine in such a way that if a girl doesn’t squeeze herself within these narrow confines, she’s practically labeled “not a girl”.

And well beyond the iron fist of Disney, it seems that the rest of our media content has also adopted this definition of feminine. There are rarely fat characters on TV, and if they are, the characters are stereotypes obsessed with either eating or losing weight; they aren’t fully developed characters. Similarly, there may be female villains, but there aren’t female jerkwads on the side of good, as Dom recently pointed out. This fear of the so-called “unfeminine” only adds to continuing negative attitudes toward women, while doing nothing to advance the creation of more varied, interesting characters and plotlines.

It shouldn’t come as a surprise, I hope, to say that promoting unhealthily thin girls as the norm in media can affect girls’ self-esteem. It’s entirely possible that a negative, unrealistic depiction of the female body can contribute to eating disorders in some way, even if this depiction doesn’t directly cause said disorders to develop. Any media content—TV shows, video games, books, etc.—can be at fault for this. Even the Barbie doll, which has long been a staple of childhood games, isn’t above reproach. An English study on Barbie dolls and body image concluded:

Very young girls experience body dissatisfaction after exposure to Barbie doll images but not after exposure to Emme doll (or neutral control) images. This demonstrates that it is not body-related information conveyed by dolls per sé that has a direct impact on young girls’ body image, but by Barbie dolls specifically, which represent a distortedly thin body ideal.

In other words, seeing how thin these Barbie dolls—and one can infer, media characters—are can make a child dissatisfied with her own body, because it encourages a mindset that being thin is normal, when that’s certainly not the case for every person. (And although this isn’t a post about race, racial representation is also a factor in self-esteem: there are very few, if any, realistic dolls of races other than white, even though some toymakers are trying to turn the tables on that.)

Beyond body image, girls in pop culture are lauded for their virtues: one rarely sees a female version of Thor, who starts out arrogant and slowly learns to be less of a dick. Instead, if women do lead a story, they usually start out naïve or unskilled and slowly, using their virtues, build themselves up. Rapunzel does this in Tangled, using her natural curiosity and kindness to escape her abuser; outside of Disney, Agents of 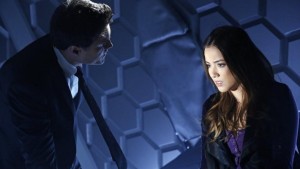 S.H.I.E.L.D.’s Skye is a pretty hacker who’s shown that there’s much she doesn’t understand about S.H.I.E.L.D.’s secret workings, and pretty much every Doctor Who companion is a girl waiting to be shown all of time and space by the Doctor. Many recent Marvel ladies are excellent characters (Peggy, Natasha, and Pepper being only a few), but their stories aren’t about learning to be better people; they are already fully-formed “good” characters. In short, they aren’t allowed to learn to be virtuous; they must be virtuous from the start. (Natasha could subvert this really nicely, if Marvel would ever give us that standalone Black Widow movie like they keep promising they will. Come on, Marvel!)

So this generally accepted definition of feminine, particularly in Western society, has resulted in men and women both internalizing this message that all women should look and act a certain way. This brings us to the flip side of the coin: if unfeminine women exist, their story revolves around learning to be feminine. If there’s a tomboy character, she’s given a makeover and told she looks pretty in a dress. If there’s a plus-size or fat character, she’s either the comedic relief or she’s obsessed with losing weight. I suppose it’s only to be expected in a society where a long-haired girl cutting off her locks is still seen as a political statement, but the situation is ridiculous and saddening. What’s even more frustrating is that existing unfeminine women are often used as a foil to the feminine ones—the feminine character is actively trying to not be like the unfeminine ones, or the unfeminine characters are bullying and putting down the feminine ones. Such one-dimensional characters only support a “I’m not like those other girls” dichotomy that’s the opposite of helpful.

We do find the rare fat-positive manga or video game character; Brienne of Tarth from Game of Thrones is a buff, muscular, cold warrior who is canonically described as ugly. That’s progress, if minimal, and it’s led to more varied characters and plotlines than the same recycled ones we’ve seen time and again. But the subconscious belief that women should all fit the Disney version of feminine still exists. We only have to look at fatphobia in YA or female characters who can only be “strong” to see that. If we flipped the genders of one of Disney’s stories—if we changed Beauty and the Beast to the story of a hulking, hairy, abrasive woman and a handsome, quiet, bookish man, how much would a Western audience accept it?

It seems clear that regardless of what Disney and Hollywood think, it’s long past time to redefine what feminine means. Unfeminine doesn’t have to equal “unattractive” or “unworthy”, and, in fact, being “attractive” can and should be about more than just physical looks or one sole inherent virtue. Brienne’s actress, Gwendoline Christie, gave an excellent quote to Rolling Stone on this exact topic:

Rolling Stone: An additional wrinkle for Brienne is that she’s pretty much universally seen as ugly. When you’re made up to look that way, when you change your hair and your demeanor and your physicality to look that way, does it change how you feel?

Gwendoline Christie: Yeah, totally. As a woman, we all want to feel attractive […] But you have to step outside of that and think about what these things really mean. I am still a person with a sense of superficiality that I’m trying to challenge. I hope that it makes us examine exactly what “unattractive” is. Perhaps it’s not the conventions that we have or the blueprint in our minds. And if it makes people question for a minute what unattractive is, and the way in which we may respond as people to what we think unattractive is, then it’s worthwhile.

Women who don’t fit Disney’s feminine mold are an important step forward, and we need more of them. Using these women as examples, we can slowly change the definition of feminine from a set of highly unrealistic expectations to something that an intersectional female community can understand. Girls should learn that they are not meant to spend their lives reaching for someone else’s idea of femininity; they are meant to come to their own terms with their gender expression. There is no right way to be feminine.

5 thoughts on “Sexualized Saturdays: Fear of the “Unfeminine””