The trope of the siren seductress is probably one of my least favorite things. A story involving this trope usually goes something like this: evil woman with otherworldly powers seduces good man (or men); man does her evil bidding against his will; good women are betrayed and jealous but have to save the day anyway. It’s sexist: it promotes the idea that female sexuality is an evil thing; it’s heteronormative: it assumes that men are only attracted to women, and women are only attracted to men; and it’s insulting to both men and women: it boils them down to base sexual interactions and stupidity.

Imagine my chagrin when I tuned in to watch Lady Sif guest star on Agents of S.H.I.E.L.D. and discovered that the plot was the most boring and predictable iteration of this trope. 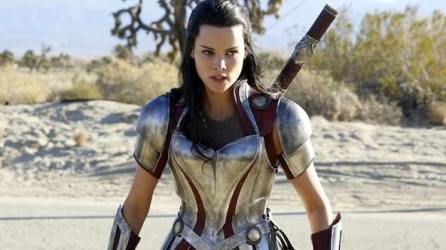 Trigger warning for discussion of rape beneath the cut.

In the episode, an Asgardian villainess named Lorelei comes to Earth and takes a bunch of dudes, including Agent Ward, captive using her feminine wiles. Sif has been dispatched by Asgard to bring her back, and she teams up with Skye, May, and Simmons to rescue Ward and save the day.

The episode, punnily titled “Yes Men”, casually ticks off every nasty aspect of the trope without breaking a sweat. Lorelei is evil and sexy and uses her sexuality for evil, and to exacerbate this demonization of female sexuality, her enemy and rival is Sif, an out-of-touch-with-her-emotions brawler who, though physically attractive, is never portrayed as sexual. Despite the fact that it’s twenty-fucking-fourteen and I’m pretty sure the Marvel writing staff is aware that queer people exist, the heterosexism was strong with “Yes Men”—not only did the episode never acknowledge that people other than men could be attracted to women, it also suggested that the more hypermasculine a man was, the more likely it was he would be entrapped by Lorelei.

Agent Ward is, of course, the first of the S.H.I.E.L.D. crew to fall prey, and becomes Lorelei’s lieutenant throughout the episode. They also have sex, and it’s filmed in a steamy way that doesn’t ever acknowledge that it’s nonconsensual. Ward has effectively been roofied with Asgardian date-rape drugs, and can’t possibly give consent. To add insult to injury, the women are shown as being jealous of Lorelei—she got to sleep with Ward and they didn’t—and are resentful toward Ward—he betrayed them by putting his dick in someone else, even though it occurred during what was in no uncertain terms a rape.

The episode is symptomatic of everything that’s wrong with the MCU in terms of representation and forward-thinking, especially since Lorelei has appeared in a far less awful way in the Loki: Agent of Asgard comic recently. This makes it pretty evident that it should not be that complicated to subvert. (In fact, The Mary Sue’s Susana Polo offered an alternate plot for “Yes Men” in her review that would have made it one of my favorite episodes so far rather than a piece of sexist trash.)

Non-sexist siren plots have been done, and well. And to add more egg to what’s cooking on Marvel’s face, I should point out that my example of successful subversion is over forty years old.

The Star Trek: The Animated Series episode “The Lorelei Signal” is set on a planet where the energy fields affected its colonists such that the women were only able to survive by absorbing life energy from the men. These women have been forced for hundreds of years to lure strangers to their planet so they can sap their life forces and remain alive. When the Enterprise picks up the ladies’ signal, Kirk heads there immediately—even though Uhura cannot for the life of her figure out why the men feel drawn to that planet. 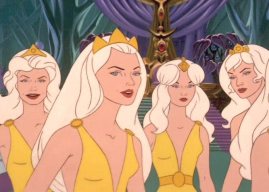 When Kirk and his (all-male) away team are kidnapped and imprisoned by the women of the planet, Uhura ably assumes control of the Enterprise, teaming up with Nurse Chapel to assemble a female away team and save the day. They destroy the technology the women were using to control people, and promise to send a ship back to help them relocate to a safer planet.

The biggest problem with the siren trope is that it’s reductive. Basically, it reduces men down to their junk, and women down to their power (or lack of power) to titillate said junk. “The Lorelei Signal” does neither. Kirk’s team, despite having been captured by the female colonists, are not the willing slaves of the women throughout their tenure on the planet; rather, they realize what’s going on and escape their clutches, hiding to await rescue in the garden. Meanwhile, the women of the planet are not two-dimensionally evil vixens; rather, they are forced to ensnare men to survive. They don’t like doing it, and they are eager to leave their planet and its draining effect as soon as possible when the Enterprise offers relocation.

My least favorite part of the siren trope is the aforementioned rivalry between the good and evil women. The women resent the men for behaving romantically toward someone who isn’t them, and they resent the women for stealing their love interests. This behavior undermines the fact that the men are victims of mind control and often sexual assault during these situations, and also sets the women up in a Madonna/whore dichotomy where the women who act sexually are the bad guys.

However, in The Animated Series, there are no canonical romantic tensions between characters, and Uhura’s team never falls into the trap of blaming the men for being attacked; rather, they see them as victims who need to be saved. When the women of the planet reveal the reason for their actions, Uhura and her crew realize that these women are also victims, and treat them with compassion as well. And while the women who inhabit the planet are all paragons of beauty, their methods for sapping life force do not involve the romantically-painted sexual assault that was featured in the S.H.I.E.L.D. episode; instead, they use mechanical means. There’s not even a dubiously consensual kiss, which is more than I can say for other Star Trek stories (I’m looking at you, “Plato’s Stepchildren”).

There’s nothing wrong with using the siren trope as a basis for your story, but doing so without making an effort to avoid the sexism historically associated with it is lazy and harmful. It’s totally, absolutely, 100% possible to write this story in a way that doesn’t suck, so it’s too bad that Agents of S.H.I.E.L.D. took the most awful available route in adapting it for TV.

I’m still mad that this of all episodes was the one that Sif guest-starred in.

9 thoughts on “Sexualized Saturdays: Sirens and the Men Who (Are Forced To) Love Them”