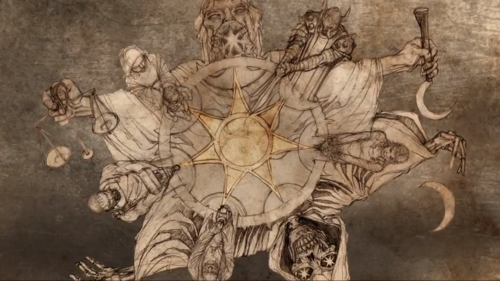 Innovative worldbuilding is the true backbone of all fiction which is celebrated by geek culture. Our most beloved authors, artists, and filmmakers create worlds in which we can imagine ourselves. There are plenty of things storytellers do to make a world convincing: use science or magic to explain (or enhance) strangeness, compose detailed descriptions of food or foreign landscapes, or even base it on our own. When most storytellers create worlds, unfortunately, they usually do a poor job of including any kind of religion. It’s either ignored altogether, or inserted via boring stereotypes. That’s a pity, because religion can be one of the most powerful tools in a writer’s arsenal to tie together a peoples’ culture, history, and motivations. One author that does a great job of exploring this is George R. R. Martin in his A Song of Ice and Fire series, adapted into HBO’s Game of Thrones.

One of the many promotional videos for Season 2 of Game of Thrones was an interview with author George R. R. Martin about how and why he created such a diverse pantheon of gods and religions for his fictional universe.

Martin explains that he felt religion was an enormously important part of making his world believable. The Middle Ages were his model, and religion (and war in the name of religion) is a huge part of that era. But Martin takes this to the next level. It’s not like there’s just one religion in Westeros, or just one really complicated religion (with lots of gods and priests and ceremonies and beliefs). There is a variety of religious representation within Martin’s fictional world. Some worship the Old Gods, others adhere to the Faith of the Seven, or some other religion entirely. Some, like the followers of the Lord of Light, are primarily motivated by their fervent faith, while other characters couldn’t care less about honoring any god. Martin gives us a great example of how to do religion right when it comes to worldbuilding and storytelling. 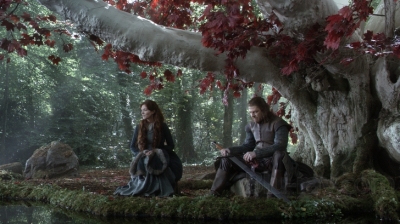 The original religion of Westeros honored the Old Gods. This pseudo-pantheistic faith of nature worship was first practiced by the magical druid-like non-humans that populated the continent over 10,000 years ago. It was also practiced by the First Men, the first human inhabitants of Westeros. Worship centered around a holy forest called a godswood, with a sacred weirwood tree. The weirwood is a white tree with red leaves and red sap, with a face carved into it. When the tree is cut, the sap makes it appear to be bleeding, and it is commonly believed that the Old Gods exercise their power in whichever direction the face points. At the time the story takes place, it is only practiced in the North by the descendants of the First Men and by people living Beyond the Wall. Basically, if it’s really cold, you’re likely in a place where the Old Gods are worshipped. Most of the forests were cut down in the southern part of the continent, weakening the powers of the Old Gods as the religion known as the Faith of the Seven took root.

The Faith of the Seven is the most popular religion in Westeros. It is loosely based on the Catholic Church, with lots of clergy (both male and female), religious orders, ceremonies, and political influence. The Seven refers to seven “faces” of one god, a bit like the Christian belief in the Trinity. There are three male faces (Father, Warrior, Smith), three female faces (Mother, Maiden, Crone), and one genderless face (the Stranger). Most of the people of Westeros seem to honor the Faith (also known as the “New Gods”), though it’s unclear how strong that faith is. It seems to be more a part of upholding the cultural status quo. Furthermore, the six gendered manifestations of the god embody some gender tropes, so while there seems to be fairly balanced gender representation in the Faith of the Seven, that representation is geared toward stereotypes.

Over on the eastern continent of Essos most people worship R’hllor, aka the Lord of Light. These people believe in a single, all-powerful god struggling against the opposing Great Other deity. Most of their rituals involve fire, up to and including burning people at the stake. It’s a very intense, evangelically driven belief system. Martin explains in the above video that he loosely based it on Zoroastrianism. While some people may get away with honoring both the Old Gods and the New, the followers of the Lord of Light are hostile to any other religion. Melisandre, a red priestess of the Lord of Light, exerts considerable influence over Stannis Baratheon and engages in all kinds of rituals to aid him in establishing his claim on the throne of Westeros. 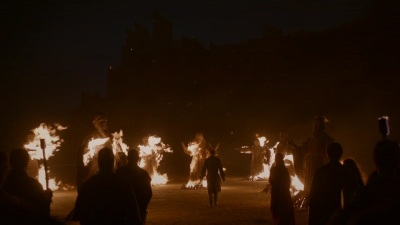 Setting people on fire is a great way to show you mean business.

Still others practice other religions that reflect local practices and culture. The secretive guild of assassins known as the Faceless Men honor the God of Death, also known as the Many-Faced God. The Dothraki, a warrior nomad people who prize horses, praise the Great Stallion. The Drowned God is an important part of the culture of worship the Iron Islands. Their belief system justifies their code of piracy and pillaging, and followers do not fear dying at sea. When Theon Greyjoy returns home, he is re-baptized in the name of the Drowned God in order to prove his loyalty to his family.

What I find most interesting about the religions of Westeros is how Martin makes ambiguous which one is “right”. Religion often “proves” itself to potential believers through prophecy or miracles. Miracles are really just another form of magic, and Westeros is full of magic. Because Martin has incorporated magic not only into the world of Westeros, but also into its religions, there’s “proof” for competing religions. Melisandre creates a freaky shadow-baby-demon-thing by getting pregnant by Stannis and using his life force. She’s clearly tapping into some kind of supernatural power, and it seems like every other word out of her mouth is about the Lord of Light. We’re left to wonder if said Lord really is supplying her mana. And while there is little formal connection between worship of the Old Gods and the ability to skinchange (to enter the mind of an animal, known as “warging” with wolves), it’s hard to draw a conclusion given a skinchanger’s connection with weirwoods. There’s got to be something at work there. And we’re getting more and more proof that the mysterious White Walker monsters from Beyond the Wall are not only real, but venturing south. 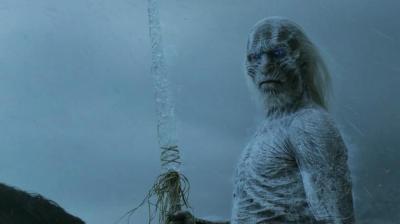 Because it’s so hard for me as a reader to identify which religion seems to be the one that is most powerful, Martin is keeping me guessing about what the future of Westeros holds. Is the Lord of Light really supplying Melisandre’s power, and will it be enough to put Stannis on the throne? Will the Old Gods protect the descendants of the First Men in the North, or will they favor the White Walkers? What I do know is that religion gives Martin one more tool as a storyteller to explore the many conflicting motivations of our pantheon of characters. By linking religion with magic and actual power, Martin can use it as one more horse in his team to drive the plot forward. Creating a religion for even the smaller cultures in his world is an easy way to make them feel more real, which makes the fictional universe richer. When it comes to worldbuilding, I often see authors simply ignore religion as an element of a peoples’ culture, or manhandle it so badly that it feels like a pointless stereotype. The sheer variety and detail Martin puts into the religions of Westeros (and beyond) are a model for how it should be done.