Online role playing, as a writing form, has seriously come into its own in the past decade. I remember hopping online back when everyone was congregating in AOL chatrooms and, unsurprisingly, most of the role playing I saw going on there was either animal role playing or cybering (typing out sexual acts, one of the most noted forms of role playing). These days, we’re a long way away from those chatrooms—role playing can be found anywhere with a text-based posting system and with as much diversity as all 500 or so cable channels. Especially in my life, role playing has taken a huge role in shaping my writing style as well as who I am as a person; I’ve improved in character building, I met my girlfriend and a wide majority of my friends through role playing, and I even offer to help others in building their own characters. I also help run a role playing site, so my co-admin and I experience the good as well as the bad of the community. And let me tell you, when role playing gets bad, it’s really bad.

Only 90’s kids will remember.

If one were to ask what the worst part of role playing is, or rather, what’s the worst thing to run into, I’m sure that a solid eight times out of ten, people would mention something about Mary Sues in all their overpowered glory. However, this would be incorrect. First of all, Mary Sues are fantastic and should be protected at all costs. That aside, one of the largest problems to plague the role playing community, at least from a forum-based standpoint, is the manner in which male characters are held in higher respect than female characters.

Before I go any further into this, I will say that I attempted to look for some honest-to-god statistics for gender diaspora in forum-based role playing sites. Unfortunately, unless I was willing to compile my own study, the best I found was something about MMOs, which is not what I’m talking about in the least. It is possible to role play in MMOs (thus the name “massively multiplayer online role playing game”), but what I’m writing about now takes a look at the role playing community outside of the gaming community—the role players that stick to user-run forums. As such, this post is entirely comprised of personal experiences and observations. And it should go without saying, but of course these observations aren’t true for every role playing site out there. However, I have seen them happen often enough for them to stick out in my mind.

Role Playing: not quite so balanced

Admittedly, there is a need for male characters on role playing sites. It’s abnormally easy for any given site to be overrun by female characters. I say abnormally because this surge of female presence is so different from any other form of media, from fanfiction to network-based television shows. I can’t say for certain, and I especially can’t speak for everyone, but I feel like the reason this may be is because it’s a safe space for girls and women to live out their own fantasies. Role playing doesn’t have to follow the rules of a predetermined canon—unless you’re playing on a site using a television show for a setting or something—so as long as you’re willing to look, you can find a site that will fit any premise your heart desires. Rather than working off the interests of some focus group, role playing is inherently for the pleasure of the person role playing. Thus, it’s one of the mediums where women can truly feel comfortable expressing themselves through a character that reflects them more closely than, say, Daenerys Targaryen.

Wanting a balance in characters on a specific site isn’t inappropriate. However, when someone applies with a male character, people tend to react like it’s the second coming of Jesus. Immediately these male characters get inundated with new ideas for plots and it’s not uncommon for other members to congratulate the creator for being brave enough, I suppose, to add a male to the cast. If it happens to be the case that role playing is a mainly woman-driven art form, then this is problematic. Being excited over a male character is not the issue, but in treating male characters as if they’re something overtly special, the female characters get shoved aside and made to appear less than what they’re worth.

In fact, female characters are discriminated against on many role playing sites. Often, they’re banned outright. This practice is to promote equality across the genders so that a ‘verse with a disproportionate amount of one gender doesn’t occur. However, bans on male characters rarely happen, and said bans of female characters tend to happen prematurely. Again, wanting to keep things equal isn’t bad in and of itself, but there’s a clear discrepancy in the role playing community when female characters have so much working against them. Then again, these bans aren’t usually enacted for reasons of maintaining equilibrium; the most common reason is for shipping. Heterosexual shipping. I’ll admit that it does kind of suck when there are few to no shipping options for a character, but this reeks of heteronormativity and a smidgen of homophobia. As user Rhi-Rhi from the RP resource site CAUTION questions,

I have to wonder why that is–are male characters inherently viewed as more valuable, because of our messed up society, and players have internalized that? Are people just more willing to write mxm pairings so they don’t see an overabundance of male characters as a big deal, since they can still get their romance on? (Meanwhile, I notice that very, very few people are willing to play fxf pairings, sigh.) Because yeah, when there are bans on female characters, people CLAIM it’s to “make things equal” but I always, always read it as code for, “We want het romance.” 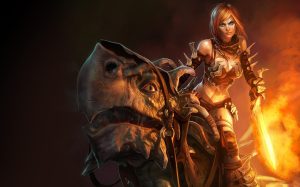 Original character, do not steal

These issues—though they’re not close to all of them, I assure you—again show a marginalization within user-based content. Although on this site we’ve discussed other user-content mediums with differences in how female and male characters are portrayed, I can’t help but feel role playing is a little bit different in terms of the reasons behind why these problems occur. In fanfiction, as this article states, there’s a general desire to separate the self, the author, from the events happening within in the fic, for various reasons. However, role playing is, in some ways, wish fulfillment—we will never be a powerful dragon rider who controls a sweet fire sword and is also the ruler of a small group of assassins, but damn, that would be cool. Even in the most mundane of settings, role playing allows its users to experience things they never would have experienced themselves, for better or worse, without leaving the safety of their home. We make characters that reflect parts of ourselves and our desires and see how they play out amongst others’ selves and desires.

Yet that makes these issues especially problematic given the perceived demographic. The hobby of role playing is an idealized reflection of the world in which we live or ones in which we wish we lived. Even if that world is inherently problematic, the fact that people choose to play in it reveals that there’s something about that place the player enjoys. But when these idealized worlds hold onto rules and opinions, outside of the in-game world’s morals and cultural norms, that marginalize the female voices already marginalized everywhere else, there’s clearly a larger issue. The role playing community is another unfortunate example of how internalized misogyny runs rampant in all forms of fiction. It speaks volumes that even in an idealized environment, we as a community are still clamoring for more men rather than for more women; we value the impact male characters have more than the input from female characters. Given the popularity of role play situations where women (characters) have very little say in what happens to them—like forced marriage role plays, or canon role plays where women are typically seen as inferior to men—like Dragonriders of Pern—we get a very stark picture of how perhaps it’s even harder in fictional worlds to escape these oppressive ideas of the real world.

These problems won’t go away any time soon, but they are being challenged. More sites are cracking down on this kind of behavior and challenging their userbase to fight against the discriminatory mindset most of us have been brought up with; not only in terms of men and women, but also in terms of racial diversity and breaking through the gender binary. Sites like the previously mentioned CAUTION hold discussions about why trends in the role playing community still exist and what impact they have on the userbase. Additionally, Tumblrs such as All Things Roleplay allow moderators of role playing sites and members alike to anonymously complain about things in the community that bug them, as well as bring to light things they wish they could see more of. With more people on the internet becoming aware of problematic behavior in our culture that is in turn reflected in our fiction, I hope that one day these problems will become a thing of the past.