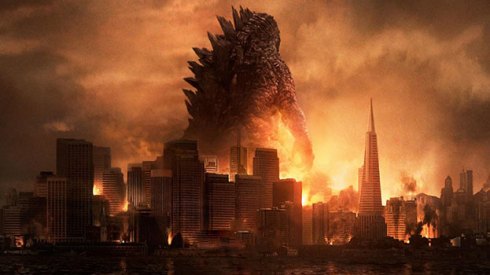 Right now, I think my favorite thing about this movie is that it ended up being only about two hours long. And thank God for that. The characters are bland, unmemorable, and mostly white cardboard cutouts, and the plot isn’t any more engaging than “monster vs. monster”. Of course, I may not have found the story particularly engaging since I couldn’t hear half of it.

My theater actually forgot to turn the sound up to a volume loud enough for the audience to understand what any of the characters were saying. When the mistake was finally rectified, the movie was about halfway done, and Godzilla had just appeared. That said, I cannot say that I’m particularly upset by my inability to hear the characters. The first half of the movie appeared to be nothing more than a setup of poorly written characterization and annoying tropes that I have seen in every other movie I’ve ever watched.

Our movie begins in Japan with our obligatory middle class white family, because as Lady Geek Girl pointed out a while back, what we totally need is more white people in films, especially when said film should be about the Japanese. This family consists of a married couple and their son, who is going to grow up to be our cisgender heterosexual protagonist. From here on, I’m going to call him CHP—I didn’t catch his name due to the aforementioned sound problem, but it’s not like he was that great or memorable of a character anyway. Both his parents work in a nuclear power plant, and there’s been some odd seismic activity recently. Typically, his dad’s a workaholic who doesn’t have time for him, and his mother’s a wonderful person, so she gets fridged within the first ten minutes of the movie. 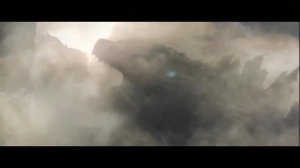 Fifteen years later, CHP has moved to America and has a son and wife of his own, while his father, who still lives in Japan, has become even more neurotic as he tries to figure out the circumstances behind his wife’s death. After he is arrested for trespassing in a quarantined area, CHP must fly back to Japan to bail his father out. The two of them have a heart-to-heart conversation that I couldn’t hear, before they both go back to the quarantined area and get arrested together. Some shenanigans ensue and then monsters appear and start causing chaos. Neurotic father figure dies tragically. CHP mourns him for half a scene before moving on.

From there, the movie is just a fairly typical monster movie. That’s also about when the sound got fixed—so everything was really quiet until Godzilla showed up and started roaring. It. Was. Awesome.

I’m not sure how I feel about this movie. If I could, I would totally go back and rewatch it. In fact, I might do that after I’m done writing this. The action scenes and effects were great, and as someone who was only interested in watching Godzilla fight things, the movie delivered perfectly—though sadly not until after about an hour into the film, since Godzilla is suspiciously absent for the majority of the movie, even though it’s called Godzilla. Sure, I wasn’t happy that CHP’s mom got fridged, nor was I too impressed that the movie ended up being about white people—because when I go to see a movie that starts in Japan and is about a Japanese monster, what I really want to see is more white people. And not only did it star a white person, that character was still a cishet guy, because I guess we don’t get enough of them. 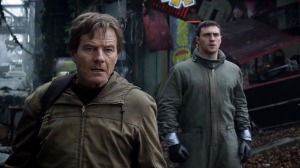 White people. The only people who matter enough to be main characters.

But what I really loved about this film is that it tried to stay true to the original intent behind the original Gozilla movies. Godzilla was conceived as a metaphor for the atomic bombs, and that is something that this movie doesn’t shy away from. It makes a point to establish a connection between Godzilla and nuclear radiation, while also reminding the audience of the tragedies that happened during WWII. That’s more than I can say for the last Godzilla movie I saw.

I do recommend this movie, but only if you really want to see Godzilla fighting things. I think the film tried to stay as true to the original franchise as it could, but it is still an Americanized version about white people—seriously, were there no Asian actors available?—and that sadly does take away from the original metaphor behind Godzilla. While it is nice that the movie attempts to connect Godzilla to the destruction and horror Japan suffered, it is significantly problematic and offensive that the movie ended up being about white Americans, when Japan is the only country to have survived such catastrophe. This movie could have been so much better. But in the end, if you’re only there for Godzilla, it is an enjoyable experience. (Except for that whole sound issue. But that was just my theater.)