When I started watching Orphan Black just about a month ago, I already knew that one of the clones, Cosima, was going to be queer, and I was excited to watch her story unfold. Unfortunately, there was nary even a hint of what could have been a very interesting nature vs. nurture discussion. Just as upsetting, I was treated to this outstanding line from Delphine, her new paramour: “I’ve never done this before.” Cringe/eyeroll/facepalm/etc. “I’ve never done this before” is not good queer narrative writing; it’s a line from the beginning of a porno. Let’s examine why it’s problematic for that to be the only queer narrative seen on TV. 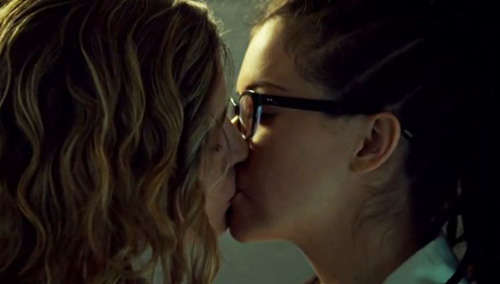 That smile just screams, “There are NO ULTERIOR MOTIVES here, trust me!” (x)

The way the Cosima/Delphine storyline played out is absolutely not the only way it could have gone. Why couldn’t Delphine have been a lesbian? She’s French, blonde, a biologist; being a lesbian would’ve just been one more characteristic. It would’ve made the romantic aspect of their storyline go much more smoothly; they have enough to worry about what with Delphine being her monitor and Cosima dying of a mystery ailment and tackling the clone mystery from the science angle. Frankly, it would have made more sense if Delphine was actually a lesbian (or openly bi woman), as apparently the monitors are set in place to get really close to their charges (they are/were all in relationships with the clones), and surely Dyad would have known about Cosima’s orientation. The way it played out, it felt super shady having Delphine “go gay” in what seemed to basically just be an attempt to get closer to Cosima. Was she sleeping with Cosima only to get the information she wanted? To make it more genuine, “I’ve never done this before” could have so easily be substituted for anything from “I do this all the time! Yay lady-loving!” to “I haven’t done this in a while because lately I have been dating a man, but that one relationship does not define my sexuality!” 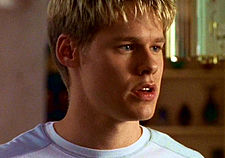 I find it interesting that this is more common to female queer story arcs: I recently got Netflix and finally started binge-watching those seminal, ground-breaking queer TV shows, The L Word and Queer as Folk (I need to be able to pass a test on these shows to apply for the Homosexual: Level II certification). Among many other storylines, both shows begin their first seasons with a character newly entering into the LGBTQ+ community: the doe-eyed Jenny in The L Word and the prototypical twink Justin in Queer as Folk. But there is a huge difference between these two newbies. In the first episode, Justin loses his v-card to a dude he met at a club, but there were no ands, ifs, or buts (just some butts) about it—he wanted some gay sex. He is only seventeen, but he was not at all seduced by the man more than ten years his senior; on the contrary, he is very confident in what he wants. 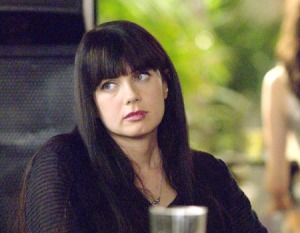 That’s why her bangs are so big; they’re full of secrets!

Jenny, on the other hand, came onto the scene as ostensibly straight, with a long-term boyfriend. Her introduction into same-sex hanky-panky is very much in the “I’ve never done this before” camp. No mention about previously finding girls attractive—those glamorous L.A. lesbians are just powerful enough to turn anybody, apparently! Very interesting how these two shows chose to take such different approaches to portraying male and female queerhood; while it is a commonly-held belief by the general public that female sexuality is somehow more fluid than male sexuality, the veracity of this claim is debatable. 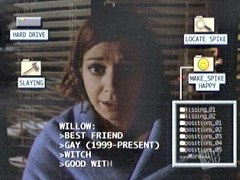 This article, of course, wouldn’t be complete without mentioning probably the most famous gay TV couple of all time, Buffy the Vampire Slayer’s Willow and Tara. Willow was in a very serious, loving, presumably physical/sexual relationship with a man, Oz, and previously her attraction and love of her childhood friend Xander was always an important plot point (in fact, it continued to be a plot point even during her relationship with Oz). Then she goes off to college and meets and falls in love with a woman, Tara. While the two never have a “I’ve never done this before” dialogue moment, when Willow tries to explain herself to Buffy, she basically does a variant on that famous line, saying it wasn’t something she was planning on or looking for, practically saying she is in love with Tara in spite of her being a woman. Her tune changes within the next few seasons, and she is written as totally gay, without any addressing of her previous involvement with men. Never once does she say, “I like men and women equally!” or “I think pansexual might be the best way to describe myself!” or even “That thing with men was all a show because I was in denial and not comfortable with my homosexuality!” 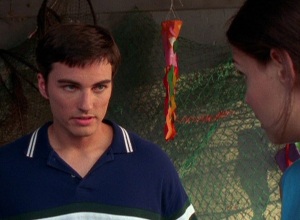 Jack was probably helped out by being on a show created by an openly gay screenwriter.

As a counterpoint, I bring up my old gay TV hero, Jack McPhee. Jack has previously dated a girl prior to his first appearance on the show, and begins dating a girl in his first season on Dawson’s Creek. However, when he comes out later in the season, it is not because some man has converted him over; it is him acknowledging a truth that he can no longer deny, and here’s an important point: he actually talks about his feelings surrounding his sexuality. He talks about always knowing he was different, even if he couldn’t put a name to this difference. He talks about feeling the need to suppress feelings that could bring disdain and dishonor from society, and more importantly, his family. In my opinion, this dialogue about the quiet, almost unconscious self-knowledge of being different and the ongoing struggle to be as “normal” as possible while growing up resonates so well with most queer narratives I have heard from people in real life. Much more so than, ”Man, that bartender is hot! I think I’m gonna go gay for her!”

Now, this isn’t to say that nobody finds their story accurately reflected in a “I’ve never done this before” storyline. It’s obviously impossible to speak for every single person about their journey on the sexuality spectrum. But I think it’s important for “I’ve never done this before” to not be the only queer narrative we see on TV. It’s all about clarification and taking five minutes out of one episode in a whole season to have a character discuss their thoughts and feelings a little more, a point I brought up once before while mentioning the ambiguous sexuality of Stiles on Teen Wolf. Throughout this post, I provided a number of alternative lines to “I’ve never done this before”; I look forward to the day when I hear one of them or something similar from a TV character.

8 thoughts on “Sexualized Saturdays: “I’ve Never Done This Before””