We’ve discussed before on this blog how few and far between characters of faith are in pop culture. When they do crop up, it is often of the extremist/terrorist/serial killer variety. The only other time it seems to come up is as the butt of a joke—literally. Far too often, religion is only brought up in a comedic line to get some laughs. Religion, how do we mock you? Let me count the ways.

Willow Rosenberg, Jewish on Hanukkah, Pesach, and whenever it’s convenient for a joke. 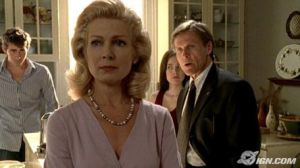 There’s a magical, wonderful show I love called Wonderfalls, from the well-known geek creator Bryan Fuller. In it, the main family is revealed to be Presbyterian, for the sole purpose of having them make some slightly bigoted lines about Catholics for comedic effect during an episode about a runaway nun. When they think their daughter Jaye is seeking counsel from the nun, they tell her: “Catholics aren’t bad people, they just do things differently. Catholic prayer has to go through saints and apostles and statues; Presbyterian prayer goes straight to the source, right to J.C.!” The idea is to shake one’s head and chuckle at Jaye’s parents’ misconceptions, but the fact of the matter is, her family never engages with the Catholic characters to try to understand them any better. Learning opportunity missed.

Buffy the Vampire Slayer was also guilty of this. I think almost every time Willow’s Judaism was brought up was for a one-liner. When Xander said he wanted to make sure the egg he was caring for as part of a home ec project was raised with good Christian values, Willow said she was gonna raise hers with good Jewish values. Not because of Willow’s undying devotion to Torah and Talmud, but because it made for a quick laugh. In another episode when bearing gifts for her friends, Willow says, “I feel just like Santa Claus, except thinner and younger, and female, and, well, Jewish.” LOL!

This is a true statement, y u guyz laughing?—(x)

In the second season of the TV show Roswell, the character Kyle Valenti discovers Buddhism and begins to integrate it in his life. Well, every now and then he’ll talk about meditating to find his calm center or begin with “The Buddha says…” I’m not sure if there’s supposed to be something inherently funny about a white suburban high school jock trying to take on an ancient Eastern philosophy, but the other characters never take him seriously, despite the fact that he seems quite genuine in trying to study Buddhism. Perhaps it’s just the idea of any teen thinking they are a paragon of wisdom, but I feel like he would not have been taken seriously no matter what philosophy or religion he was studying.

Many times, it’s just a small aspect of the character that is brought up every now and then. In the movie Easy A, however, Amanda Bynes’s “Jesus freak” character is played entirely for laughs. It’s a much more integral part to her identity than Willow’s Judaism, so it’s brought up more often. But every time she says something religious, she’s presented as dumb or silly for saying such a thing. Her faith is judgmental and critical, but it also seems pretty genuine. No one says, “I don’t agree with your narrow-minded views, but I can at least respect you for standing up for what you believe in.” Rather, she is merely portrayed to the audience as one big joke.

These are just a few examples that stood out to me in somewhat recent pop culture. I would like to present to you a counter-example, where someone’s faith doesn’t completely define them, doesn’t make them a violent extremist, and isn’t used to crack a joke. I’d like to, but I can’t think of any! Just once, can’t a character say, “Brb, going to church!” and can’t their friends just be like, “Ok, cool, we’ll see you after” with no quips or judgment? It’s disheartening that faith seems to only make characters villains or laughingstocks.

6 thoughts on “Oh, My Pop Culture Religion: Religion is Not a Joke”