Well, Monday has come and gone again, and with it another episode of Teen Wolf. This week, Kate is a creep, Peter gets robbed, Derek is de-aged, and Papa Stilinski is worried about time machines. Hit the jump to find out my thoughts.

We last left off with the gang finding a de-aged Derek down in Mexico. They bring him back to Beacon Hills so Deaton can take a look at him and hopefully tell them what the hell is going on. Unfortunately, Deaton has no damn idea. And though Scott and the gang wonder how they’re going to handle a de-aged Derek, at no point does anyone ever wonder how Kate even managed to do this to him in the first place.

As our group later finds out, not only is Derek younger physically, he’s also younger mentally, meaning that he doesn’t remember any of the things that happened in the past so many years, such as the fire that killed his family or even how to control himself on a full moon. Essentially, Kate turned Derek back to an age when he still trusted her. She waits until Derek is alone, and then, using his naivety to her advantage, she tricks him into taking her to his family’s vault where they have a triskelion hidden. She plans to use it in order to help control her own transformations.

Our gang heads to the high school—since that’s where the vault is hidden, because why not?—in order to stop Kate with the help of Peter. On the way, they are confronted by the monsters that attacked them back in Mexico last episode, and we learn from Peter that these are Berserkers, which in Norse mythology, are people possessed by animals. Berserkers were briefly mentioned by Chris Argent last season, and according to him, they are people who have lost all their humanity.

While the gang fights the Berserkers, Peter heads off to confront Kate. Hearing the battle, Derek leaves Peter and Kate to hopefully kill each other off go help Scott and the others, who aren’t faring so well. Even though Scott’s an Alpha, backed up by a were-coyote and a katana-wielding kitsune, he doesn’t stand a chance against the Berserkers, yet somehow, some way, Derek, a beta, does. I don’t get it either. Even more confusing, during the fight with the Berserkers, Derek reverts back to his older self for some reason. And now his eyes are yellow. 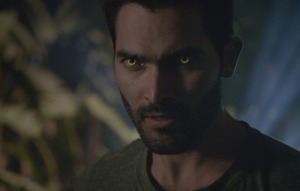 Back in the vault, before Peter and Kate can rip each others’ throats out again, someone attacks them with smoke bombs. Whoever it is steals a suitcase from the vault, and when the smoke clears Kate is also gone. Peter, freaking out over the lost case, reveals that it contained 117 million dollars. That sucks so much.

All in all, this was both a fun and a creepy episode. It was also one that made very little sense. Rather, I didn’t really see the point of de-aging Derek only to retcon that one episode later. Like Lady Geek Girl, the whole de-aging thing feels very bad fanfic-y to me. That said, it is an idea I enjoy if done well. And I especially enjoy it in Derek’s case since I’m not the biggest fan of his character. However, it would certainly be interesting to continue watching a younger Derek struggle in the modern day, since from his perspective he would have essentially been brought ten years into the future. How would this Derek’s storyline have been different from what happened to him previously? For starters, how would it change Derek’s character to have a group of friends willing to support him after discovering that almost his entire family is dead?

But no, Derek for some inexplicable reason is cured by the episode’s end, making me wonder what the point of de-aging him in the first place was.

On that note, this episode certainly highlighted what a creep Kate Argent truly is. No one is ever going to convince me that she isn’t a sexual predator—she actually makes out with a fifteen-year-old Derek this episode—and I really hope the show will not redeem her character and instead continue to use her to highlight just how awful sexual abuse truly is. This is not an issue that the show has been particularly good at handling—almost all of Lydia’s storylines are giant rape analogies—but I’m going to give Teen Wolf the benefit of the doubt for now.

Overall, I was fairly happy with this episode, and I especially like that Teen Wolf is also doing a better job handling Malia’s character and the social challenges she’s going to face. As she spent eight formative years as a coyote, it should come as no surprise that she struggles in a high school classroom setting and lacks what is considered common knowledge, such as who wrote the Gettysburg Address. Unfortunately, the show uses this for a comedic effect, and the scene in question doesn’t really explore her struggles all that much. We also get to see her meet Peter this episode, something that Scott is very apprehensive about, all things considered.

Peter, knowing that Malia is his daughter, is immediately charmed by her and asks her if she got her eyes from her mother. Malia, thankfully, doesn’t take kindly to his question, which probably sounded really creepy from her perspective. And I loved her quip to Peter, who, after finding out that Kate’s still alive, gets upset that no one in Beacon Hills ever stays dead. Malia tells him, “I think they were hoping you would stay dead”. I’m also looking forward to seeing more of her relationship with Stiles in the future and what happens with that, since I’m quite certain at this point in time, she considers him her mate. Stiles even tells Scott that she’s taken to sleeping in his bed now, though I think it’s just platonic cuddling for the moment. Since Malia spent eight years as a coyote, she’s probably really mature in some regards (taking care of herself) and childlike in others (selfishly leaving friends behind) which entirely makes sense for her character. So when it comes to Stiles, given the events in “Echo House”, it doesn’t surprise me that she thinks of him as her “mate”. At the same time, however, I don’t think she understands the concept of dating, and I really wish the show would address her mental state more in depth before furthering this relationship.

I guess we’ll have to wait until next week to learn more. Until then.