I’m not sure where to even begin in order to explain this movie’s plot, because as the movie wore on, it just got so convoluted. Age of Extinction had numerous plot threads all loosely tied into each other. The amount of storylines the film had to focus on made it difficult to follow. Screen time had to be split for each plot, and that took away from each of them. 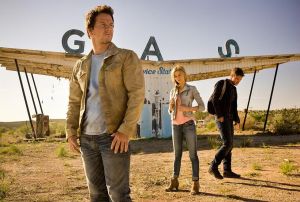 For starters, we have our main character, our generic, down-on-his-luck, cishet, ostensibly white protagonist—hereupon dubbed CHP—who’s trying to make ends meet so he can send his teenage daughter off to college. He eventually comes across a beat-up Optimus Prime in truck form, and unaware that it’s an Autobot, he plans to sell it for parts. However, once he realizes what it is, he instead fixes up Optimus Prime, making Optimus indebted to him.

Meanwhile, the Autobots who helped defend the Earth from the alien invasion in the last movie are being hunted down because humanity hates aliens now, I guess, by both the American government and other Transformers from outer space. Once captured, these Autobots are killed and given to a tech company for experimentation.

The company in question believes that it’s been given Decepticon bodies and readily strips the carcasses for materials so they can make their own Transformers. Also in their possession is Megatron’s head. Unbeknownst to them, Megatron is still alive because why won’t this fucking bastard die already and has been uploading his consciousness into the new Transformers, giving him both a new body and a new army. Also, his new body is much more powerful than the older one. 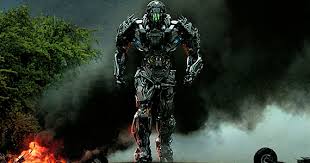 Additionally, the robots from outer space have come to Earth looking for Optimus Prime. They mention that the “Makers”—the people who originally built the Transformers and who until this point in time have never been mentioned—want their product back. As such, they have struck a deal with the humans, and in exchange for Optimus Prime, they’ll give the tech company something called a “Seed”.

The Seed is actually a bomb that will create a special metal the tech company can then use to build more Transformers. As Megatron has taken over the company’s current Transformers, he plans to steal the Seed, detonate it over the largest city he can find, and then take over the Earth, because he’s evil.

CHP and his daughter are caught up in all this by helping Optimus Prime, and end up being fugitives on the run. Additionally, the daughter’s boyfriend tags along, and CHP and Boyfriend must also learn to overcome their differences and realize that they both love Daughter equally and want what’s best for her.

Because Daughter is a female in a Michael Bay movie, at one point, she gets kidnapped along with Optimus Prime, and so CHP, Boyfriend, and the remaining Autobots have to rescue them.

And just in case there aren’t quite enough plot threads going on yet, because we really need a few more at this point, we also learn that Transformers are responsible for the extinction of dinosaurs sixty-five million years ago.

That’s like nine different plots altogether. Age of Extinction is two hours, forty-five minutes long. I am surprised by this, because it literally felt like I was sitting in that theater for fifteen fucking hours. The movie just went on and on and on. And I have no idea why it even needed to be so long, or why it had to have so many plot threads at the same time, since it ends on a cliffhanger, meaning that there’s probably going to be more movies in the future anyway. This movie dragged so much that I nearly left the theater partway through to go home. I only stuck it out to see the dinobots, which at that point were the other things that I even remotely cared about. Unfortunately, they don’t actually show up until the end of the movie. 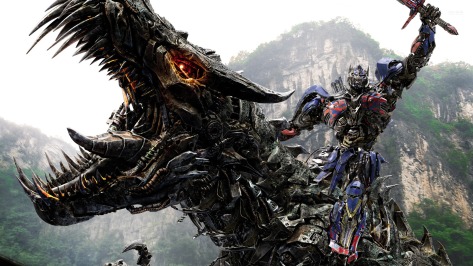 To be fair to the movie, CHP, Daughter, Boyfriend, and the other human characters are a little compelling, and despite finding them mostly bland, there were a few moments I was invested in their characters. The financial problems CHP and Daughter go through and how they deal with that, blame each other, and attempt to reconcile their differences was by far one of the more interesting aspects of the movie. But with everything else happening, the film didn’t have a lot of room to expand on these characters. To an extent, I also liked the head of the tech company and his partner from China. I certainly liked all the human characters here better than most of the humans in the previous movies, but so much was going on that it was hard to get to know all of them, and they ended up being rather stereotypical. Hell, the partner from China—and random other characters from China—all know kung-fu, because they’re Chinese, I guess. And in case you thought that was bad, there’s a Samurai Transformer and he likes to stand around quoting haikus.

Yet compared to the other movies, Age of Extinction was certainly less offensive, less racist, and less misogynistic, but it was just as boring and drawn out. Except for the Dinobots. This could have been a good movie had it focused more on a single plot instead of trying to shove as many in there as it could. Some things, like the Megatron plotline, really should have been cut out entirely and other things, like the fallout between Autobot and human relationships after the last film, should have been expanded on. But instead of developing these plot threads to the extent they should have been, I guess Michael Bay just wanted to add in more explosions and unnecessary long fight sequences. I would totally skip this movie if I were you.

3 thoughts on “Transformers: Age of Extinction; Just as Bad as We Thought It Would Be”