Before I’m done talking about Otomen, I wanted to address a few more issues that arose in the manga. And to save me the trouble of potentially forgetting some points and having to marathon all seventeen available volumes again (how do you people do that? I’m impressed) we’re going to cover these in quick succession. 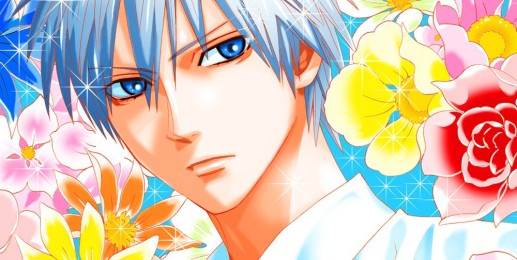 I mentioned two points in my previous post that I plan to shed a brighter light on. One, that Asuka’s mother has an illness and two, that the manga slips into something closer to horror than shoujo in some sections. This isn’t implying that Asuka’s mom is slowly turning into a zombie or anything like that. The horror in this series is much less fantastical and much more terrifying.

In the first chapter, it’s established that Asuka was very young when his father left. However, it wasn’t because the marriage between him and his wife had started to turn sour; rather it was because he declared that he had always wanted to “live [his] life as a woman.” (I won’t be going into this during this post, but Aya Kanno, the author, seems to imply that Asuka’s father is not transgender, but simply wanted to live as an otomen himself.) Due to this moment, Asuka’s mother, Kiyomi, has developed an aversion to men doing girly things that is so severe the mere thought of her son enjoying making cakes or crocheting is enough to make her legs give out. She even faints a couple times due to what Asuka is told is a weak heart (or what the audience can assume is a heart issue, as the manga simply calls it “shock”). Thusly, all of Asuka’s attempts at hiding his otomen-ness are for her sake.

At the beginning of the manga, this is played for laughs; a comical almost-fainting scene here, a couple intense moments where Asuka is almost found out there. Having an antagonist with such an easily solvable conflict helped to add to the series’s light-heartedness as well as helped show the divide between the different generations: the traditional older folks and the more accepting younger folks. As more and more people accepted Asuka and the way of the otomen, it seemed all but obvious that Kiyomi would follow in their footsteps and eventually accept her son for all of his talents, not just his “manly” ones.

But she doesn’t. Not by a long shot. 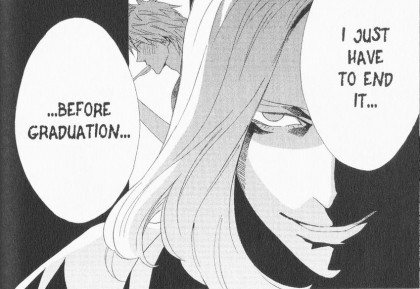 This is not a face that should be in a shoujo.

If you’ve read some of my older Manga Mondays posts, you’re pretty familiar with the fact that I enjoy a good psychological horror. However, in order to be effective—in order for any conflict to be effective—an author must keep track of both the overall tone they’re creating and the build-up of said conflict or horror. To be completely fair, the build-up of Kiyomi’s horror was well paced, but the tone ruined it. What I’m saying is that you can’t just suddenly throw in hardcore psychological abuse near the end of your cute and fluffy shoujo manga.

Let’s look at the progression here: Kiyomi starts by repeatedly telling Asuka that he shouldn’t be like his dad; that he should be the manliest man he could ever be. This arc includes subplots such as “get Asuka engaged to a spoiled princess” and “be proud that your son is dating a girl at long last”. However, as well as Asuka is keeping his mother from finding out the truth, the world around him is becoming more accepting of the otomen—something his mother can’t abide by. So to prevent the school from turning into a land of otomen and manly girls, she uses her power as principal of the school to hire four teachers (the next arc) and Asuka’s cousin, who hates otomen, to make sure no student acts outside of the gender binary. However, even this can be taken as an exaggeration of her phobia, and all the teachers are pretty much harmless and easily turn to Asuka’s side. Then there’s the third arc which I like to call “Kiyomi goes batshit”. As expected, Kiyomi at long last finds out that Asuka is actually an otomen, and has been an otomen since he was a small child. At this “shocking” revelation, she actually does faint, signaling a flare up in her heart problems, and needs to be taken to the hospital. Fretting for his mother’s wellbeing, Asuka vows never to involve himself with the otomen lifestyle again, even going so far as to cut off contact with all of his friends and his girlfriend because his mother is convinced that they’re a bad influence on him. Then, just to ice the WTF cake, we find out that Kiyomi’s illness isn’t real. That this entire time she’s been faking it simply to ensure that her son won’t do anything she doesn’t want him to. And she’s been interfering with all of his friends’ lives as well, either trying to ruin what they love or sending them out of the country. Seriously, what the fuck? 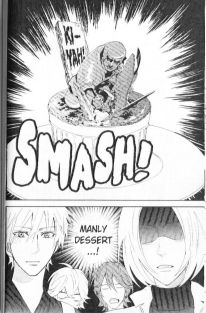 One of the previous solutions to the whole “don’t do girly things” problem.

In one scene, Kiyomi goes from annoying antagonist to “I have been abusing my child ever since my husband left”. She has forced her son to give up everything he loves for her own benefit, and he is clearly suffering from it. Additionally, she allows her son to believe that he alone is the source of the persistence of her so-called heart trauma.

The problem here doesn’t arise from having the plot focus on an abusive parent, but from how much time Kanno doesn’t allow herself to flesh it out. For sixteen volumes, Kiyomi’s prejudice had been shown in a comical manner and her tactics were easily subverted. However, this tonal shift throws the entire comic off balance and we’re given a conflict that barely has time to form, let alone have any chance of being resolved well. From what I’ve seen so far in the manga, I can assume that it’ll end with Asuka’s dad saving him from Kiyomi and Kiyomi finally coming to terms with otomen and bitterly giving up her binarist thinking, yet that’s no longer respectful to the trauma Asuka has been put through. This is not an evil plot an author can tie up with a ribbon: this is years of ingrained beliefs that can’t be shoved aside just as soon as someone says “it’s okay to like girly things”.

Honestly, I think what happened is that Kanno figured out what she wanted to do with Kiyomi and her villain arc much too late in the series. Nonetheless, that doesn’t change that there’s really not a good way she can tie it up now. Of course, Asuka will end up overcoming his mother’s scheming, but there is no cost for him. He doesn’t have any trauma from his abuse other than “I’m sad that I can’t do this”, and that’s not something an audience can bond with easily, especially given the sudden seriousness of the situation. Ignoring the longevity and impact of Asuka’s trauma as a whole is actually rather insulting when you look at the larger picture, and that’s really a shame. However, it’s not nearly as shameful as how Kanno treats another issue in Otomen. That’s for next time, though.

7 thoughts on “Putting the “Oh (Shit)” In Otomen: How Not to Write Abuse and Its Effects On A Narrative”