Last month Image Comics released a new title by the famous writer-artist team Kieron Gillen and Jamie McKelvie, best known for PHONOGRAM and Young Avengers. Their latest project, The Wicked + The Divine, tells the story of twelve gods who appear on earth in human form every ninety years, inspire the masses, and then die within just two years. In the 21st century “recurrence” these deities live out their time on earth as the most worshipped of all figures: pop idols.

The gods who appear in The Wicked + The Divine represent a wide range of different theistic traditions and mythology, some of which are familiar to the casual reader and some of which are more than a bit more obscure. In honor of the release of issue #2, I’ve created this brief field guide to six of the twelve gods of the pantheon. As the other six appear in the story I’ll update with a part two.

Disclaimer: I am not a practitioner of any of the religions here mentioned, so my knowledge is as a well-read but uninvolved outsider.

Amaterasu is a sun goddess and one of the most prominent deities of the Shinto religion. The first mention of her is found in a text from 680 CE. She and her two brothers, Susanoo and Tsukuyomi, created Japan with their paintbrushes. Amaterasu has a strained relationship with her brothers: Tsukuyomi, the moon, distressed her by killing another goddess, so Amaterasu separated night and day so she would not have to share the sky with him. Susanoo, the god of the sea and storms, treated her rudely and so she hid from him in a cave and deprived the world of light. She was only lured out again by the sight of her own reflection and the crowing of a rooster. A mirror is kept at her shrine in Ise, said to be the actual mirror that brought her out of her cave. The Japanese imperial family claims to be descended from Amaterasu. In the comic, Amaterasu is the most benevolent, kind, and patient of the gods introduced so far. She responds calmly to criticism from an interviewer and inspires a kind of widespread euphoria during her stage performance.

In Christian tradition, the name Lucifer is used to describe an angel—associated with selfishness, manipulation, greed, and hubris—who defied God and was cast out of heaven. The first mention of Lucifer (literally “morning star” in Latin) in the Bible is in the Book of Isaiah, which describes how he attempted to make himself “like the Most High” only to be cast down into the underworld. This story is most likely borrowed from the Canaanite story of the god Attar, who tried to dethrone the king of gods, El. When he was unsuccessful he left to rule the underworld instead. It is now common to use “Lucifer” and “Satan” interchangeably because of the similarities between the Biblical and Canaanite stories. A loosely-organized religion known as Luciferianism (not to be confused with Satanism) has adopted Lucifer as a symbol of guidance and enlightenment, as per his original “morning star” title, but the association with evil is much more culturally prominent. The Lucifer of The Wicked + The Divine (a woman who goes by Luci) does not seem to embody the absolute evil that Christian religions are fond of. Though impatient, sexual, and apparently quite fond of cocaine, she has not shown any inclination toward cruelty and claims that she’s “not a jealous god.”

Sakhmet (more commonly transliterated as Sekhmet) is a lion-headed Egyptian goddess paradoxically associated with warfare, fire, and vengeance, as well as healing, menstruation, and reproduction.  Though chaotic and dangerous, Sakhmet can also cure disease, avert plagues, and encourage fertility, and as such she is seen as a balancing force. Because of her volatile temperament, Sakhmet is one of the deities most commonly depicted in ancient Egyptian religious art. These tributes and the rituals for which they were used were an attempt to please her and prevent her destructive behavior. Like many Egyptian deities, Sakhmet is also linked to the sun: the dry midday heat is her fiery breath, and she is said to have created the desert in a fit of rage. The lineages of Egyptian gods are very convoluted and vary from one reading to another, but Sakhmet may have been a daughter of the sun god Ra. All she has done in the comic so far is get overexcited about a laser, but Luci’s joking comment about her “coming into heat” is either a pun or it implies that she may have some kind of connection with fertility in her human incarnation.

Unlike the other deities represented in The Wicked + The Divine, the name Baal is not representative of a specific god from a specific religion. The word “baal” is a Semitic term that may refer to any deity worshipped by various cults in the ancient Near East, or even to a human of significant authority, a master craftsperson, or the head of a household. Because his symbol in The Wicked + The Divine appears to be a ram, and because his tattoos seem to have a Mediterranean motif, it’s likely that “Baal” in this context is referring to Baal-hamon, a horned god worshipped in ancient Carthage. Though many iterations of Baal are associated with fire and possibly with the sun, sources from the 5th century BCE suggest that worshippers of Baal-hamon burned their own children alive in tribute to him. Little else is known about this deity, but he may have connections with Dagon, the Babylonian fertility god, and El, the highest Canaanite god. Baal’s only appearance in the comic so far is a brief TV interview, where he argues against Lucifer’s imprisonment.

Translation: most likely derived from “Mahomet,” another spelling of “Muhammad”

Bahomet’s name and iconography have been associated with witchcraft and paganism since the middle ages. Symbols such as the goat and the pentagram have been assimilated into various modern occult religions, the most well-known of which is Satanism. The first record of the name Baphomet (written as Baphometh) was in the confessions procured from members of the Knights Templar by torture. King Philip IV of France considered the Templars a threat to his rule and accused them of a multitude of sacrilegious crimes, but inconsistency among the Templar confessions suggests that the cult of Baphomet was an invention of the inquisitors. It is likely that the only factual basis for worship of Baphomet was the incorporation of certain Muslim ideals into Templar practices during the Crusades (Baphomet is almost certainly a French derivation of “Muhammad”). Early Christian views on Islam and he sinister nature of “Baphomet” imparted by the French inquisitors during the Templar trials led to a connection between Baphomet and devil-worship. This “false god” element of Baphomet’s cultural history seems to be playing out in The Wicked + The Divine, as he shows up to The Morrigan’s concert carrying her severed head and declares himself “the new King of the Underground.” 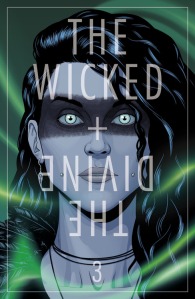 The Morrigan (sometimes mistakenly connected with Morgan le Fay of Arthurian Legend) is a goddess of battle and death who often takes the form of a crow. The sight of The Morrigan on the battlefield was thought to inspire those she favored and strike fear into her enemies. Her premonitions regarding who would live and who would die in battle may be the inspiration for a more generalized mythical creature that came into lore in later centuries: the banshee. In addition to her more violent inclinations, she is also a deity of land, wealth, and sovereignty, and how malevolent or benevolent she is varies from one story to the next. The Morrigan is sometimes described as a trifecta or part of a trifecta of goddesses, and at other times an individual. This multiplicity may account for her changes in loyalty and aggressiveness in different narratives. The Morrigan has not actually appeared (alive, at least) in the comic, but she is on the cover of issue #3, so it’s likely there will be some flashbacks to explain her character.

Four of the remaining six gods have been mentioned in dialogue but have not yet appeared in the story: Inanna, Woden, Tara, and Minerva, and in the wheel of twelve symbols inside each issue cover, one icon depicting a laughing mask and a crying mask is not obviously associated with any of the gods pictured or mentioned so far. As more of the pantheon are revealed, I will update with a part two of this guide.

5 thoughts on “Oh, My Pop Culture Religion: A Deity Field Guide to The Wicked + The Divine”