So first things first: following Nickelodeon’s buttload of production and publicity gaffes with this season of Korra, Nick has made the decision to air the rest of this season solely through digital. (If you haven’t been keeping up, the show’s been getting terrible ratings on TV due to its rushed release and utter lack of publicity build-up, but it’s still doing very well digitally.) Also, the remaining five episodes will be airing over the next four weeks instead of the next two, with the two-part finale coming out on August 22nd. Finally, despite all the hoopla, the series will still be getting its fourth season. This has been your post-SDCC Korra Panel news update.

Now that that’s behind us, let’s move onto the episode review.

Our episode opens on Opal’s going-away party—after a fun family dinner, they send her off to the Northern Air Temple. As she airships away, the Zaofu officials close up the city’s huge security walls for the night. However, Zaheer and his peeps have wasted no time in getting to the city; they’re already inside when the giant metal petals close. They sneak into the Beifong family’s complex, drug Korra, and steal her out of her room, but their sneaky escape is thwarted when Bolin and Mako raise the alarm. After an intense battle, Lin and Su manage to rescue Korra, but the peace and security of Zaofu have been shattered. The next day is spent in interrogations as their truthseer, Aiwe, attempts to ferret out which guard let the criminals in. 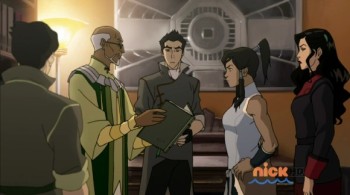 However, the gang quickly realizes that Aiwe himself, as the only person in the city who can actually get away with not telling the truth, is the most suspicious, and when they go to his house to investigate, their fears are confirmed. Aiwe has a secret tunnel under his house and detonates a bomb when he thinks Korra and co. are going to follow him into his escape tunnel.

Su is understandably shaken by the revelation that her truthseer was a big old liar, and Korra is desperate to hunt down Zaheer. However, Lin forbids Korra to go after him because it’d be too dangerous. Su pretends to support Lin’s decision at first, but later shows up in Korra’s chambers with the keys to a jeep full of supplies. She tells Korra that she only said what Lin wanted to hear and encourages the gang to head out after Zaheer that night. The episode closes on the now-adultless Team Avatar riding away from Zaofu.

I do commend this episode on its writing; although I suspected that Aiwe was up to no good, the episode didn’t telegraph it too clearly. It wasn’t until the kids confronted him that it became a hundred percent certain that he had turned to the dark side.

While I am happy that Korra was not kidnapped by a band of escaped convicts, I am kind of disappointed too. It’s not that I wanted her to be kidnapped or anything—it’s just that eight episodes is a lot of time to spend having absolutely no idea why these people are after the Avatar. Zuko made it pretty clear in the first episode of The Last Airbender that capturing the Avatar would help him regain his honor; what’s in it for Zaheer? Ransom? Power? The thrill of the chase? I thought that maybe if Korra had been kidnapped, Zaheer might get monologue-y and I’d finally find out.

I continue to be suspicious of Su, even after all this time. Whether or not she was livid about Aiwe’s betrayal, sending a bunch of kids out to capture the criminals who just laid utter waste to her compound doesn’t seem like a move I’d expect from the calm, measured woman we’ve seen in previous episodes. Maybe she’s just not thinking clearly, but the whole situation seems sketchy.

My one other complaint about this episode is that, while it did actually have Asami in it, she still didn’t really have anything to do. During the bending-focused standoff she basically just sat there in her pajamas, and her character didn’t really get any chance to shine during the investigation either. Meanwhile, Mako got to exercise his detective-ing skills, Bolin got to be a crack shot, and Korra’s metal- and airbending skills saved the day on more than one occasion. At least now that they’ve left Zaofu, Asami might be able to move back into the spotlight.

And we got this fabulous reaction image.

I’ve become accustomed to having two episodes to dissect rather than one, so it’s a little odd to have to wait till next week for “The Stakeout”. That said, however, this episode was good, and I’m looking forward to finding out what happens next.

6 thoughts on “Legend of Korra: “The Terror Within” Review”