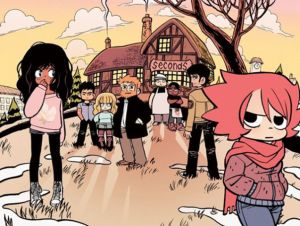 Shortly after writing this article, I learned about Bryan Lee O’Malley’s new graphic novel Seconds. I was happy to hear that the main character was a renowned chef with her own restaurant, yet I was a bit worried. Sure, Scott Pilgrim was an entertaining movie and comic, but there are a number of issues I had with the story and the character development. Was this meant to be a wild ride like Scott Pilgrim, or was it going to fulfill the promise of a more mature story?

Seconds is about twenty-nine-year-old Katie, who built the restaurant Seconds (O’Malley uses a lot of clever wordplay in this comic) with her friends. Four years later, she’s known as the best cook in town, but her friends have moved on from the business. Unsatisfied with her life, she plans to build a new restaurant in nearby Lucknow, despite the building being over her budget. 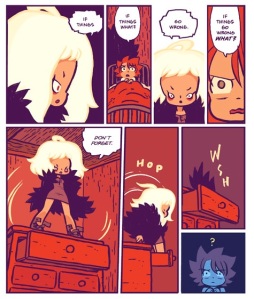 One night Katie has a dream about a girl called Lis standing on her dresser who tells her to look in the top drawer. She ignores it and goes on about her day. Though she doesn’t work at Seconds anymore, she talks to the diners to see if they enjoy her recipes. She sees her ex-boyfriend Max dining there and coldly shoots him down. Then Katie fools around with Andrew (one of the cooks) during his shift, when she hears a scream from the kitchen. One of the servers, Hazel, has burned her arms badly with hot oil. As the only person available to drive, she takes her to the hospital. 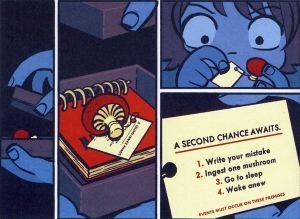 Is it ever a good idea to eat mushrooms with “magical effects”?

Later Katie falls asleep and has a similar dream from the night before. In a somewhat delirious state, she walks over to the dresser and opens the drawer. Inside she finds a box with a spiral notebook, a card, and a red mushroom. On the card it says, “A second chance awaits.” After reading the card, she decides to try it out. She writes about how she wished she hadn’t messed around with Andrew that night, eats the mushroom, and goes to bed.

She wakes up experiencing events much like the day before. She sees Max and walks off. She doesn’t spend time with Andrew. She stops the accident with Hazel in the kitchen, and wakes up confused. Katie quickly realizes what happened: if she eats a mushroom, she can go to the past and relive any day, but still retain her memories from both days. She starts to harvest more mushrooms when Lis shows up to try and take them away, saying that using them comes with consequences. Katie ignores her and continues to use the mushrooms as she pleases. 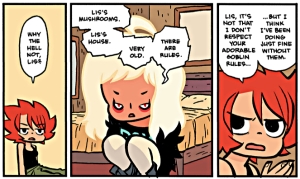 Katie finds out that Lis is a house spirit, who continues to manipulate her dreams and the state of the restaurant, either moving furniture around or moving people from place to place. Lis tries to stop Katie from using the mushrooms once again, but Katie is determined to make her life perfect. She visits her new restaurant as it’s being renovated, and takes home a peculiar pot hidden in an abandoned fireplace. As she continues to mold her life the way she wants it, a dark aura seems to grow in Seconds. Katie notices that her choices start “glitching”, as changes start happening without her say. Hazel suggests that a second house spirit might be fighting with the spirit from Seconds for control, causing the glitches. Katie learns that the second spirit came from the pot, but before she can stop anything else from happening, the dark aura becomes a physical being and steals the last of her mushrooms. The world becomes a snowy wasteland as Katie is left alone with the shadow spirit.

Distraught, she tries to reason with the spirit and find out why everything has disappeared. The spirit explains that Katie has chosen to leave her old world, and that this was what was left. In order for Katie’s wishes to come true, a new world had to be created, and they were stuck in this “dead world”. Katie finds a way to calm the spirit, and finds a mushroom hidden away from a previous stash. She gives it to Lis (who managed to survive somehow), who in turn returns everything back to normal. Katie wakes up in a hospital, and everything follows the events of her original life. Things go smoothly: she gets to renovate her new restaurant the way she wants to, and none of the house spirits cause any more drama. 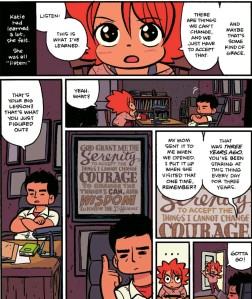 I had to put the book down by this point… Why is he the only one to give her a reality check?

The story is interesting, but it left me feeling frustrated. Seconds spends most of its time showing Katie trying to make her life perfect (if she’s not abusing this magic effect to binge on TV shows and alcohol), yet by the end she seems to learn nothing at all. Originally she uses her first “wish” to help Hazel, but afterwards she uses them for purely selfish reasons. The comic even makes a joke out of how she never seems to learn anything.

Katie has the same problem that Scott did in Scott Pilgrim: she has no personality. As I tried to think of how I could relate to Katie, I found that not only could I not relate to her, there was nothing that made her a well-balanced person. She’s a good cook, but otherwise, she was just greedy and expected things to always go her way, no matter the cost. Scott was the same way: he just wanted what he wanted, and his only real skill seemed to be fighting. At least in the end, Scott apologizes for what he’s done—Katie just seems thankful for a minute and goes back to the way she was before. While they may not have wanted to upset people, they didn’t think about how their actions might affect other people.

I appreciated the research on restaurant work and recipes, yet there wasn’t much focus on the fact that Katie is a chef. It isn’t until the end of the comic that the narrator mentions how Katie enjoys that her cooking makes people happy. That would have helped flesh her out as a person, rather than a device to move the plot along. If there was backstory of why she wanted to be a chef, or even about her four year relationship with her ex and why they broke up to begin with, Katie would have seemed like a more real and relatable character. 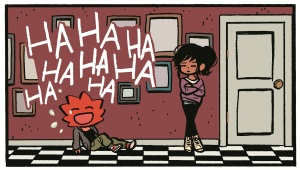 Okay Sonic. Laugh at the girl who actually knows what’s going on…

What frustrates me the most is the treatment of the characters of color in the story. Hazel is constantly helping out Katie, even when comic shows her manipulating her for answers. She has always believed Katie, no questions asked, even when Katie starts ranting like a nut about magic mushrooms. Katie mutters a small “thanks” to Hazel in the hospital in the end and that’s it. Hazel tells Katie that she thinks of her as a friend, yet there’s no mention of them staying friends, just that Hazel dates one of the cooks from Seconds.

Max is basically a model of the sensitive hot boyfriend. As mentioned before, we spend a lot of time following Katie as she tries to create the perfect life for herself. When she makes more worlds, she focuses more on how her relationship with Max is going. At some point they’re trying to build a restaurant together, and she couldn’t agree with him at all, down to the fact that the new restaurant wasn’t going to be named after her rather than both of them. She’ll redo the same exact day just so Max isn’t mad at her anymore, rather than apologize and try to respect him and his opinions. In the end he mentions that he doesn’t want to wander around like a bum without her, and in the past he says that Katie helped him straighten out his life. Is it worth being with someone who disrespects you so much? Why does he accept being treated like that? 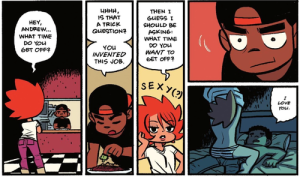 What is happening right now…  This is no good!

The worst by far is how Katie deals with Andrew. At first both of them have a… generally beneficial relationship. When Katie starts using the mushrooms, she literally sleeps around with Andrew and wipes the slate clean the next day. As new worlds start developing, he admits that he has feelings for her, and has great respect for Katie and her restaurant. Finally he says that he doesn’t want to be manipulated by her anymore. At this point she’s married to Max, and she still messes around with Andrew, but acts like their time together meant nothing to her.

Oddly enough I like the story because it has the same wit and charm that Scott Pilgrim had; however, I’d argue that Seconds had more problems with its story, from how unlikable the main character is down to how most of the characters of color continue to be mistreated in O’Malley’s novels. I really wanted to outright love this comic, but maybe my expectations were too high. It’s a good read if you try not to take it too seriously, which is kind of a shame since it touches on many mature themes that deserve more thought. 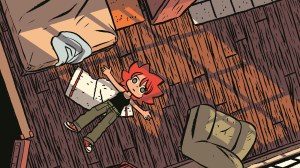 1 thought on “A Review of Seconds: A Second Helping of Scott Pilgrim”