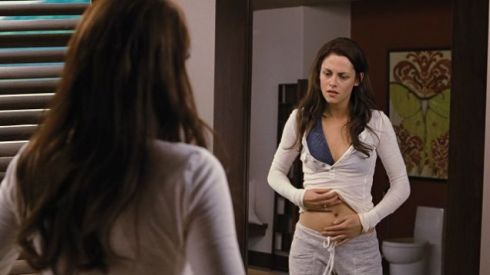 I recently started watching Torchwood for the first time, and I’m in love with the show. Unfortunately, I’m currently stuck in the second season, and I’m hesitant about continuing. Why, you may ask? Well, because the very next episode involves a mystical pregnancy, and that is one trope I have a hard time suffering through.

We’ve talked about the Mystical Pregnancy trope before, and it should come as no surprise that we find it both sexist and horrific. The Mystical Pregnancy trope normally involves a female character who is impregnated against her will. Or, alternatively, if she does consent to the sex, the baby for some reason or another will be evil and/or dangerous to her health. Regardless of how and why the pregnancy occurs, the baby will definitely be unique by either being a scientific impossibility or by being exceedingly magical.

But what makes this trope so bad is that it turns cis women’s bodies into a thing of horror. It literally reduces a character down to her reproductive functions. As Lady Geek Girl put it:

Mystical Pregnancy is so dangerous because it really does attack women at a biological level. If women and their natural biological functions aren’t portrayed as evil, then women are forcefully impregnated and manipulated into giving birth when they don’t want to. The men around them use their pregnancy to control their lives. Throughout history men have tried to control and manipulate women through their bodies.

More often than not, this trope is used as a one-time thing—appearing in either one chapter or one episode of a story, and the victimized women in question appear to suffer little to no long-lasting trauma from the pregnancy. This goes to show a fundamental misunderstanding of women and their rights. No woman would simply move on after having experienced such a violation, yet that is what we see over and over again. 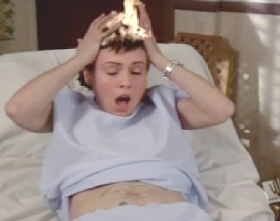 The baby is so evil it even sets her hair on fire.

Let’s look at Charmed. At one point, Phoebe ends up pregnant with Cole’s baby. She consented to the sex, and the two were excited about the new addition in their life. Unfortunately, Charmed seems to operate on the belief that good and evil is genetic. Despite Phoebe supposedly being a paragon of good, Cole’s evilness is the more dominant trait, and therefore the baby is evil. Later on, her pregnancy is stolen by a sorceress—the sorceress uses a spell to remove the baby from Phoebe’s womb and put it in her own—and though Phoebe is upset for a little bit afterward, she ultimately just writes the incident off, and says one of the most senseless lines in the show. Paraphrasing:

It was always her baby, not mine.

No, this is a baby that Phoebe and Cole both wanted and actively tried to have. But the show then turns this around and makes the child inherently evil—even though the child is still in utero and there’s no way to actually know it’s evil—and then somehow also expects us to believe that Phoebe is glad someone stole it from her. 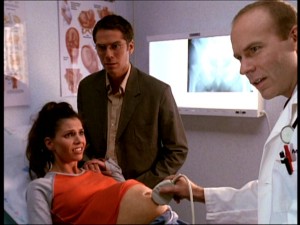 This also should have killed Cordelia. Becoming pregnant this quickly would have caused both her uterus and stomach to rip open.

Sadly, other shows are worse than Charmed in this regard. Though Charmed spent a good couple of episodes on this plot thread that ultimately went nowhere, that’s not the case for most stories. In Angel, for instance, there’s one episode in the earlier seasons dedicated to this trope. Cordelia has a one night stand with someone, and she wakes up the next morning eight months pregnant as a result. This is horrific for a number of reasons. Not only is her baby a demon that’s probably going to kill her, we can also view the pregnancy as a punishment for her daring to be sexual with a stranger of her choice. While Cordelia was the one to eventually kill the demon, this was still an episode I could have done without. And even after the fact, Cordelia, like most other women used in this trope, had little to no long lasting emotional trauma.

I think Stargate SG-1 handles this trope a lot better than the other stories mentioned here. The Mystical Pregnancy trope wouldn’t be that bad if the stories that used it actually addressed the mother’s issues and the standards and regulations that a largely patriarchal society places upon women and their bodies. Though Stargate doesn’t handle all these issues very well, it at least makes an attempt to show how a Mystical Pregnancy can affect the characters. Vala is mystically impregnated by the Ori, a group hellbent on spreading their religion throughout all the galaxies and murdering those who don’t convert. That said, despite being mystically impregnated, the rest of the pregnancy is actually normal. Vala doesn’t end up with her baby’s psychic powers—which is what happens in Charmed—and during the pregnancy, we actually do see the society she lives in ostracize, torture, and demean her, both for her own religious beliefs and for not carrying her husband’s child.

It’s only after giving birth to her daughter Adria, the Ori’s Chosen One, that Adria starts to grow up very quickly. This is something that is difficult for them both to handle. Adria experiences headaches and other adverse physical reactions to the change, and Vala who, during her pregnancy, had grown attached to Adria, is clearly upset and concerned by what is going on. Though Vala attempts to hide her emotional attachment to Adria all throughout the following season, we do see that this clearly affects her, and that even the thought of Adria dying is upsetting to her as well. Furthermore, Adria, despite doing evil things and becoming the show’s main antagonist, is not inherently evil herself. Even though Vala does not worship the Ori, Adria refuses to kill her own mother and even shows deep concern for her on several occasions. Though their situation is hardly pleasant and their relationship with each other is remarkably unhealthy, Stargate does a fairly decent job showing what kinds of emotional issues both these characters would have. 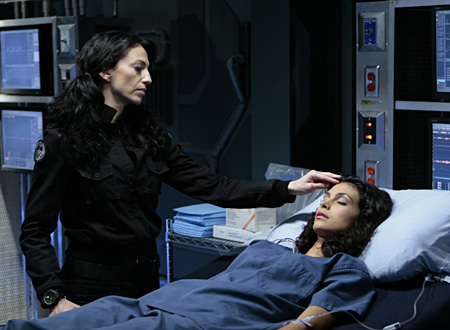 Mystical pregnancies are one of my least favorite tropes, because they are normally a one-time thing used for the sake of horror. Essentially, they portray a woman’s biological function as something inherently evil and use it to punish female characters. More often than not, this trope is used in a way that harms women, which is one of the reasons I’m now holding off on Torchwood. Though Stargate is not the best show at handling issues, it at the very least doesn’t brush them aside. I really wish that stories would stop using the Mystical Pregnancy trope, since so many of them fail to follow through on the emotional consequences, but so long as we’re going to have this trope in our stories, those stories need to make an effort to further explore women’s issues realistically.