Birthday near Christmas, Cosima had said. That sucked. Did it? Delphine wanted to say, Who says I am a Christian anyway? to expose the bias of her charge’s mind, the part that assumed blonde white French girls must have grown up with a cross on the wall and a midnight mass to go to instead of staying up for Santa.

Who says I am a Christian anyway? She thought about it. It was too revealing. She kept her mouth closed.

The subject leaned across the table, eyes wide and made even wider by the dancing reflections on her glasses. Influence of external conditions, Dr. Cormier thought. The subject’s myopia, induced by long nights reading under the covers with a flashlight, was well-documented by now; she had no need to make note of it. But make note of it she did; her eyes traced the thick line of the frames and the thick line of kohl underneath, the lashes and strong brows and tan skin making up a perfectly unique, perfectly identical organism.

Maybe, Dr. Cormier thought, if she stepped back she would be able to see the subject for what it was. A scientific miracle, a first step on the moon, a perfect copy. Maybe looking too closely, with Cosima leaning across the table so far her wrap sweater threatened to steal a sip of wine for itself, distorted the full image, like looking at the shape of puzzle pieces and forgetting the picture they comprised.

I love Orphan Black, but I’ve always been a little iffy about Dr. Delphine Cormier, Cosima’s girlfriend and monitor. Cosima fell instantly for Delphine’s French accent and blonde curls, but, you know, sometimes Cosima makes bad life choices. Delphine was quickly revealed to be an employee of the Dyad institute, someone who worked directly for Leekie, but she claimed that she really did love Cosima. Were we supposed to buy it? I wasn’t so sure, especially after it looked like she and Leekie had been in a relationship, or were at least seen in a compromising position. Was Delphine lying? Or was she telling the truth? By the end of Season 2, the writers had pushed us firmly towards the latter, but I still couldn’t shake the feeling that it was all a poorly written version of the “I don’t love girls, I just love you” trope. And because the show is mostly from the point of view of the clones and their allies, we got very few scenes from Delphine’s perspective to help us clarify the situation. Fortunately, fanfiction can be from any perspective the author wants. Enter today’s fanfic rec: Experimental.

While Cosima often gets scenes in which she’s doing science, many of the Cosima-and-Delphine science scenes end up with the two of them… clearly with other things on their mind. Experimental starts before Delphine has even met Cosima and focuses on Delphine’s career as a Dyad scientist who’s studying the clones. When she’s assigned to be 324B21’s monitor, at first she’s thrilled. Finally she’ll get to see one of her subjects in person. But she quickly gets confused between the clinical, impersonal way in which she’s been talking about and discussing the clones, and the personal way in which she’s starting to relate to Cosima. As a proper scientist, she’s worried that her bias for Cosima may have a negative impact on the study that she’s been a part of for so long. This dilemma is reflected excellently in Delphine’s internal monologue—she seems lost, betrayed, in love, and such a scientist through it all that I wanted to pull out a pencil and note down all her observations. 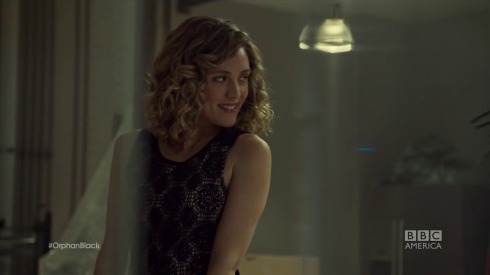 In this fic, Delphine gets to be a person, not just a monitor who the audience should maybe be suspicious of. Experimental lays bare Delphine’s character and motivations, and we get to see the Orphan Black world through her eyes. The author doesn’t go out of their way to tell us whether or not Delphine is a good character or if she’s doing the right thing, but they do explain everything that she’s thinking, all her sizable rationale for her each and every action. The result is that Delphine seems real and relatable in a way that I never got from the show. It’s a great piece of writing.

You can read Experimental here on the AO3! It’s only 7k words, so it’s a good, thoughtful character study that won’t take too much out of your day.