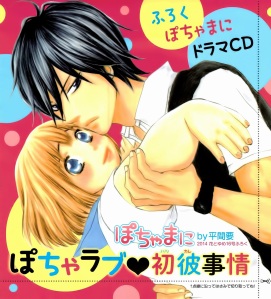 Let’s face it: finding media of any sort that’s ready to delve into fat acceptance is few, far, and in between, especially when it comes to heavier girls and women. As we here at LGG&F are all about body positivity no matter one’s size or looks, I feel it’s important to share when we come across pieces of media that may focus on addressing on some of these issues. Or, if not addressing these issues head on, at least acknowledging that they do exist and that these standards we force on people in the name of beauty are ultimately harmful. Additionally, it’s good to point out that while body acceptance might be a topic or a theme in said media, that it may not necessarily be tackled in the best way. This is the case with the manga Pochamani.

While we’ve already looked at this cute shoujo series once before, I wanted to look at it a bit more in-depth concerning the issues it covers now that I’ve read it for myself. And while I still had my disappointments, I discovered that there was more beneath the surface than I was originally expecting.

Just to recap, this short series by author Kaname Hirama focuses on the high school romance of Tsumugi and Yukiya; however, its “selling point” is that this romance is somewhat unconventional. That is to say, Tsumugi is overweight (but still cute) and Yukiya is a stereotypically good looking boy. The story isn’t exactly linear in the sense that it has a plot—it’s just a bunch of vignettes that go in a fairly chronological order. From confessions to dates to even teaching her how to swim, Pochamani hits all the stereotypical shoujo notes in a somewhat fluffy, non-offensive manner.

Tsumugi as a protagonist is a figure that many girls would be able to see themselves in. She’s cheerful, friendly, and bubbly, but still worries about a lot of the things a young girl would, especially her weight. These discussions of Tsumugi’s concerns are where I think Pochamani is a bit more nuanced than it may seem at first glance. There are, of course, the discussions of how people view her because of her heaviness and the ever-looming sense of self-loathing she works so hard to overcome. She expresses that though she has tried to diet, it never seemed to work for her,  and she talks about how she wanted to love herself as she was, even though the people around her didn’t accept her at first. While the “you have to love yourself before anyone else can love you” narrative can be problematic, it’s important to have a character who is clearly comfortable with her body and loves herself, but also still has those days where it’s hard to love herself because of how she’s viewed. Being positive is great, but always being positive, especially in a culture that is so damned intent on forcing a specific standard of beauty on you, is just unrealistic. 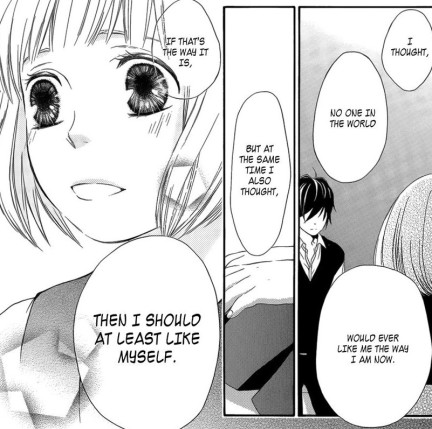 The series also takes an unexpected look at the budding sex drive of teenage girls: and issue that carries just as much importance as body positivity. After a couple months of dating Yukiya, Tsumugi feels like she’s drawn closer to him. She wants to touch him, and wants to be touched. However, she feels that if she brings up these feelings, or even the fact that she has them at all, it would mean that she’s an “easy woman”, and so she starts pushing her boyfriend away. Thankfully, Pochamani doesn’t reinforce such antiquated notions, instead telling its audience that it’s perfectly okay and normal to have these feelings. It also uses the example of Tsumugi’s best friend to state that even if you do decide to have sex, it doesn’t make you less valued as a woman or as a person.

These messages are great, however, my issue with this manga comes with the aspects that aren’t necessarily about Tsumugi directly. The title itself is a good example of this. Pochamani can roughly be translated to something like “chubby mania” as the word it’s derived from—pochama—describes someone who’s into soft, squishy things, or has a preference for chubby people. Yukiya is a self-proclaimed “chubby maniac”, which is why he takes an interest in Tsumugi in the first place. While it’s totally fine to have preferences, Yukiya is fucking creepy. Even before they start dating, he takes every opportunity to squish Tsumugi’s arms (even though she says she’s fine with this, it’s still really… eugh) and extol the virtues of chubby women over thinner women. It’s nice to see a girl being loved because of her weight rather than despite it, but Pochamani really makes it seem fetishistic rather than normal. And indeed, every chapter starts with some character offhandedly mentioning that Yukiya is a perfectly good waste of a hot boy because he’s a creeper who can only fall in love with fat chicks. Even when he tries to change his behaviors re: weird touching, he immediately goes back into it only a few pages later. Hirama tries to balance this weirdness out by having Yukiya state that he’s also fallen for Tsumugi’s positivity and smile, but something about it just doesn’t ring true to me; their relationship already left a sour taste in my mouth, and that’s hard to get rid of. 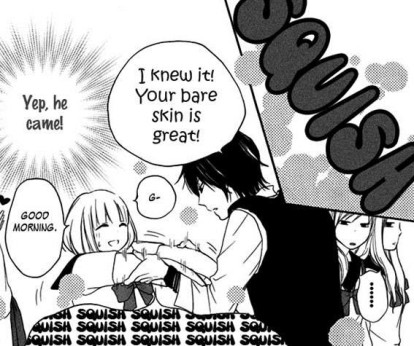 It’s kind of cute, but at the same time no thank you.

Furthermore, although we’re told that Tsumugi’s inner strength comes from learning to love herself (a process that happens before the events of the manga and isn’t elaborated on) and on her own terms, almost every other step of acceptance and learning she, and other girls, comes to is done in the context of men. Tsumugi starts feeling self-conscious? She only feels better once she realizes that Yukiya is okay with her no matter how she is. Discussions of weight? After the first chapter, it’s all discussed in context of how boys view her and how easily she thinks it would be for a skinnier girl to date her boyfriend. I’m not saying these points aren’t valid—it’s a constant battle that I’m well aware of—but it would have been nice for Tsumugi to have some chapters in which she realizes that even if Yukiya went away, she’d still be fine. She doesn’t need him to validate her self-worth.

Maybe that’s a little much to hope for in an eleven chapter manga. However, for what it’s worth, I do believe that Pochamani is worth a read. Even if I was a little put-off by Yukiya, it’s nice seeing a larger girl being in a cute, semi-normal relationship, especially in a world that seems to be so sure that larger women are incapable of being in a relationship—especially a physical one—until they slim down.