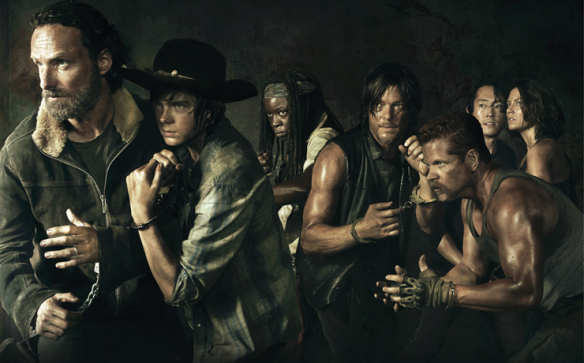 Well, The Walking Dead has finally returned for what will be another season I will probably both love and hate. In the season opening, despite how we last left our characters—they were about to be cannibalized by the people at Terminus—we surprisingly have no major character deaths and even get a happy ending for once.

We discover this week that Terminus actually was a sanctuary at one point in time. But the people there were attacked, caged up, and some of them raped by outsiders who abused their hospitality. So our Terminus inhabitants fought back against their abusers, and now they kill everyone who comes there, because they don’t believe they can trust anyone. I’m not sure when they took up what the show probably wants us to perceive as Satanic worship, but whatever, I guess.

No, really, The Walking Dead. You want to explain this?

Tyreese, Carol, and Judith have yet to reach Terminus, but they come across a Terminus member outside the sanctuary setting up fireworks to distract walkers. After subduing and learning from him what kind of place Terminus really is, Carol goes off alone to try to save the others.

She reaches Terminus just in time and causes a huge explosion with some of the fireworks. This provides just enough of a distraction for all of our main characters to escape, and both they and Carol kill just about all the Terminus inhabitants in the process. Once outside the sanctuary, Rick and our continuously growing group dig up a bunch of guns that they hid and buried in the woods last season. Rick wants to go back into Terminus to kill anyone who might have survived, but Abraham and Rosita think that’s a horrible idea and that they should just leave. I suppose from Rick’s point of view, though, killing everyone from Terminus makes sense. They didn’t manage to kill the Governor during the first fight with Woodbury, and he came back and destroyed their home. And I get the impression that Terminus’s leader, Garret, is going to be the next Governor-like villain in the show.

The argument is cut short, however, when Carol reunites with the group for the first time since last season. After Daryl runs to her and they share a hug, she leads Rick and the others back to Tyreese and Judith, where much more hugging ensues. The episode ends with all our protagonists, minus Beth (who was kidnapped last season), united in one place and starting what will probably be an incredibly long hike to Washington. Before leaving, though, Rick covers a Terminus sign with mud and writes “No Sanctuary” on it—which is not a very effective sign, come to think of it. His warning about Terminus is going to be destroyed the next time it rains. But thankfully before that happens, Morgan, who we haven’t seen around since Season 2, is heading to Terminus, and he comes across Rick’s warning. He then starts tracking our survivors. 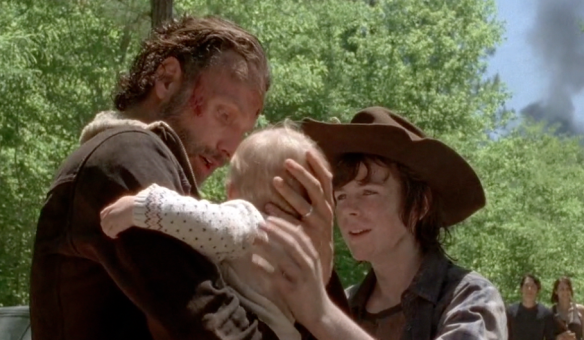 Beth might still be missing, but at least something good happened. I’m sure it will end in tears later.

Overall, I liked this episode. It was nice to see our protagonists have a semi-happy ending for a change. And I was also glad that Carol was accepted back into the group, even though she told Tyreese that she was planning on leaving after she got him and Judith to safety. I really adore her relationship with Daryl and was super happy to see them reunited with one another. I am also really looking forward to seeing more of Daryl this season. Despite not appearing in the comics, Daryl has become a fan favorite character—and recently the writers have hinted that he might also be LGBTQ+.

If this is true, it’s something that I’m both happy about and a little annoyed at. Daryl’s character starts off as a racially insensitive, clichéd redneck, who over the course of the first four seasons becomes a much more interesting and layered person. And he even loses some of his old prejudices along the way. Having a character like him come out as LGBTQ+ would be amazing, since he would completely undermine a lot of stereotypes.

That said, invisible representation is not representation. If he really is gay the show has at the very least hinted at it. He has turned down Carol’s advances and instead retains a platonic relationship with her, and last season he also turned down an offer of sex from Beth. Additionally, unlike his brother who was always making remarks to other female characters, Daryl has never once mentioned finding someone attractive and has never even shown interest in finding another person. For all we know, he might be ace, not gay. We’ve never been told either way, so at this point just about anything is possible. Though Daryl’s background probably tells him that any non-heterosexual feelings he has, he should keep hidden, at four completed seasons in, I would have expected the show to let us know by now, one way or another. However, until the show tells us, I guess we’ll all be left wondering.

On another note, I’m really worried about Judith. In the comics, Judith is already dead, and at the end of this episode, Abraham and Rosita mention needing to tell Rick something that I think has to do with Judith, but Abraham decides to put it off because everyone’s so happy hugging each other. Sadly, we also don’t get to see Beth this episode, but hopefully she’ll have a happy reunion with everybody else as well in the future.

All in all, I’m looking forward to this season, and I was very happy that no one important died. I’m still upset from what I saw in “The Grove” and don’t know how much more I can take.

4 thoughts on “The Walking Dead: “No Sanctuary” Review”