I wanted to offer all of you a horror movie today. As one of the horror film lovers on this site—though my tastes tend towards the eye-roll worthy, admittedly—I feel that is it my duty to do so, especially in the spirit of this month. However, I’ve come to a realization that outside of a highly interesting-looking documentary on Quidditch (the sport of Harry Potter fame re-crafted for Muggle players) and a horror film about a Ouija board summoning that looks hilariously awful (like, Paranormal Activity 4 awful), there are just no movies I’d bother recommending. As such, I’m going to rec a film that’s already had its day in the sun but we’ve unfortunately missed talking about until now.

What We Do in the Shadows had a release back in January at the Sundance film festival, but as a mockumentary about vampires, now is as good a time as any to showcase this beautiful piece of movie gold. Acting as though it’s taking an inside look at the main characters’ lives, the film lays out the story of Viago, Vladislav, and Deacon. Each of these vampires are from a different era and hold different views on their immortality and powers, but what they are all faced with is the fact that they’re basically like everyone’s grandparents: they have no idea how this new-fangled technology works. In fact, these vampires have remained inside their home for so long that they have more troubles beyond technology; they barely know how to get along in the modern 21st century in general.

Luckily, instead of feasting on their prey as usual, a young university student named Nick accidently becomes a vampire. As such, the trio finally get the connection to the modern world that they so desperately need—but at a price. Nick is absolute shit about keeping the whole vampire thing under wraps, and the egos of the vampires were already in contention—Nick only serves to up that tension. Throw in a couple of vampire hunters and a pack of werewolves (who are not “swear-wolves” by any means), and you’ve got a recipe for disaster. A very fun disaster. 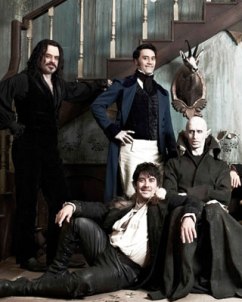 Although vampire flicks have been done six ways from Sunday and back again, I honestly believe that this is one of the most refreshing takes I’ve seen on it. Maybe it’s just my love for the documentary/mockumentary genre, but I think looking at the lives of vampires from that angle is really quite interesting—the audience gets to experience what the vampire, who has been alive for centuries, sees himself as, as well as seeing what a huge nerd he actually is. It’s kind of like Ichabod in Sleepy Hollow, sans the company of badass ladies who get shit done.

And really, that’s my only problem with the flick: not really a lot of female characters. Of course, as a documentary, the focus isn’t really creating a diverse cast as much as it is looking in on a very, very slim portion of the population. But still, a couple more important ladies would have been nice.

1 thought on “Trailer Tuesdays: What We Do in the Shadows”