Part 1: In Which the Protagonist Is Suddenly Male

One of my personal goals in 2014 was to finish Philip Pullman’s His Dark Materials trilogy. My friends pestered me to read it, my students asked me what I thought about it, and the internet at large can’t stop recommending it. Still, I’ve been putting off actually sitting down with the books for years. Pullman’s linguistic flair is impressive, but I still had to force myself to make it through a certain number of self-assigned chapters every day. It was a pleasure to re-read The Golden Compass, but the sudden shift to a male protagonist in The Subtle Knife was accompanied by a number of unsavory implications that are exacerbated in the last book of the series, The Amber Spyglass. If you’ve never encountered the His Dark Materials trilogy before, this entire essay is full of spoilers, so please proceed with caution.

The Golden Compass’s protagonist, Lyra, is a twelve-year-old girl living at Oxford University in an alternate universe version of Victorian England. This universe is “alternate” not only because of its steampunk aesthetic but also because every human being walks around with part of their soul exposed in the form of a “daemon”, an animal that best represents their personality. Lyra and her daemon become involved with a conspiracy involving missing children, who are being taken to the North Pole and subjected to cruel experiments, the purpose of which is to sever their connections with their daemons and thus free them from the influence of “Dust”, a quasi-magical substance that causes a child’s daemon to settle into a single form during the onset of sexual maturity. In process of rescuing the kidnapped children, Lyra enters a gateway that connects her world to our own, where she encounters a teenage boy named Will. Because of his absent father’s research, Will has long suspected the existence of other worlds, and he teams up with Lyra to embark on an quest to prevent Lyra’s father from waging a war on God that could have devastating consequences for all of the worlds in the multiverse.

When people say that Lyra is one of the best female protagonists ever to grace the printed page, I can’t help but agree—with reservations. Don’t get me wrong; I love Lyra. She is cunning and crafty, and she is especially adept at lying skillfully while at the same time manipulating others with her not inconsiderable personal magnetism. This is okay within the context of the story, of course, as she always lies for the right reasons, and in any case Lyra’s imperfections endow her character with depth and an intriguing degree of moral ambiguity.

The darker side of Lyra’s personality is more clearly represented by the primary antagonist of The Golden Compass, Mrs. Coulter, who just so happens to be Lyra’s mother. While Lyra lies and charms people to save herself and her friends from forces she could otherwise not combat, Mrs. Coulter lies and charms people to achieve more nefarious ends. Even though the reader is never quite sure exactly what these ends might be, it’s hinted that Mrs. Coulter is playing political games on multiple fronts for some greater purpose that may not be entirely in the best interests of the various sentient beings that appear in the novel. The evil of Mrs. Coulter’s character is a bit stereotypically misogynistic, at least in the sense of “romantically unattached middle-aged women with political ambitions are by default evil”, but oh how deliciously evil Mrs. Coulter is. Like Lyra, she’s a fascinating character.

Unfortunately, almost as soon as The Golden Compass ends and The Subtle Knife begins, both Lyra and her mother cease to be interesting. As I mentioned earlier, the protagonist and primary point-of-view character of The Subtle Knife and The Amber Spyglass is a thirteen-year-old boy named Will. Lyra is still an important character in the story, but it’s not really her story anymore. As Lyra ceases to be a hero, so too does her mother cease to be a villain.

Even worse, Lyra become almost completely subservient to Will. In my reading, the exact point at which this occurs is early in The Subtle Knife when Will tells Lyra not to use her alethiometer, the “golden compass” of the first book that essentially grants those who can use it omniscience. In response, Lyra promises Will that, from now on, she will never use it without asking for his permission first. I agree with Pullman that omniscience is a dangerous power that should not be treated lightly or taken for granted, but it would have been nice if Lyra could have figured this out for herself. Since Lyra’s use of the alethiometer was never previously demonstrated to have any negative consequences, it was jarring to me when Lyra’s decision to stop using it was motivated solely by the shallow irritation of a character whom Lyra had only known for three or four days, and whom I as a reader had only known for several dozen pages.

As for Mrs. Coulter, she suddenly discovers that she is a Mother who Loves Her Baby and therefore does everything in her power to Protect Her Child. She’s still a little evil, but only because she Loves Too Much. The primary antagonist thus becomes Lyra’s father, Lord Asriel, who is epically building an epic fortress and martialing an epic army for the epic purpose of destroying God… or fighting angels… or hunting down Will… or something. To be honest, I’m not really sure what he’s supposed to be doing, as Pullman devotes the majority of his narrative focus elsewhere. In any case, by the end of The Subtle Knife, it’s clear that Lord Asriel is now hosting the villain party, not Mrs. Coulter. If the main protagonist is now male, perhaps it only makes sense that the main antagonist is now male as well.

I get the feeling that Pullman was doing his best to include lots of Strong Female Characters. Serafina Pekkala, the leader of a clan of witches, provides aid to Lyra partially out of a sense of fondness towards one of Lyra’s traveling companions, who was once her lover. Juta Kamainen, a courageous and independent member of Serafina’s clan, murders Will’s father and kills herself almost immediately thereafter. Lady Salmakia, a tiny humanoid warrior, is hired by Lord Asriel to spy on Lyra and Will but gradually befriends them. The physicist Dr. Mary Malone unwittingly travels from our universe to one in which she can better observe the effects of Dust disappearing from existence, and she later becomes something of a mentor to Lyra. Unfortunately, such characters flicker in and out of the story, appearing suddenly only to then disappear without warning. 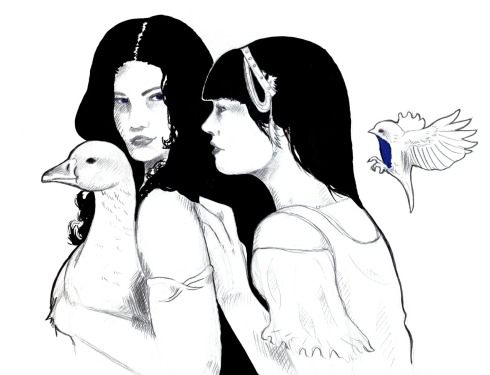 None of the adult female characters in the books gets her fair share of narrative attention or character development, but that’s probably because it’s Lyra’s magical twelve-year-old vagina that’s important, not their yucky adult woman vaginas. After all, why should our time be wasted on what Serafina Pekkala thinks of leadership and free will, or what Juta Kamainen thinks of guilt and suicide, or what Lady Salmakia thinks of honor and duty, or how Dr. Malone reconciles physics and metaphysics, or even how Mrs. Coulter resolves her inner conflict over a man who styles himself as Lucifer, when we could instead be solving the greatest mystery of all: Why is it that (most) girls have vaginas?

Point your alethiometers web browsers towards the Sexualized Saturdays column next week for the second installment of this essay, in which you can read about comatose heroines, daemon petting, and why I wish the protagonist of His Dark Materials were female.

4 thoughts on “Sexualized Saturdays: Innocence and Sexual Maturity in His Dark Materials, Part 1”