There are a lot of awesome things on deviantART. While browsing about a year ago, I kept finding fanart of these four characters. Naturally, I looked up what they were from and found out they are the main characters of a show called RWBY (pronounced “ruby”). When I first started watching the series, I thought the writers were going to abuse the fact most of the main characters are female and oversexualize them. To my relief, they don’t. The characters are treated like human beings, and they’re respected for their fighting prowess. Even when the characters seem to be modeled from female archetypes! Not only that, but the writers avoid using the nice guy trope, or in this case how no decent guy ever gets a date. The character progression is well done, and I couldn’t be more excited to see where this series goes!

Rooster Teeth is a production studio that makes a wide variety of projects, from Let’s Play videos, comedy sketches, to many other things. In 2013, they premiered RWBY on the Rooster Teeth website. RWBY presently airs for free on Crunchyroll and YouTube.

A Creature of Grimm, called a Boarbatusk.

The show is about a group of four girls that train at Beacon Academy to become Huntresses. All students are put into teams, and our main protagonists are part of Team RWBY (an abbreviation of the team members’ names). They fight monsters called the Grimm, which take the form of animals yet are not animals themselves. Not much is known about the Grimm, outside the fact that they don’t kill out of necessity. The group also fights against an unknown organization that has been stealing large amounts of Dust (what magic is called, and the form it takes in this world). The objective of that organization is also unknown (at least from this point in the series), though agents have been planted into the Academy.

Despite the fact that each of the main characters follows an archetype, they break out of that mold quickly and continue to impress me.

The leader of Team RWBY is Ruby Rose. Though she is a cheerful and hyperactive girl, she is one of the best fighters in the show. When she appears in the first episode, not even thirty seconds goes by before she’s throwing someone out a shop window for trying to rob her. She’s a perfect example of how being young and bubbly has nothing to do with being weak and defenseless. As the show progresses, she starts to question herself and her skills, especially when another team member starts to antagonize her. After getting advice from one of the teachers, she understands that she can still be enthusiastic and enjoy her time at the Academy, but she’s also responsible for sharing that enthusiasm and her fighting experience with her team.

Weiss Schnee acts like a pretentious tsundere. She makes a point of telling people that she is the heir of the largest company that mines and distributes Dust. At first Weiss doesn’t get along with anyone, even questioning why Ruby is the leader of their group. She continually expresses the importance of strategy, down to the point of consistently having a perfect fighting stance. Weiss constantly gets irritated with Ruby’s aggressive approach to fighting and her light-hearted attitude during classes. Weiss believes she deserves better for the dedication she puts into her training. As Weiss continues to train with Team RWBY (or more specifically Ruby herself), she learns that there is more to being a leader (and a team member) than being the perfect fighter; it’s about respecting each other.

Blake Belladonna appears to be a lone wolf. In the beginning she preferred to be alone and rarely shared what was on her mind. Even when she starts to trust her team members, she tries to spy on and fight the mysterious organization on her own. At the end of the first season, we find out that Blake is a cat Faunus, or a human with animal traits (usually animal ears or tails). Faunus have been discriminated both in the Academy and in the general public, yet the team treats her as an equal. She sees her teammates as friends now, and they continue to respect Blake’s heritage. Another thing the writers avoid (which I am extremely thankful for) is not sexualizing the Faunus. There’s never a point where they are considered more attractive because of their appearance, and the show doesn’t spotlight these characters for being moe. The most the writers do is make offhand jokes about random Faunus (Blake has a fondess for tuna, and one episode she chases a laser pointer beam… fairly innocent puns.) 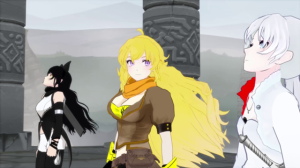 Yang Xiao Long is one of the most powerful fighters in the show. Despite being “the busty one”, she’s had no untoward jokes, complaints, compliments, or advances because of her body type. The show doesn’t go out of its way to make a point of how Yang is dressed, and it’s such a nice change of pace from other shows. She joined the Academy to train to be a Huntress, and the men in her class treat her as a fighter, rather than eye candy. Even the way her fighting is animated is dignified. There aren’t different physics for her chest that showboat her body, and there are no panty shots to be seen! This is a low bar, but when there are women with Play-Doh boobs twisting in strange positions in other media, I’ll take any realistic portrayal I can get.

Jaune Arc is the leader of the Team JNPR (pronounced “juniper”). For a while the show castes him as the clumsy green-horn, and the “nice guy”. While he’s generally a nice person, I was so thankful that the show didn’t promote the idea that because he is a nice person, he’s entitled to date the person he wants to. Throughout the series, Jaune has had a crush on Weiss. When Beacon Academy holds a dance party, he asks Weiss to accompany him, and she says no. He doesn’t complain about how unfair his situation is or how Weiss is such a terrible person for rejecting him; instead, he asks for advice from his friends and teammates. When he’s advised to tell Weiss how he feels about her, he stops to ask another guy why he upset Weiss by not going to the dance with her. He’s still thinking about Weiss’ well being, even above his own. Later, he even fulfills a bet to wear a dress to the dance, and has fun with his friends, despite feeling silly. I didn’t expect Jaune to be that selfless, but the fact the show didn’t have him complain about how he was dateless was a nice change.

Roman Torchwick, one of the villains of RWBY.

There’s so much to like in this show, from the original soundtrack, to the choreographed fighting scenes. One of the things I particularly enjoy are the number of references in this show. Several characters are based off the stories of the Brothers Grimm (Ruby is similar to Red Riding Hood, for example), while others are based off of other works like Clockwork Orange. Initially I wasn’t a fan of the 3D models (since I’m a fan of traditional animation), but now I can’t recommend this series enough! All of the characters presented have been getting great development, and continue to grow from the trials they face. It’s remarkable how much the characters progress in only seven-to-fourteen minute intervals!

What do you like about RWBY? Let us know in the comments below!

1 thought on “RWBY: A Gem In Progressive Character Development”