I’m what you might call a part-time anime fan: I enjoy the genre, but I’m far from an encyclopedia of knowledge about the medium. My experience with it began with Tenchi Muyo!, then Sailor Moon to Dragon Ball Z, all through the Toonami block on Cartoon Network. While I enjoyed these shows, my real love for the medium began thanks to this week’s Throwback Thursday: FLCL, pronounced Fooly Cooly (released in America in 2003). This show combined absurdity with the heartwarming moments of a coming-of-age-story. For a younger me, this was exactly what I needed. It’s known for being a difficult show to describe, or understand, really, but I’ll try my best. 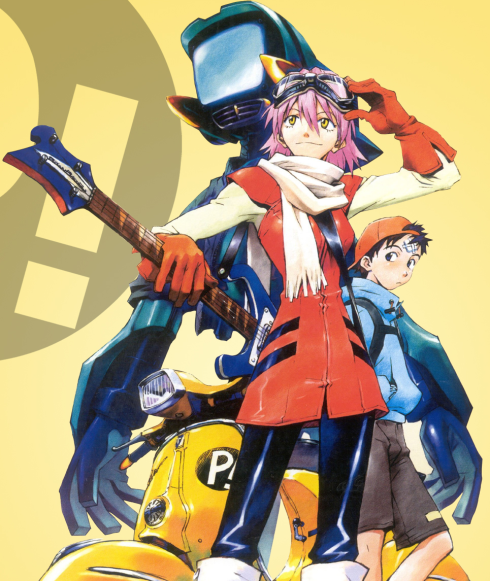 To summarize quickly, FLCL focuses on Naota Nandaba. According to him, “Nothing amazing happens here. Everything is ordinary.” This is essentially his mantra at first, which of course leads to the opposite. He lives with his father and grandfather in a fictional Japanese town. Although he’s a young boy, he spends much of his time with his older brother’s girlfriend, Mamimi. Shortly after, a suspicious woman hits him with a Vespa scooter and eventually her blue vintage Rickenbacker 4001 left-handed electric bass guitar. Her name is Haruko Haruhara and her arrival brings along many strange events for Naota’s and his friends’ lives. To describe the plot without spoiling it too much, after Haruhara’s attack, a strange protrusion forms on Naota’s head, eventually forming a life of its own and transforming into a set of increasingly dangerous beings. Each episode brings new protrusions for the cast to deal with. AV Club did a very in-depth plot review if you’re interested in a close synopsis and short on time. This first protrusion, a robot named Canti, eventually becomes a house assistant for Naota’s family and the main fighter of the following head protrusions.

The robot gets stronger

Before I get into the thick of reminiscing about this work of art, the first thing I want to mention is the show’s fantastic music. Like all of my favorite media, music plays a big part in setting the mood. Whether the scene shows intense action or tranquility, the score provides suitable tunes. Much of the soundtrack consists of songs from the pillows (lack of capitalization intentional), a Japanese rock band. Their tracks have a distinct sound that feels natural with the scenes they accompany. My personal favorite use of their sound is the song “Come Down”, which appears alongside art-shifts into a black and white manga style.

After that, the first thing I notice when watching is the show’s odd sense of pacing. Because it is an OVA consisting of just six episodes, it has to move at a decent clip to include a well-fleshed out plot. The blazing pace may be what loses a lot of viewers; on a first viewing, it seems as though the events are random and disconnected: Some of the scenes meander slowly with deliberate animation, some scenes utilize sloppy and ridiculous art jumps, and some exemplify typical high-energy anime fight scenes. Even if these scenes actually were random and disconnected, there are some visually stunning set-pieces, humorous scenes, and interesting fourth-wall breaks that make a viewing worthwhile regardless. But FLCL isn’t all style without substance. There is certainly a huge enjoyment of the rule of cool, and more than just a dash of wackiness, but it’s a sturdy structure rather than a house of cards. Because well-built characters and symbolism abound, there is a lot to take in. Its unique pacing drew me in quickly. I’m not personally a fan of long, drawn-out storylines, so the brevity gave me a chance to experience it all while keeping all the details fresh. In addition, the choppy scenes clashing with the slow scenes was a great reflection of the peaks and valleys of real life’s pace. Again, this only added to the story and appealed to me.

It’s calm here, but the next scene is very active

Given a critical look, FLCL is a coming-of-age story of a young boy going through a puberty-like stage of his life. The references to sex aren’t explicit, but they are far from subtle. For example, the first growth sprouting from Naota’s head is horn-shaped and he ends up inspecting it suspiciously behind closed doors. Throughout the episode it grows until it bursts. In this case, the result is fighting alien robots, but the symbolism is very noticeable. Although Naota’s budding sexuality is the most blatant showing of his growth, he needs to mature in other ways throughout the entire plot. He starts out emotionally immature and purposely aloof to everyone around him (to seem cool and to shield his feelings of abandonment). In this way, one could consider FLCL to be a story about becoming/being a man, rather than just a story “starring” one. This concept is enforced by the story not being a power fantasy in the traditional sense, but through Naota’s learning and becoming more in control of his emotions. Sure, Naota gets to wield a guitar and knock away a meteor to save the city, but this is only after accepting bravery and getting his emotions in check. His mantra of nothing amazing ever happening is a form of denial that shows his attempted indifference. 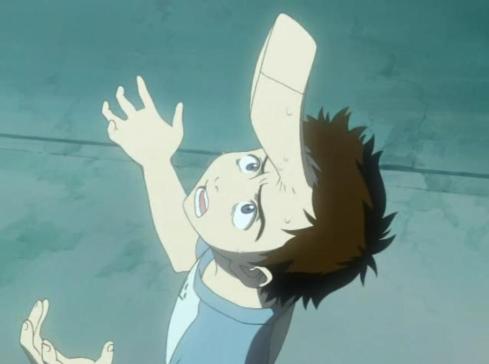 Naota’s character meant a lot to me growing up, as he felt like a more grounded approach to characterization. First, he doesn’t have any real powers. It’s true that he has a special channel in his brain that allows intergalactic travel, but he isn’t the one to truly utilize this, nor is he the only person with this power. Compared to other anime heroes, such as Dragon Ball Z’s Goku, Naota is exceedingly average. Next, his relationships feel plausible. There is struggle with the perception of adulthood as Naota continues to find those older than him to be unwilling to “grow up”. There is a sense of abandonment, especially since the only adult figure he seems to have respect for left to play baseball in America. His relationships also include the attention of a few girls, but it is nothing like the harem trope other anime sometimes portray. In fact, Naota’s struggle with his own emotional growth often puts those affections towards him in danger; something I’m personally all too familiar with. In a related subject, the women in his life mirror typical relationships that people experience. These women have distinct personalities with both positive and negative quirks. They’re written to have physical appeal, but that appeal is not their defining trait. We can all relate to this dynamic as we can be attracted to someone knowing that they’re far more than just their outward appeal.

FLCL is also inventive in portraying Naota’s involvement in the whole plot: He could be considered not the main character, but just a player in someone else’s story. This is most visible in the alien aspect of the story: he is used as a power source/ammunition for Canti, is just a pawn in Haruhara’s plan, and is used as a surrogate relationship for Mamimi (essentially replacing his brother). All of the other characters have their own lives and stories. Unlike many other coming of age stories, Naota doesn’t seem to be the center of anyone’s universe—even his own, really—and is simply the connecting thread. This is another relatable factor for viewers, as we know that other people experience life even when we’re not around. Additionally, this can ring true for people who feel powerless in their own lives, like they only live to support others, a feeling many may struggle with.

FLCL was fantastic because its setting feels realistic and cozy, despite the absurd situations happening in it. This contrast is what made the humor, action, and heart of the show feel cohesive and honest. A story like this was very relatable to me on a personal level. Naota’s complex feelings about growing up felt like a reflection of my own: feeling scared of stepping up to challenges, being unsure how to handle new and changing relationships and emotions, and dealing with loss. He definitely wants to feel cool and adult, but drastically misunderstands how to actually accomplish these ideas. For example, at the end of the series when Haruko leaves, Naota’s breakdown about losing her felt honest to me. He finally decides to be straightforward. Actually admitting your feelings to someone, only for them to walk away for good logical reasons, is something I’ve dealt with, along with various forms of loss, whether it be relationships, family, or pets. I think many can connect with that. Overall, I think FLCL creates an experience that still works today and is worth the viewing if you get a chance. 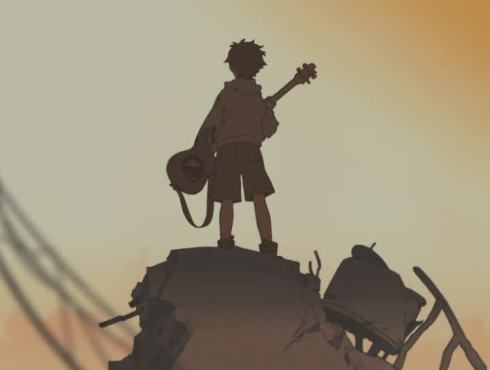