Sleepy Hollow came back for another episode last night, and after three episodes in a row that I utterly detested, I found myself enjoying “Magnum Opus” a great deal. This time around, Moloch is still rising to power, Katrina remains the worst spy in existence, Hawley’s for once nowhere to be seen, and both Ichabod and the Headless Horseman work out their identity issues. Hit the jump to find out my thoughts.

Our episode begins with Abbie teaching Ichabod how to play Charades when Katrina contacts them through a mirror. She lets them know that Moloch is on Earth and rising to power—which, to her credit, is the first useful information she’s given them since she started spying. Unfortunately, this backfires, and Henry discovers what she has done and uses the mirror for himself to spy on Ichabod and Abbie. Our two witnesses, knowing they need to stop Moloch, set out to find Enoch’s Sword, which, just like every other important thing in history that’s related to the plot, just happens to be buried in Sleepy Hollow. In order to find the sword, both Abbie and Ichabod need to “know [themselves] completely, or perish.”

Now privy to their plans, Henry sends the Headless Horseman after the sword as well. Abbie and Ichabod discover that the sword is hidden underground, where they also find a bunch of stone statues, one of which that looks exactly like one of Abbie’s ancestors. It turns out that the sword is guarded by a Gorgon, a creature from Greek mythology that turns people to stone when they look at it. As Abbie and Ichabod cannot fight something they cannot see, the lure the Horseman into fighting and killing it for them.

During the fight, a horn that signals the end of the world sounds. Abbie still hasn’t found the sword, and the Horseman is convinced that it doesn’t exist. For plot-convenient reasons sure to come back and bite him in the ass later, the Horseman decides to leave without killing our witnesses, because otherwise we wouldn’t have a story. After he’s gone, Abbie and Ichabod work together to find the sword, and just in time too. Moloch is fully grown, and it looks as though he, Henry, and the Headless Horseman are about to kill Katrina and force her to be the Horseman’s headless bride.

Though I find myself questioning what the hell a monster from Greek mythology is doing in Sleepy Hollow and despite my utter distaste for Katrina’s role in the narrative, I really liked this episode. As both Abbie and Ichabod needed to know themselves completely in order to find the sword, we got some really good character moments. We got to watch Abbie flip her shit over finding her dead ancestor turned to stone and worry about herself and Jenny, since every woman she is related to has died young for one reason or another. Abbie wants to not believe that that will also be her fate, and it’s only through her friendship with Ichabod that she can reassure herself that she is destined for a higher purpose. 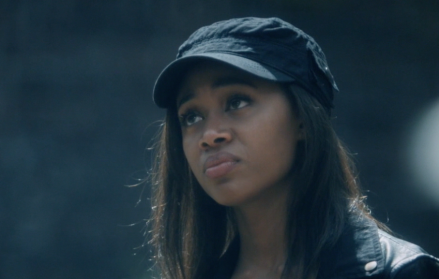 It was also nice to see Ichabod attempt to work out his own identity issues with the Headless Horseman and doubt himself in the process. He came to America and defected from the British due to the Horseman’s insistence. He ended up with the Horseman’s betrothed before they killed each other on the battlefield. And it was only due to Katrina that he made it to the 21st century. Ichabod’s issue is that he cannot know himself when his whole life has consisted of other people making decisions for him.

This episode was also nice because Jenny made another appearance. Until last week, which was a heavily Mills-family-centric episode and the only thing about that episode I genuinely liked, I was getting fairly annoyed that Jenny, despite now being a title character, has barely been in this season at all. Instead, we’ve been left with the character Hawley. While I don’t dislike Hawley as much as the other reviewers on this blog do, his screen time always seems to come at Jenny’s expense, so it was nice that he didn’t show up at all this episode and that Jenny was given something to do, even if her part this episode was fairly small. Jenny attempts to take Irving over the Canadian border since she believes it’ll be safer for him there. Unfortunately, he ditches her along the way and leaves a voicemail saying that he cannot run from what’s happening. Though I wish that “Magnum Opus” had given Jenny and Irving more screen time to expand on both their characters and Irving’s decision, at this point, I’ll take what I can get.

Watching the promo for next week, it looks as though Jenny is going to appear then as well, which is most definitely another plus. Now, my hope is that maybe Katrina’s character will also be allowed to do something. Until this point, she has been subjected to horrible trope after horrible trope, her super awesome magical powers have been utterly downplayed, she’s been easily manipulated, and despite being in a position to do some awesome spy work, her character has given our witnesses next to nothing. In fact, the one time she does send them information, it backfires. There is no reason why Katrina’s character should be shoved into such roles, and “Magnum Opus” doesn’t do her much justice either. As the episode ends, she’s about to be killed in a ritual to bind her to the Horseman. The damsel-in-distress role the narrative keeps shoving her into is getting old, and I desperately wish that next episode will do better with her.