Addams Family Values begins with Morticia going into labor and giving birth to her and Gomez’s newest baby, Pubert, who looks like a tiny baby version of Gomez, complete with a little mustache. Already feeling the effects of a needy newborn, Wednesday and Pugsley begin to feel jealous of their new young sibling. Gomez and Morticia decide to get a nanny to help with the kids, which eventually leads them to Debbie. Despite being blonde and perky, Debbie seems to fit in with the Addams family seamlessly, but there’s more to her than meets the eye. Debbie is actually a killer known as the Black Widow, who marries wealthy men and then murders them. Debbie is after Uncle Fester, and because Wednesday and Pugsley suspect her, she has them shipped off to summer camp, after which she seduces and marries Fester. The plot of the movie kind of falls apart after this, but it’s still pretty entertaining. Wednesday and Pugsley struggle with the evils of summer camp, and Debbie tries with little success to kill Fester before finally losing it and attempting to kill the entire Addams family. She is stopped by Pubert, who ends up accidentally electrocuting her while playing with wires. So Debbie dies, the kids leave summer camp, and the whole family is together again to be creepy and kooky.

Overall the movie is entertaining, but not really very plot-driven, and like the last Addams Family movie, it’s weirdly focused on Fester despite the fact that there are much more interesting characters surrounding him. And that’s probably the biggest bummer about this movie, because if the whole movie had been about Wednesday’s adventures at this awful summer camp, the movie would have been amazing.

The Addams family in general has been used to critique perceived social norms and point out how weird and even awful those norms are; because of this, the Addams Family is at their best when shown interacting with “normal” society. In the beginning of the movie while Morticia is giving birth, a young girl describes with elaborate fairy tale imagery where babies come from. Wednesday pithily responds to the girl by simply saying that her parents had sex.

Young Girl: And then Mommy kissed Daddy, and the angel told the stork, and the stork flew down from heaven, and left a diamond under a leaf in the cabbage patch, and the diamond turned into a baby!

Pugsley: Our parents are having a baby, too.

Wednesday: They had sex.

The movie gets really interesting when the kids are sent to summer camp. Watching Wednesday and Pugsley associate with overly privileged white yuppies brings us some hilarious moments. However, it’s Wednesday who shines in this movie over the rest of her family as she constantly deals with sexist views of her person, classism, and racism. Best of all, in the end, she gets her revenge. 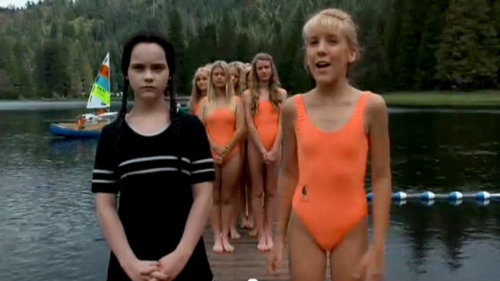 When Wednesday first enters the camp she is immediately accosted by one of the other girls, Amanda, who insults her for wearing all black and ask her why she looks like she is going to a funeral. Wednesday only glowers at Amanda and replies: “Wait.” When Amanda’s mother comes over to greet the Addams Family the mother immediately assumes that Wednesday as a young teen girl must be obsessed with boys.

Morticia: Wednesday’s at that very special age when a girl has only one thing on her mind.

Wednesday endures the sexism thrown at her when she is insulted for wearing a darkly colored and less revealing bathing suit, and she constantly deals with being told that she needs to be perkier and smile more. Each time Wednesday is confronted with sexism, she is always ready with a snide and witty comeback. As an Addams, she refuses to conform to the standards set by the camp and by society. Wednesday and Pugsley also deal with classism when they learn Uncle Fester is marrying Debbie.

Wednesday: Uncle Fester is getting married.

Amanda: Get out of the cabin. I mean, I’ll kill myself, the help!

Sadly we get no critique on this behavior from Wednesday, because Wednesday doesn’t particularly care for Debbie anyway since she is trying to kill her Uncle Fester. There also could be an element of privilege here since Wednesday’s family is so rich that no one even has to work. But the way the dialogue is written and the scene is acted it is made clear to the viewer that this is a ridiculous statement made by a classist rich girl.

Wednesday and Pugsley’s ongoing fight with everyone at the camp comes to a head during the camps performance of the first Thanksgiving. At a summer camp, one of the camp counselors, Gary, writes a play about the first Thanksgiving and is obsessed with the kids at the camp realizing his “vision”. It is just as awful as it sounds from almost the word go. The lead role is that of Sarah Miller, a pilgrim girl, whom Amanda is cast to play. Her other very white, very blonde, and perky friends are cast to play the other pilgrims. You would think, then, that the Native American characters in the play would have an equal role in the first Thanksgiving, especially given that the camp is called Camp Chippewa. But the counselors start off the casting of the “cheery Chippewas” by claiming that not everyone can be a star, before casting all the outcast kids in the roles of the Native Americans. And by outcasts I mean all the kids that have disabilities, are of color, or just don’t fulfill society’s beauty standards. And of course who is cast to lead the Native Americans but Wednesday Addams?

Now, yes, Wednesday is a very white and wealthy young woman, so casting her to play any Native American character is a problem, but of course the counselors don’t care. I mean, even the name of the camp is cultural appropriation. And the play itself is horrendously racist. Amanda, playing Sarah Miller, constantly refers to the Native Americans as being uncivilized because they “aren’t educated”, “don’t bathe”, and don’t dress like them. And all of this is accepted in the play as fact. Amanda states these things and the parents in the audience laugh, because of course they think they those things are all true. Wednesday has faked enthusiasm and wanting to be perky up to this point before she turns the tables on the play and all those at the camp, all while making an important statement about the racist and imperialist undertones of the first Thanksgiving.

Wednesday: We cannot break bread with you.

Wednesday: You have taken the land which is rightfully ours. Years from now my people will be forced to live in mobile homes on reservations. Your people will wear cardigans, and drink highballs. We will sell our bracelets by the road sides, you will play golf, and enjoy hot hors d’oeuvres. My people will have pain and degradation. Your people will have stick shifts. The gods of my tribe have spoken. They have said, “Do not trust the Pilgrims, especially Sarah Miller.”

Wednesday: And for all these reasons I have decided to scalp you and burn your village to the ground.

The whole scene is amazing and you can watch it here. Wednesday not only gets her revenge, but she also sends a message to all those watching the movie: Thanksgiving is a holiday that has its roots in racism and imperialism, and it purports a false sense of friendship in an attempt to gloss over the atrocities and genocide committed against an entire group of people. On top of this, the movie makes a point to tell the viewer that Native American people in this country are still treated like second-class citizens. It’s rare that movies address racism in the past, let alone racism that is still happening.

For this reason, if you have to deal with Thanksgiving festivities, at least attempt to acknowledge what a bullshit holiday this is by watching Addams Family Values. Let Wednesday school your family not only on sexism and classism, but also on the horribly racist history behind this holiday.