There are certain things that I just really cannot stand when it comes to retelling stories from the Bible. One of these things is the casting of white actors to play Biblical figures who lived in Africa or in the Middle East. Another is the attempt to “amp up” Biblical stories and make them more “action-packed”. That said, I have no problem with people taking creative liberties with Biblical stories as long as they remain true to the spirit of the original. Exodus: Gods and Kings seems to have committed all of the above atrocities on what would otherwise be a good Biblical story. But I don’t want to talk about the racist trainwreck that is Exodus: Gods and Kings (at least not much); rather, I want to talk about one movie that did it all right and explain why future movies about the Bible should follow its example. So without further ado, let’s talk about why The Prince of Egypt is one of the best damn retellings of a Biblical story pretty much ever. 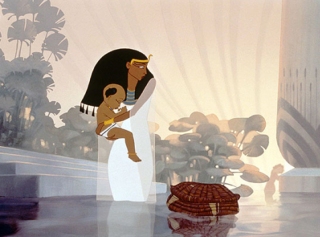 This animated movie released in 1998 is one of the best examples of reimagining a Biblical story. It’s a great movie that attempts to tell the Exodus story as a personal and intimate story about family. The movie follows Moses from when he was a baby and his Hebrew mother Yocheved set him adrift on the river to save him from being slaughtered by the Egyptians. He is found by Queen Tuya, who adopts Moses and raises him along with Prince Rameses. Moses grows up as a prince of Egypt, but things start to change when he comes across Miriam and Aaron, his biological sister and brother, who reveal the truth about his heritage. This sends Moses into an identity crisis, because while he was raised by a loving Egyptian family, he can’t abide that his people are being enslaved and murdered. This leads Moses to accidentally murder an Egyptian guard in his attempt to defend one of the Hebrew slaves. Confused and ashamed about what he did, Moses runs away despite Rameses’s insistence that he stay.

Moses eventually wanders into the land of the Midianites, where he meets Tzipporah and

Jethro after rescuing Tzipporah’s sisters. He learns about the Hebrew God from Jethro and eventually earns the love and respect of Tzipporah, and the two marry. Moses later encounters God, who tells him to return to Egypt to free his people. He does so and comes face to face with his families—both Egyptian and Hebrew—once again. The rest of the movie largely plays out as it does in the Bible with the plagues and parting of the Red Sea and such.

So why is this one of the best Biblical reimaginings ever? Well, to start, the whole cast is actually portrayed as people of color. Everyone from the Egyptians to the Hebrews to the Midianites are portrayed as people of color, because you know, if they all live in or around Egypt then they would have been. That’s just simple logic. Compare that to what is happening with Exodus: Gods and Kings, where director Ridley Scott said that he couldn’t cast people of color because the movie wouldn’t have been funded if actual Middle Eastern actors filled the roles:

I can’t mount a film of this budget, where I have to rely on tax rebates in Spain, and say that my lead actor is Mohammad so-and-so from such-and-such. I’m just not going to get it financed. So the question doesn’t even come up. (x)

To be fair, it is necessary to mention that with the exception of Danny Glover, the entire voice cast for Prince of Egypt was white, which isn’t acceptable, but the creators had the good sense to draw all of the characters as people of color in at least an attempt to portray the Bible accurately.

Prince of Egypt also isn’t filled with unnecessary action to make the movie more intense or exciting than it is actually supposed to be. There are definitely awesome and entertaining things written in the Bible. Between the plagues, Egyptian armies, and the parting of the Red Sea, there is enough action without adding more. Add to that all the emotional and psychological drama and you have one compelling and entertaining movie, unlike some other Biblical adaptations. The recent Noah movie decided to pump up the action by adding Noah fighting off armies and golems. The new Exodus movie doesn’t look any better, adding a dramatic violent sword-wielding Moses to the story. Do you remember that in the Bible? Yeah, neither do I.

And finally, Prince of Egypt certainly takes creative liberties with the story of Moses, but the creative changes they make are still within the realm of possibility and stay true to the spirit of the original story. For example, the Bible never names the Pharaoh that went head to head with Moses, but based on speculation by some historians it seems likely that it was Rameses II. Furthermore, the nature of Moses’s relationship with Rameses as they grew up is also never mentioned in the Bible. But probably the most powerful and heartbreaking relationship in Prince of Egypt is the relationship between the two brothers. Moses struggles to fight against the angry brother he once loved, while he struggles to reconnect with his blood relatives Miriam and Aaron, whom he didn’t know growing up. The movie is in no way a dry retelling of the Exodus story, but rather a poignant look at how these events affected and profoundly changed Moses and his family. A straight retelling of a Biblical story, while it may be accurate, doesn’t always make it relatable or give us a different take on a already well-known story.

Unfortunately, it seems that poor blockbuster remakes of Biblical stories are here to stay, at least for the time being. If these movie want to do well and portray the Abrahamic traditions they represent correctly, then The Powers That Be should take a look at Prince of Egypt and use it as a guidepost for future adaptations.