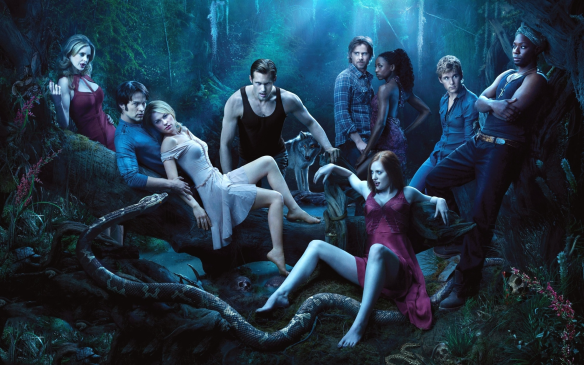 Trigger warning for rape ahead.

Well, after months of putting it off, I finally got around to finishing True Blood’s third season. Once again, I found myself absolutely adoring this show, while simultaneously hating a great deal of its themes. Last season put me off by its portrayal of religion, and it even featured a religious fanatic who attempted to sexually assault Sookie, because why the fuck not? This season also put me off by its gratuitous rape themes that existed for no damn reason. Despite being a really good show with an awesome female protagonist, True Blood’s biggest problem seems to be offensive clichés, and that is no more apparent than how the show treats both Tara and Eggs’s characters and their misogynistic and racist plotlines.

Normally, this is about the part of the review where I would briefly explain the third season’s plot, but before we get to that, let’s talk about Tara. Tara has, for quite a while, been one of my favorite characters on this show. She’s strong willed, she’s smart, she fucks up sometimes, and she seems like a real person dealing with real issues. She’s a relatable character and easy to get invested in. Unfortunately for Tara, she cannot seem to ever catch a break. Growing up with an abusive mother left Tara a very defensive and confrontational person. These were issues Tara ended up dealing with in the first season. Her storyline in the second season was about a rich white woman manipulating her and her fellow PoC boyfriend, Eggs. Both of them were mind raped and forced to commit heinous acts, and as the season ended, Eggs was murdered. 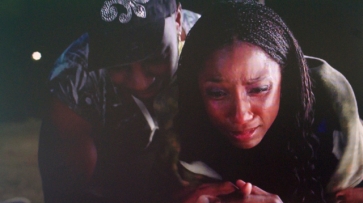 This season, it seems Tara will never see justice for Eggs’s death. Eggs was made out to be a villain, while the white cop who took credit for shooting him is heralded as a hero to the town. For anyone who’s been following the news, you can imagine that this is a situation that invokes a lot of negative feelings in a civil rights-minded audience.

To True Blood’s credit, we in the audience are supposed to view Eggs’s death as tragic. The show gives us some good moments to show that Eggs’s life did matter, and that his death causes some very real pain. The town of Bon Temps is a very racist area, and following Eggs’s death, Tara unfortunately has to deal with people badmouthing her late boyfriend, and even publicly urinating on the spot where he died. These scenes are almost entirely shown from Tara’s perspective, so she’s the person we’re supposed to relate to when they happen. Not only does True Blood make use of racism to show just how damaging it is—a Black boy died and literally no one cares—it also shows how damaging microaggressions and racism are as well. The whole subplot may be difficult to watch, but True Blood does a really good job handling it. However, it can also be a triggering narrative for more reasons than one.

In the wake of Eggs’s death and lack of support from her community, Tara goes through a suicidal stage, and it is only with the help of Lafayette, who went through his own traumatic experience at the end of Season 1, that Tara manages to pull through. This is also about where Tara’s character arc this season goes downhill. 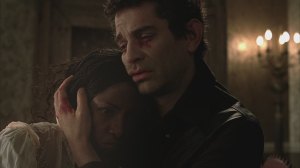 Just as soon as Tara seems to be getting better, she is once more victimized. Only this time, her victimization has nothing to do with advancing the plot, and literally only exists to knock Tara’s character down. It’s also one big rape-fest. A sociopathic and psychologically disturbed vampire named Franklin takes an interest in Tara. He ends up kidnapping her, terrorizing her, raping her, and even plans to turn Tara into a vampire so the two of them can be together forever. Tara, knowing that Franklin is convinced that what they have between them is love, is forced to play along with him for her own safety. Sadly, sexual assault is not the only thing she suffers at his hands. As Franklin is a vampire who doesn’t eat, he unwittingly starves Tara during her imprisonment because he doesn’t remember that humans require food every once in a while. When Tara mentions she’s hungry, she is given a bowl with a flower in it.

The entire season, we watch Tara be ruthlessly victimized and betrayed by people she knows. Bill, Sookie’s fiancé, knows Tara is in danger and does nothing to help her. Even though Bill is all but a captive himself, he makes absolutely no effort to get Tara out of her situation. Tara finally escapes after she convinces Franklin to untie her during another rape. Afterward, Franklin forgets to tie her back up and she beats his head in with a mace. Unfortunately, this is not the last time we see Franklin. He tracks Tara down and plans to kill her. Tara is only saved when Jason comes to her rescue and shoots Franklin in the heart with a wooden bullet.

Watching Maryann manipulate Tara and Eggs last season was horrific to watch. No, I wasn’t happy that Eggs died, even if I think True Blood does a good job handling his death. It had little to no bearing on the plot and only existed to further Tara’s already immense pain. Eggs went through a lot, suffered from PTSD, and didn’t get the help he deserved. I wanted him to have a happy ending. True Blood does justice to Tara’s storyline as well—we see Tara’s fear and are never left with the impression that she somehow brought it on herself. The narrative doesn’t neglect the negative emotional consequences Tara has to deal with and the feelings of violation afterward. 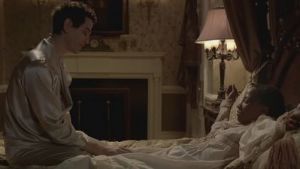 But like the issue with Eggs, while True Blood may have done this issue justice, that doesn’t make it any easier to watch. I am getting a little annoyed at True Blood’s insistence to show minority characters being traumatized and victimized at every opportunity. It’s unneeded and tiring. Let’s compare Tara’s and Eggs’s plight to Lafayette’s. Lafayette is a queer character. He’s openly gay, walks around in women’s clothes, and altogether refuses to conform to society’s heteronormative standards. We see Lafayette be belittled, mocked, and have his property vandalized. However, the instance that victimizes Lafayette and gives him PTSD—he was kidnapped and tortured by vampires for illegally selling their blood—has nothing to do with his homosexuality. It could literally happen to anyone in his situation, regardless of his gender, sexuality, or ethnicity. That doesn’t take away from the homophobia he does face. The point here is that True Blood manages to talk about homophobic and queer issues without brutally violating or murdering a queer character because that character is queer. And we can still see that it’s a serious issue. The same thing should have been true with Eggs and Tara. Eggs didn’t need to die for the show to talk about racism, and Tara didn’t need to be raped for the show to talk about misogyny and rape culture.

There’s a huge difference between being realistic and delving into racism and rape culture, and using those issues for the sake of shock value. Tara’s storyline was easily the worst part about the third season, but it’s sadly not the only blatant example of misogyny we’re subjected to, which I’ll talk about next time.