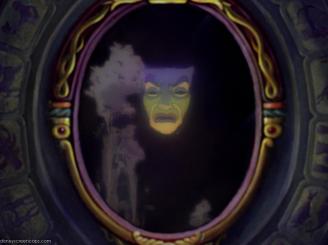 I’m sure some of you have heard the superstition “breaking a mirror brings seven years of bad luck”. Do you know where the sentiment originally came from? Apparently, back in the time of the Roman Empire, it was believed that “life renewed itself every seven years, and that breaking a mirror would thus cause damage to the soul it was reflecting at the time.” This mentality has stuck with us as it seems that the state of one’s soul is most commonly entwined with mythos about mirrors in fiction. While a mirror can sometimes trap a soul, I think one of the more interesting interpretations are when mirrors are used to show one’s inner desires, as well as how those desires can lead to one’s downfall.

Spoilers for Dragon Age: Inquisition under the cut.

I don’t know about you, but the first series that comes to mind when I’m thinking about mirrors is Harry Potter and its Mirror of Erised. Hidden away in Hogwarts’s darkest corners, when glanced into the mirror reflected the person in addition to their deepest desires. For Harry, it was being surrounded by his family. For the good Professor Quirrell, it showed him dutifully presenting Voldemort with the Philosopher’s Stone. And for Dumbledore? Well, supposedly him receiving socks. All harmless in theory, but one’s deepest desires usually aren’t things that are easily achieved and in the case of this series, they’re mostly impossible to obtain. 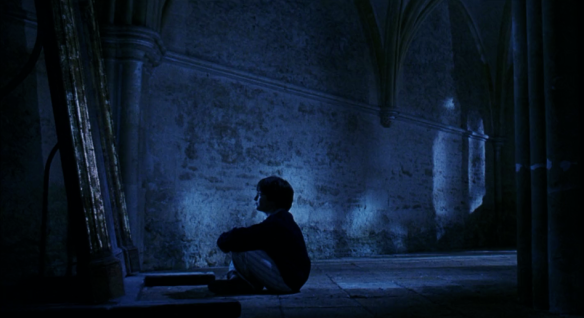 Harry cannot get his family back—he’s a wizard, not a necromancer—yet when faced with getting to see his parents in the most superficial and idealized of ways, Harry finds himself much more eager to spend time in front of the mirror than doing schoolwork or finding ways to not get duped by Voldemort and his minions. It’s all too easy for Harry to ignore real life in favor of this happy lie, but luckily he manages to break free of the mirror’s fairy tale. On the other hand, Quirrell’s plans are unraveled by what the mirror shows him. Yes, he desires to hand over the Philosopher’s Stone and be appreciated by Voldemort, but he has no idea where the stone may be. And in this, he becomes panicked and sloppy; so unwilling to believe he still has to look for the stone when the mirror shows him in possession of it that Harry is able to best him. Quirrell cannot overcome his desires to reach his goals, and I’d be willing to guess that he’s not alone in that. When your soul’s desires are reflected so simply, it’s easy to forget the struggles you have to go through to reach those, or even that it’s impossible to get that goal in the first place.

The same can be said about the magic mirror in Snow White. In her vanity, the queen repeatedly asks her mirror, “who’s the fairest in the land.” It’s an obsession that she can’t let go of. And so when Snow White is suddenly revealed as fairer, the queen’s entire world is destroyed. In the version I’m familiar with (the Disney version) she ignores everything: her duties as a ruler, her other qualities that Snow White hasn’t “bested” her at, all to make sure her soul’s desire is once again fulfilled—which only ends in her demise. While completely different than the Mirror of Erised in execution, the queen’s mirror shares the trait that it cannot lie. It’s the queen who sows her own destruction by being much more interested in her idealized world than the actual world around her.

While there are differences in how the Dragon Age universe handles this idea, in the end mirrors still play with the desires of those who seek them. Well, specific, special mirrors, in any case. In Dragon Age: Inquisition, the audience is told that the Eluvians (the elvish word for “mirror” in the Dragon Age universe) are actually portals to a crossroads of sorts; a hub where all Eluvians exit out into, not unlike a metro station or an airport. However, this information is not well known, least of all to the Dalish elves whose ancestors created these portals in the first place. Eluvians are fabled as being evil, housing demons and the like. Yet, for those who seek to rebuild whatever remains of the ancient tools, those people are practically possessed by the desire to do so. Morrigan, a hedgewitch, manages to use one, only to return to the real world wanting to know more, eventually placing herself under the will of an elven god just so she can have more knowledge of how they work. 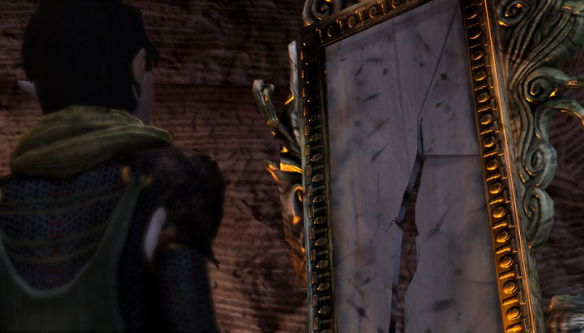 Merrill, a Dalish elf formerly of the Sabrae Clan, also becomes possessed by this need for knowledge. Her friends were destroyed by the Eluvian they found, yet in trying to regain this small part of her culture and find out what actually happened to her friends, Merrill loses everything: the mirror becomes so important that she would rather be exiled from her clan than halt her research; she would rather risk the destruction of her family than recognize that there could be a reason why the Eluvians were lost to time. Both Morrigan and Merrill’s desires brought forth by the mirror presented worlds that seemed ideal, so much so that even when faced with the possible negative impacts of their actions, they weren’t willing to accept the repercussions until they actually happened. The mirror was too strong.

All is not lost, though! Media has luckily decided that we don’t need to be slaves to our desires all the time. Take Labyrinth, for example. During her time in Jareth’s labyrinth Sarah is repeatedly pushed to her physical limit, but arguably the most dangerous moment comes when she is allowed to live her desires. Trapped in a magical bubble, Sarah is allowed to live as an adult, dancing in pretty dresses and being noticed by the very attractive Jareth. Yet though this fantasy is mirroring her desires, she recognizes it’s only a fantasy. By breaking the mirror, she frees herself. She overcomes her desires by breaking through the mirror. She doesn’t deny them or forget about them, she instead gains the knowledge that she can achieve those desires, but only through hard work. And for her, that hard work requires saving her baby brother from Jareth’s clutches and escaping the labyrinth.

I’ve had a couple fantasies about this, myself. NGL.

Human desires are a powerful driving force, but they’re also an extremely dangerous thing. While magical mirrors don’t actively use these desires as a way to spite humanity, all too often we’re ready to give up too much in the face of an easily achieved result—a result these mirrors are all too eager to show us, or at least give the sense that it’s “just a little more” until we get those results. We will never stop desiring these easy answers (hard work kind of sucks), yet at the same time we will also never stop fearing what a lack of hard work can wreak. This is the cautionary tale mirrors have carried for ages, and the reason why they’ll never disappear from our media in these magical ways.