December 8th was Pansexual Pride Day and as a proud pansexual myself, I wanted to mark the occasion by talking about pansexuality in geekdom. Except… there isn’t much pansexual representation in geekdom, and I’ve already written about the few characters who have been identified as pansexual. Gay and lesbian characters are still barely represented in all of pop culture, and bisexual and transgender characters rarely, if ever, grace our sphere of geekdom. So while it’s not much of a surprise that other lesser known sexualities are not represented, it’s always nice to dream of a day when more queer characters will exist in our media. Today, I decided to pick five characters that I would love to see come out as pansexual. Just to clarify, these are characters I wish would end up being pansexual. This does not mean that I think they necessarily are pansexual or are presented as pansexual.

Without further ado, here, in no particular order, are five characters I wish were pansexual.

Let’s be honest, Storm is one of the most boss of all the X-Men characters. She is also a heavy hitter when it comes to representation, as she is probably one of the most well known and iconic Black female superheroes in comics. Because she is such a well-known and beloved character, I would love to see her come out as pansexual. My opinion on representation is “go big or go home”. Having such a prominent character come out might be risky, but it would also be really cool and a huge show of support for the pansexual community and the queer community overall. Furthermore, so, so, so many queer characters are white. Even in our fanfiction most of the characters written to be LGBTQ+ are white, so it would be excellent to see some of the first pansexual characters be people of color.

My desire to see Kamala Khan be written as pansexual comes from a much more personal place. Basically, Kamala is the character that I would have liked to have when I was growing up. A quirky, nerdy fangirl, with strong religious and moral convictions: that was me. Now obviously I am neither Muslim nor a person of color, but that doesn’t mean I’m unable to see myself in Kamala. There is a severe lack of representation when it comes to queer religious characters in general. It would awesome to see Kamala explore what it means to be both Muslim and pansexual.

I would give my left buttcheek for Scott McCall to be a queer character. Any queer sexual orientation would be fine, but if Scott McCall was pansexual I would sing from the mountaintops and bake Jeff Davis cookies. The few pansexual characters who exist are often portrayed as sexual deviants who would sleep with anyone or anything. Scott as a pansexual would thoroughly reject that stereotype, because while he is sexy and certainly enjoys having sex, he would very clearly break the mold. He’s a capable leader—a True Alpha—and a good friend. 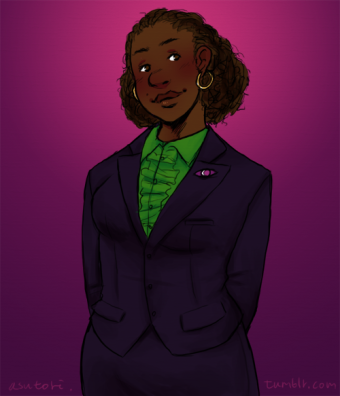 Mayor Dana Cardinal, former Intern Dana (or possibly former Intern Dana’s double) spent a year trapped in a mysterious desert other world. Eventually she brought together angels and mysterious masked warriors to save her home town of Night Vale from the evil Smiling God; after accomplishing these heroic acts, she was elected as Mayor of Night Vale. Pansexual people, and queer people in general, don’t have much representation in politics. A character like Dana coming out as pansexual would not only give queer audiences hope of a world where queer people have more power within the government, but we would also be showing our support for the few who are. On that note, a pansexual Dana is also my way of honoring Mary Gonzalez, the first openly pansexual legislator in the United States.

Clementine from the The Walking Dead video game is an excellent young female character. She shows a remarkable amount of maturity, humor, strength, and intelligence for a girl her age who is also surviving a zombie apocalypse. There are very few coming of age stories for women in general, but seeing a coming of age story about a young pansexual woman of color is basically near impossible. Over the past couple of seasons we have been watching Clementine grow up, and it would be really interesting to see her begin to realize her sexuality as she grows up, especially in a world that has pretty much gone mad. We see so many stories like these for straight characters. It would be awesome to see them for queer characters as well.

So there are the five characters that I wish would come out as pansexual. Consider this my belated Pansexual Pride Day gift to you. Until next year!