Quick: who are Batman’s enemies?

I’m certain that many of you reading this can rattle off a long number of names from his rogues gallery. I’m sure that this list includes the Joker, Two Face, Clayface, Bane, Poison Ivy, and Harley Quinn. I’m not the world’s biggest Batfan and so my Batcollection of Batcomics is fair to middling at best, but I can safely tell you who Batman is fighting: criminals. 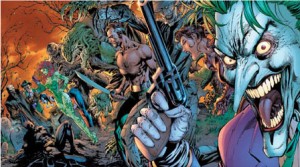 Right? Of course Batman is fighting criminals, super and non-super, from Calendar Man (yes) to Darkseid. My goal here is not to state the obvious but rather what is ignored: Batman does not fight crime. He does things like fight a whole cities’ worth of gangs, but he doesn’t fight the root causes of crime. Batman is obviously not a sworn enemy of income inequality; he does not put on a cape and go toe-to-toe with the misallocation of resources, the troubling legacy of international colonialism, or the profit-driven culture which encourages the building of sweatshops or the abuse of labor rights.

Oftentimes, Batman fights supervillains, petty criminals, or the amusingly written individuals who are somewhere in between. The petty criminals are the most troubling set of Batman’s enemies. Crime is complex. It has all sorts of elements and causes and correlations. Crime, particularly violent crime, correlates with population density (maybe), it correlates with poverty, single-parent households, race, and maleness. It should not be reduced to which evildoer most needs punching. 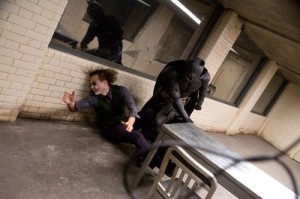 Batman makes no genuine, sustained attempt to combat these issues. Batman solves mysteries while beating up criminals. Bruce Wayne does, sort of, through the Thomas and Martha Wayne Foundations. But, Batman and Bruce Wayne are functionally separate entities with a shared secret, which is different than say, Iron Man. Furthermore, Bruce Wayne’s philanthropy doesn’t define any part of the whole Batman oeuvre. It also does not change that donning a suit to hide your identity from the law enforcement bureaucracy while beating up mentally ill criminals on the street at night is a Randian fantasy if ever there were one.

I’d like to make three notes here: 1) it is important to remember that “crime” is socially constructed, but we can agree that some majority of violent crimes are bad. 2) Batman is not unique in this oversight. Name the last superhero movie you saw in which a superhero did battle with some structural inequality. 3) It is not Batman’s fault.

As for my first note, I mean that the law is a social contract, and thus what is and isn’t crime is determined by implicit and explicit social agreement, which the government is then empowered to enforce à la Weber or Hobbes. While this contract is often defined in troubling, biased ways, there is some room for agreement. Let us, for the purposes of argument, assume that most assaults, robberies, and murders are bad in the sense that they are unproductive for human improvement within a society.

My second note, that Batman is not unique in this, is self-evident. Iron Man, especially in the modern imagination granted by the MCU, talks about changing policy and reality for both energy and national security, but is seen to spend most of his time fighting Mickey Rourke or Ben Kingsley. Captain America fights against Hydra in Captain America: The Winter Soldier and therefore fights an allegory for government overreach and invasion of privacy, but the ultimate enemy is still Hydra.

Number three is the most important. It’s not their fault that they prefer to fight against force majeure than say, the troubling nature of the modern city; they’re (mostly) unequipped for it. More relevantly, these characters don’t make their own decisions. They are, ultimately, characters in the closest thing our modern, secular culture has to an organized mythology. Mythologies are reflective of the culture in which they exist; they serve to justify and uphold certain practices and values. Comic book heroes, like gods and culture heroes, do battle with the things we dislike or regard as antithetical to our values.

If our heroes don’t fight or investigate the structural origins of our society’s ills, it is because we do not want them to. Before you say, “but I do,” understand that I’m talking about a larger “we” that consumes art and pays for more art to be made. Some part of this is innocent. It is probably harder to write a compelling story in which the enemy is willful ignorance of the West’s colonial history, or the devil-may-care industrialization of our world. Captain Planet did it, but it ended up campy, if popular, and still was forced to personify those evils in the form of supervillains who were just so goshdarn dedicated to littering, $200 fine be damned.

There is, however, a side to this that is not so innocent. Much of the reason our superheroes function this way is that we are cowardly. That’s a charged statement, I know, but consider that the current state of superhero comics and movies is a loss from earlier eras. This is especially true of superhero films, which possess a much narrower set of iterations of any given superhero. It is rather a winnowing of our heroes to the most rugged individualist bits. The forties were not some magical time when men were classier and women knew their place, yet it’s possible that Golden Age Superman was a much more efficient crusader for justice than our modern Superman. Superman once fought the enemies of the Depression-era common man, aptly understood by his creators, Joe Shuster and Jerry Siegel, to include some bankers and capitalists. Les Daniels’ 1999 Superman: The Golden Age describes this in a way that doesn’t quite reach a modern critique of capitalism, but I don’t think Shuster and Siegel would have predicted the Second Gilded Age we’re living in. 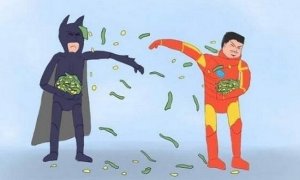 I sincerely believe that we prefer to to think of evil as either external to our society, like Darkseid or the Super Skrull, or as the result of individual madness or ambition. This is easier, neater. When the possibility that our culture is to blame, in part, for some evil, it is typically that people are either weak-willed or overly ready to trade freedom for security. It’s never a question that perhaps it is problematic that the “American dream is financial, not ethical”. Of course not, that would make the notion of turning over a whole city’s or country’s problems to an egomaniacal billionaire with PTSD—yes, both of them—seem a little suspect.

Superheroes inhabit worlds of nonstop evil and crime. They are constantly fighting, often in very prescribed, phallic ways. If they do not fight to solve or reduce crime, just to stop the crime in front of them, their strategy, and therefore our mythology, is deficient. Mythologizing the fighting of crime without analyzing its cause oversimplifies criminality to a question of malformed free will. Mythologizing the fighting evil without strategic effort to stem the tide of evil reduces that fight to fantasies of either power and revenge. I would, again, characterize it as singularly Randian.

This is not just a question of approach, it is also one of representation. When they go to make comics into movies, to no one’s surprise, they have overwhelmingly left out female characters, especially in lead roles. Let’s take Wonder Woman, because her example is easy. She is only two or three years more recent (1941) than Batman or Superman, but has many fewer lead roles. Why is that important? Because the failure to represent those different approaches, especially those traditionally characterized as feminine, is stunting our collective imagination. As Gail Simone so eloquently put it in Wonder Woman Vol. 3:

I say all of this not to come crashing down on superheroes as a storytelling method, but to question the reasons as to why they so routinely fit an entertaining but staid mold which endorses the same hackneyed method of problem solving. Art can be the site of critique too subversive or troubling for other methods of discourse. When that potential goes unused, or underused, it quickly becomes propaganda, and American comics have a long history as such. It’s not that propaganda is never useful. Much to the contrary, it is almost always useful. Art is always speaking, whether the creator intended it to or not, and we would do well to ask ourselves what we are hearing when it does.