Holiday Pro Tip: if you happen to celebrate Christmas and if you happen to be emotionally invested in dweeby young adult Loki, I sincerely hope you have not read Agent of Asgard #9. You have trusted me thus far in spite of my clearly being a no-good scoundrel, so just take my word for it: don’t read the issue and don’t read this review of the issue until you are ready to have a dim, distracting miasma of feels shadowing your festivities. Suffice to say that Loki got everything ey always wanted, and it was terrible and tragic and heartbreaking.

Eir heart grew three sizes that day… and then it was pulverized and stomped on repeatedly and burned in a fire.

Because this series is still overlapping with the Marvel event Axis, a lot of stuff happened in the Axis storyline that had to be hastily explained at the beginning of this issue. The relevant highlights are as follows: all the good guys have turned evil, all the baddies have turned heroic, and Loki is caught somewhere in the middle, eir scheming nature conflicting with a genuine desire for reform. At the end of issue 8, Loki had just confronted Evil Thor, but in order to keep Agent of Asgard on the Axis timeline, that confrontation was awkwardly interrupted by Spider-Man and Loki was whisked off to Avengers Mansion.

At the urging of the newly-heroic Amora, Loki helps to stop Lorelei and Sigurd from robbing a bank and—in spite of eir hesitation to turn on eir former allies—delivers them to brutal, unyielding Asgardian justice. Though Odin punishes Sigurd and Lorelei harshly, he has some equally harsh words for Loki about eir willingness to betray eir one-time companions and eir damaging attitude of self-righteousness.

With Odin’s warning in mind, Loki gains a bit more clarity about how the inversion has truly affected em. Determined to set things right, Loki lures a furious, verbally abusive Evil Thor back to the moon where he left Mjolnir. When Thor pursues, Loki finds to his astonishment that ey is able to lift the hammer, and in doing so gains Thor’s power. Loki defeats Thor with his own weapon, and just as ey is insisting to Thor that even with the inversion magic, both of them are still in control of their own destiny, the inversion magic is dissipated.

Thor collapses, and when he comes to he has no memory of anything that has happened, but Loki does. When Loki tries to explain, Thor dismisses the story as a lie, scolding Loki and saying “there are some stories none will ever believe.”

For most of their long and sordid relationship, Loki’s ultimate goal has been to defeat Thor, and ever since Mjolnir was created, Loki has coveted it. Finally Loki has achieved this, not even by deceit but rightly and by his own virtues, only to have the whole thing taken from him by Thor’s distrust. The most incredible and heartbreaking part of this whole issue is that—while all the other heroes and villains had been fundamentally altered by the inversion magic—Loki remained effectively emself. Ey was at a moral tipping point to begin with, eir negative impulses at a tentative balance with eir positive ones, and it seems therefore that the inversion magic did nothing other than to give Loki an inflated sense of importance, a mistake that ey realized after a scolding from Odin. 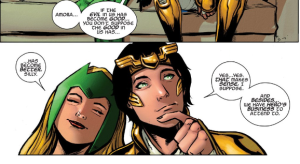 So close and yet so far.

Loki, after all, remembered the whole series of events, whereas Thor—clearly affected by the magic—did not. Throughout the Axis arc, Loki was the only character who expressed moments of self-awareness and clarity, asking repeatedly what the magic would do to people whose morals were not absolutely polarized. Although ey assumes the magic has made em “good,” Loki explains several times that ey still has spiteful urges. When Amora asks if ey really intended to fight Thor, ey responds, “No, but only because deep down I wanted to.” At the end of the issue, when the magic is dissipated, Loki does not seem to suddenly become unworthy of Mjolnir. It does not drag em to the ground, ey simply drops it in alarm and does not attempt to pick it back up.

Loki has already suffered a number of disheartening setbacks on his road to decency, and Thor’s refusal to believe that ey ever could have been worthy of Mjolnir is no small blow. I am waiting anxiously for the moment when Loki snaps, abandons eir attempts at reform, and sets emself on a path that will lead to Evil Future Loki, a fate that ey knows is still likely. The only person still fully on eir side is Verity, and whether her friendship will be enough to save em from emself is anyone’s guess.