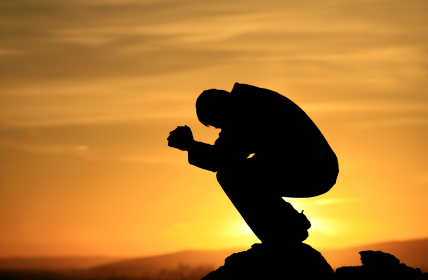 I work at a church, and right now I’m spending a lot of time trying to teach kids about sin, specifically about repentance and forgiveness. These kids are old enough to have a pretty good handle on telling the difference between right and wrong, but getting them to say “I forgive you” and mean it is a different story. Getting yourself right with God (or the Gods) and your fellow human beings are big parts of many religions, and huge plot points of many of our most popular stories.

In early Christianity, repenting for your sins was a big deal. You would spend months or years doing all kinds of uncomfortable acts of penance to show God and the community just how sorry you were and just how committed you were to not doing whatever it was you did again. The idea that you spend the rest of your life (or at least, a long time with considerable effort) paying for something that you did is a common theme in geeky stories. Harry Potter’s Severus Snape is one example. Snape is an up-and-coming Death Eater who accidentally hands over his childhood crush to be killed by his master. He spends almost twenty years trying to make up for it by playing double agent for Dumbledore. Yet he never really shows much regret for his life as a Death Eater, but for the single act of betrayal leading to Lily Potter’s death. Tony Stark is another example. In the Marvel Cinematic Universe, the self-described genius-billionaire-playboy-philanthropist realizes his family’s tech company is selling weapons to terrorists (having been captured by insurgents himself), and becomes the hero Iron Man while trying to make amends for the destruction caused by his company.

Some authors take the suffering a step further and kill off their evil characters the moment they repent. In Star Wars, Anakin Skywalker becomes the evil Darth Vader. In Return of the Jedi, he saves Luke’s life, destroying his life-support system in the process. He spends all of what, five minutes as a changed man before he dies. Snape almost fits this role, but he doesn’t quite die to save anyone or for a cause. Voldemort kills Snape because he thinks Snape is a threat to his own power. On the other hand, Wormtail quite literally plays out this idea. The moment Wormtail decides not to kill Harry, his magical silver hand (a gift from Voldemort) turns on him and chokes him to death. 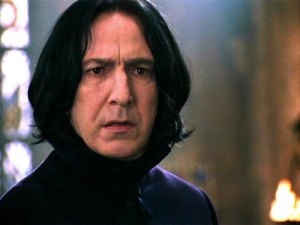 Snape isn’t really sorry for what he did, he’s sorry that it was Lily who died. Dumbledore manipulates Snape’s feelings to get him to be his double agent, but never truly absolves Snape of wrongdoing. Snape’s life as a double agent is a kind of penance, but it’s ineffective because it never results in his betrayal being forgiven. It’s only when Snape is bleeding to death from a snake bite that he tells Harry the truth about his motivations for what he did. And Harry, as Lily’s son, is truly the only person who can absolve him. So in the story, Snape’s key sin wasn’t being a racist Death Eater, it was leading Lily to her death. He’s forgiven (by Harry) for his role in her death. Dumbledore would have been the one to forgive Snape for being a Death Eater, but he never really does, because he never offers him the kind of safety and security he offers Draco. Snape is a complex character who commits multiple sins, only seeks forgiveness for some of them, and is only truly absolved of some of them. At the end of the day, he never makes a full transition from “bad guy” to “good guy”.

Anakin Skywalker, on the other hand, makes a clearer transformation. Anakin succumbs to temptations of fear, anger, and power, and becomes the Sith Lord Darth Vader. Emperor Palpatine is basically the epitome of evil, and Vader is his right-hand-man. Vader’s son Luke is the only one who really believes that his father can be redeemed. When Luke and Vader have their big showdown lightsaber battle, Luke defeats Vader but refuses to kill him, as would be his right by the Sith code. In sparing his father’s life, Luke not only gives his father yet another chance at redemption, but denies Palpatine’s offer to join the Dark Side of the Force. This enrages Palpatine, and when he attempts to kill Luke, Vader intervenes. Saving Luke’s life and killing Palpatine destroys Vader’s life support system, mortally wounding him. This one act reconciles Anakin with both his son and the Force (the universe’s closest thing to a deity). His act of sacrificial love restores his relationship with his son (albeit for only a few moments before his death), and fulfills the ancient prophesy that Anakin would restore balance to the world by destroying the Sith Order. When we see Anakin become one with the Force, it’s confirmation that the universe accepts his sacrifice, and balance really has been restored. He really does become a “good guy” in the end.

It’s pretty clear that in geek culture, if you’re a bad guy and want to repent, you’re either going to suffer a lot, die, or both. Many religions tell us that seeking forgiveness means that you’ll live. Even if that means you’ll have a happy life in the afterlife, it’s some kind of “life”, all the same. We usually don’t get that implication with our characters. There are a few exceptions; we see Anakin become one with the Force, like Obi Wan, Yoda, and other Jedi heroes. But he doesn’t get to do anything else in the story. If anything, showing Anakin one with the force just serves to confirm to the audience that he really did repent. We don’t even know if Snape fully repents of all of his sins, and all he gets for an epilogue is the implication that Harry might have worked to clean up Snape’s reputation (he did name his son after him, after all). There’s nothing in the story that says that anyone besides Harry (and those close to him) ever learned the truth about Snape. So why would any of our characters want to repent, if they don’t get rewarded for it?

Just these guys waiting for you. That’s it. (image via thehdwall)

Well, first, our stories are limited. If a writer does their job right, we’re really only getting a window into an interesting part of the character’s life. We skip the boring parts; most people don’t really want to watch a movie about what happened to Frodo after he comes back from destroying the ring, living a quiet life in Hobbiton. Problems are what make stories interesting, and if a villain is causing most of the problems, there’s no reason to keep telling the story once the problem’s solved.

Second, we want our stories to speak to our experiences. We all have a conscience (well, most of us do) and we struggle with following our conscience. Seeing a character struggle with their conscience and have a change of heart demonstrates an incredibly human experience. Few, if any, other creatures have a conscience. It’s a fundamental part of our identity. A villain trying to turn into a hero makes for a much more interesting character than a villain without a conscience. A villain without a conscience might as well be swapped out for a malevolent force, or something equally as impersonal. A character’s journey of redemption is what we want to watch; what they do when that journey ends doesn’t matter so much.

2 thoughts on “Oh, My Pop Culture Religion: When Villains Repent”