Well, Agent Carter is finally back after a two week break, and right now, I’m so in love with both the story and Peggy that I’m not even sure I can bring myself to criticize any of its faults. Of course, that’s if it has faults. My love may have blinded me to them. Regardless, there was nothing about this episode that I hated. I have loved every minute of Agent Carter since it first aired, and I can only hope to keep loving it as the story progresses.

This week we had yet another amazing episode. Howard Stark comes back to town, Peggy’s coworkers continue to be assholes, Howard Stark is an asshole, and Peggy’s landlord is also a pretty reprehensible person. The SSR discovers a conspiracy theory in the works involving Howard, Peggy’s new neighbor is doing mysterious things, and Stan Lee shows up to make a cameo appearance. All in all, it was a great episode.

The omnipotent god of the Marvel Universe, everyone.

In “The Blitzkrieg Button” Peggy continues to help Howard clear his name, but not everything is well in their friendship. Howard unexpectedly shows back up in New York City because he needs to get back one of his inventions that the SSR confiscated in the last episode. He tells Peggy that the device in question could permanently shut down the power to the whole city and he’s worried that the government will use it for the wrong reasons. As this is a piece of equipment with economically devastating consequences, Peggy agrees to steal it back for him.

However, Peggy notices that both Howard and Jarvis seem to be hiding something from her—Jarvis rubs his ear when he lies. Acting upon her suspicions, Peggy purposefully activates the device’s switch when she steals it. Instead of being a weapon, it turns out that it’s storing a vial of Steve Roger’s blood. Howard wanted it back because Steve’s blood could be used to treat numerous diseases and save millions of lives. Peggy responds by punching him. She tells Howard that she is committed to Captain America and what he stood for, and he did not stand for lining Howard’s pockets with more money.

While all that’s going on, Peggy’s boss travels to Germany to talk to a convicted Nazi about a massacre that happened back during the war. The Nazi tells him that Germany was not responsible for what happened—by the time the Nazis arrived at the scene of the crime, the victims were already dead, mutilated, and thrown into a pile. And unfortunately for Howard, a flight schedule showing him returning to America the day after ties him to the crime. It looks like clearing his name is going to be all the harder now.

All in all, this episode was fantastic, and we had some really good character-driven moments. I love Peggy’s relationship with both Howard and Jarvis, and their fight taught us a lot more about both their characters, why Peggy’s helping him, and why they often disagree with each other. Howard admits to Peggy that the world is an awful, oppressive place, depending on who you are, how much money you have, your gender, and everything else. Howard came from nothing, and he only got to where he is by lying to people, and that’s why dishonesty comes so naturally to him. While we can see where he’s coming from and understand his motives, Peggy in no way takes those as an excuse for lying to her about Steve’s blood, and she even kicks him out of her apartment and tells him she doesn’t want to see him again. During the duration of Jarvis’s employment to Howard, he got used to lying for the man and apologizing to people for him. But this time, he’s upset about tricking Peggy, and his dishonesty toward her stings him more than it normally would.

Peggy’s office is still reeling over the loss of Krzeminski who was murdered last episode, and while their boss is away in Germany, everyone—except the ladies, meaning just Peggy in this case—is working overtime to find his killer. One of them, Jack Thompson, asks Peggy why she works for the SSR, since no one respects her and none of them will due to her gender. Peggy flippantly answers that it’s for the thrill of getting everyone their lunches, but it is still a really good question. And of course, even though her coworker recognizes the misogyny she is subjected to, he’s still one of the people instigating it by giving her menial tasks and refusing to treat her as an equal. We also get a few good scenes between him and Daniel Sousa. 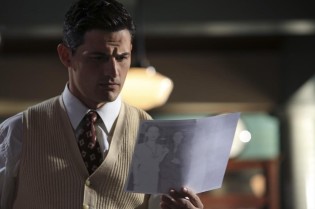 I suspect Sousa’s going to be the first one to figure out what Peggy’s been up to.

Sousa goes back to the docks to check for fingerprints on the phone Jarvis used to make an anonymous call. While there, he finds a witness, and even though he is the only person on the case who found a potential lead, Thompson and the others still mock and belittle him. Sousa attempts to empathize with the witness in order to get the information he needs, and in the process he reveals how people treat him because of his disability and how he feels about it. And of course, Thompson, though recognizing what Sousa’s going through, still mocks him and treats him as less than equal, just like he does with Peggy.

One of the reasons I love this show so much is how well it does with the minority characters it features, and showing all the subtle ways different people are oppressed. Certain characters, like Peggy, have learned to manipulate other people via their prejudices. Though Peggy longs for respect, one of the reasons she can get away with helping Howard behind the SSR’s back is because she’s underestimated, and she knows it.

We can also see this between her and her landlord, Miriam Fry, who is possibly my least favorite character in the whole show. The apartment complex Peggy lives in has very strict rules based on outdated, sexist beliefs—women must be “pure” and “innocent” until marriage, so no men are allowed above the first floor. When one of the women was caught with her boyfriend last episode, Fry kicked her out (and slut-shames her in the process). This episode, Fry continues showing us her internalized misogyny. She’s worried about Peggy because Peggy keeps odd hours, and she even tells Peggy that she works at the apartment to keep young women virtuous, because women Peggy’s age, paraphrasing, “cannot control themselves and need someone to do it for them”.

I think the most interesting part of the episode, however, was an assassin’s thwarted attempt to murder Peggy. A man breaks into the apartment complex, and right before entering Peggy’s room, one of her neighbors confronts him. This woman, Dottie Underwood, manages to disarm and kill him all in the course of a couple seconds, using some awesome Black Widow-like moves. Right away, I want to assume that she’s evil, but as she may have just saved Peggy’s life, I’m hoping instead that the she’s a good guy. Why she’s following Peggy around right now, though, remains a mystery, and it’s something I certainly want to learn more about in future episodes. One possible theory is that Dottie is a Red Room spy, like Black Widow used to be. There’s a lot to indicate this. When Fry introduces Dottie to us, she says Dottie hopes to be a ballerina, and the previews for the next episode do nothing to dissuade this theory. Peggy and the Howling Commandos are heading to Russia, and oh my God, I can’t wait to find out what happens next.