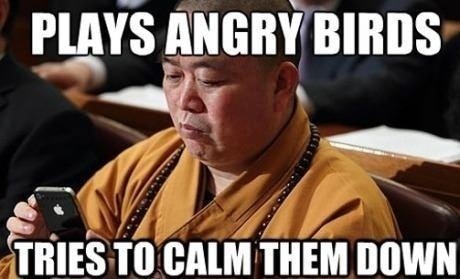 Geek culture monks tend to fall into two major categories: Eastern monks and Western monks. In real life, both kinds of monasticism (monk lifestyle) have a lot of similarities, as well as distinctive qualities. They take vows to live a virtuous and simple lifestyle. They spend a lot of time praying and meditating, but most also spend time doing some kind of manual work. If I had to pick one word to describe the life of a monk, it would be “disciplined”. Physical and spiritual discipline rule the life of a monk. Christian monks take vows of poverty, chastity, and obedience to their superiors. Some of them may become priests, but not always. Unlike friars, most Christian monks largely avoid interacting with society. Most do some kind of work. Sometimes this is physical (the monastery near me makes wine, fruitcake, and binds books), and sometimes it’s more spiritual (authoring works of theology). While Christian monasticism took root soon after the death of Christ, Buddhist monasticism is even older. Buddhist monks lead a similarly disciplined lifestyle, but with more variation. Some live a life of celibacy, others can get married. Sometimes boys are allowed to become novices. Many are vegetarians. Buddhist monks respect their superiors, but don’t take the vows of obedience that Christian monks do. While a Christian monk’s lifestyle is how he worships God, a Buddhist monk’s lifestyle helps him attain enlightenment, fully overcoming attachments and ignorance.

There seem to be two major monk stereotypes in geek culture. The first is the Warrior Monk. These monks are totally badass killing machines, manifesting as either martial arts masters or sword-wielding crusaders. Sometimes the narrative tries to justify why the monk is a warrior. Martial arts is a great way to practice discipline and has roots in the real life Shaolin Monastery. Soldier monks find their roots in the papally-sanctioned holy wars of the Crusades, intended to defend the Holy Land against Islamic conquest. The crusader monk usually has a strong code of ethics to defend the innocent. It’s more or less the male ideal created by romantic notions of chivalry.

You’d think that each style would be limited to the East or the West, but more often than not, writers play fast and loose with the trope. We see a clear separation between East and West in the Doctor Who episode “Tooth and Claw.” In it, the Doctor and Rose travel to 19th century Scotland and meet Queen Victoria. Everyone spends the night at Torchwood Estate, which turns out to be captured by monks. At first the monks look like Christian monks with long dark robes, but they take those off to reveal bright orange Buddhist robes, and start fighting using the martial arts. Without getting into how ridiculous it is that a bunch of Buddhist monks are in 19th century Scotland (this is Doctor Who, after all), there’s a clear distinction. The monks had to “transform” from Western monks to Eastern monks before they could start using an imaginary version of kung-fu. 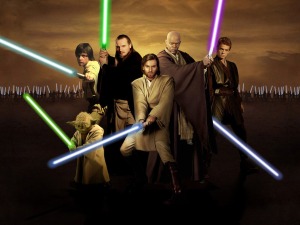 On the other hand, sometimes writers take elements from both parts of the world. The Jedi Knights of Star Wars are clearly warrior monks, but their philosophy is much more Eastern than Western. Jedi learn to fight with lightsabers as a crusader monk may learn to use a sword. But their philosophy is centered around the mysterious Force. Following the light side of the Force meant the Jedi fosters virtues of selflessness, compassion, and seeks enlightenment. Attachments can lead one to the dark side of the Force—full of anger, fear, and jealousy. It’s much more similar to Buddhism than Christian ideas about God. 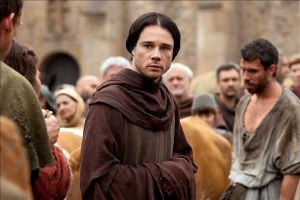 The second major trope is the “Dirty Old Monk”. It’s like we took the image of the gross, sexually perverted old man and gave him some religion. Usually the character is supposed to be funny in anime and manga, especially if Mikos, aka Shinto shrine maidens, are involved. But in Western geekdom, more often than not, the Dirty Old Monk is meant to be a disgusting hypocrite. Ken Follett’s Pillars of the Earth and World Without End follow multiple generations of residents of the fictional English town of Kingsbridge. The town is kept alive through the work of the priory and community of monks who live there. We meet multiple generations of evil, sexually frustrated monks (living alongside virtuous ones). In World Without End, the monk Philemon and his cronies spy on other characters in “compromising positions”, uses the information against them, steals, and probably has an unrequited crush on another character. Philemon primarily functions as an ambitious villain in the monastic community, using manipulation, gossip, and secrets with the hopes of getting a powerful position in the community. His personal romantic feelings don’t endear him to the reader, they’re meant to make us despise him more.

These two tropes tell us a lot about our cultural perceptions of masculinity. We praise men for being proficient warriors and expect them to be aggressive. Warrior monks are usually heroes, strong men with good moral codes trying to protect the innocent. And when they’re portrayed as evil, martial arts master villains, they’re still really cool. The real life of peace, meditation, and asceticism doesn’t jive with the image of the awesome warrior. When a story’s narrative does acknowledge it, it’s usually in passing as a sort of justification for their fighting abilities. The monk supposedly lives a disciplined life so that he can be a great warrior, when in fact it’s the other way around. If a monk does become a proficient warrior, it’s a practice that serves his pursuit of a disciplined lifestyle or as a way to live out his calling to worship his God and protect others from evil.

We pay lip service to those virtues, but we aren’t truly interested in encouraging people to live them out. Discipline is boring, especially in a highly consumerist Western society. We also expect these monks to be to sexually aggressive and have an insatiable lust. In this case, the kind of discipline required to live a life of celibacy is disregarded as virtually impossible for these men (without some kind of heroic effort, of course). So it’s either funny that he tries, or a sign of his moral corruption. In a lot of ways this makes sense; there are plenty of vowed religious men (including a handful of popes) throughout history who flagrantly violated their vows of celibacy, not to mention all the other crap they’ve done in the name of God.

We’re left with this idea that the masculine ideal is a powerful, lusty, aggressive man capable of violence. It doesn’t match the real image of the monk—a man who chooses to live in community, pursuing discipline and virtues, in a largely peaceful existence. What does seem to fit with the ideals of the monk is another masculine stereotype that’s gaining traction in the geeky world. This is the nerdy, smart, nice guy with a slim build. You might think of Giles from Buffy the Vampire Slayer, Harry Potter from Harry Potter, or the Doctor from Doctor Who. These are men who use their brains over brawn and win. Their virtues are what make the audience fall in love with them. They still exhibit sexual prowess, but that’s because the women come to them (no need to be sexually aggressive). This has the potential to be a great counter-balance to the old masculine ideal, and could be totally supported by some realistic depictions of monks. Why haven’t we done it yet?

Maybe it’s because all of these new male heroes either lack religion or are openly hostile to it. In the West, religion is still so closely tied with power, particularly male power. So in some ways, religion is a big part of the status quo challenged by this new male ideal. You see this all over the place in Doctor Who under showrunner Steven Moffat. One of the recurring villains is the Church of the Papal Mainframe, with their warrior monks. The Doctor uses his cleverness and science to trample over the Church’s plans again and again. Furthermore, both masculine ideals are still making a strong connection between being a “real man” and “getting the girl”—an incredibly heteronormative message. It’s either the hulking, aggressive guys who do mighty deeds and get the girls, or the smart, sensitive guys who do mighty deeds and get the girls. Masculinity seems to have an inherently sexual element to it, or at least that’s what society wants to tell us. 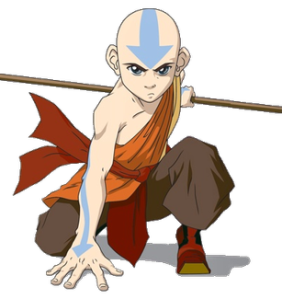 But it doesn’t have to be this way, and one show already did a great job of giving us positive portrayals of monasticism: Avatar: The Last Airbender. Our hero Aang was raised in a monastery by a sympathetic guru. His spiritual beliefs are a big part of his life, and he sometimes struggles to incorporate it with the elemental fighting styles he must learn to save the world. At the end of the series, he even begins a romantic relationship with his friend Katara. Aang subverts and blends both kinds of monastic tropes. He learns to deal with his crush on Katara in a healthy way, and at one point must learn to let it go so he can pursue spiritual enlightenment. He learns to fight in order to maintain balance in the world, protect people, and in general uses it in a virtuous way. It’s intrinsically tied to his religious beliefs. Aang subverts the harmful elements of two categories of this trope, while still incorporating their positive elements.

It’s not a complete or perfect example of monasticism, but it’s a good start. Aang isn’t celibate, and celibacy is an important component to most forms of monasticism. Celibacy directly challenges society’s hypersexualized version of masculinity. In many ways, monks dare to tell us that you can be a real man without sex or romance. Monasticism tells us that there can be more important things in a man’s life than impressing a woman and getting her to have sex with him. Sex and violence aren’t always opposed to a monastic life, even in the real world, if they’re properly disciplined. Writers should create monks who are more faithful to what monks are really like, and they don’t have to compromise engaging storytelling to do it.