I’ve been feeling a little nostalgic lately, perhaps in part because I’ve been trying to remember a time where the world wasn’t covered in snow. Oh, those were the good old days. What’s better for these cold parts of winter, though, than curling up and re-playing a good RPG? So, riding on the coat-tails of this North Eastern bullshit blizzard and the not-bullshit-at-all Femslash February, I managed to discover a fic that delivered on the warm feelings from Mass Effect, a series near and dear to my heart, while not ignoring the consequences of a galaxy-wide threat that almost destroyed civilization.

Maybe I’m stretching a little bit: I know Mass Effect (2007) isn’t exactly old enough to be considered “nostalgic”, and this fic stems from the last game in the series, which came out in 2012, which makes it even less so. Still, The Good Shepard by Wifeofbath invokes these feelings of nostalgia by the sense of home it has in its tone. However, home isn’t always free of conflicts.

The Good Shepard follows Comm Specialist Samantha Traynor after the events of Mass Effect 3—the looming threat now destroyed and a relative peace settles over the galaxy as its inhabitants try to rebuild what they’ve lost. Feeling a certain sense of loss after Commander Shepard (the quote-unquote savior of the galaxy) all but vanishes, Traynor is devoted to finding her beloved Commander. The Specialist manages to find her among the ruins of a city doing what Shepard has always done: saving people. This time, though, it’s on a much smaller scale; running a shelter for those who lost their homes during the assault on Earth. Furthermore, it’s done under a completely different name. No longer is Traynor’s love going by Jane Shepard, but Brie Slater, and Brie Slater is too busy with her new life to dig up the ghosts of her old one.

Full disclosure on my part, I love happy endings. Even in a universe where happiness is nigh unobtainable, I will still always headcanon that everyone gets married and lives happily ever after. Yet what draws me to this fic more than anything else is that it’s not happy. Not right away, but the potential is clearly there. Shepard is tired. For all her saving the galaxy and making people better by supporting them, she is exhausted and wants nothing more than to be normal. To live a life where she isn’t some symbol, but just a person like everyone else. But the fact of the matter is she can’t. No matter how deep Shepard digs herself into normalcy, she can’t let things lie. So when refugees start going missing, Shepard tries to keep herself from getting too involved, and at the same time, her very nature seems to be screaming at her to get involved, that she can once more be the hero these people need. Damned if you do, damned if you don’t.

Brie shook her head, “I’m missing people too. Are you sure they’re not dead? It’s been a terrible winter.”

“Then why can’t I find bodies. More than fifty kids gone and not a single body.”

Sparrow scowled. “This is your city too. What are we going to do about it? This is wrong. It feels…there’s something wrong in this town.”

For a moment Brie wanted to agree. The little bits of Shepard that were still left in her told her she needed to find out what was going on. There were dots. It was her job to connect them. She had to find these people and ensure they were safe. The thought made her feel exhausted. She barely knew where to start. What could a washed up old soldier do to fight whatever evil was trying to invade.

“Stop. I know you were someone in the war… someone important. A general or something down here probably. So why won’t you help?” Sparrow was pleading now. “This guy had a big sister. Her name was Mary. And no one can find her.” She breathed out. “At least I want to know what happened.”

“No.” Sparrows voice was hard now. “Not my people. Not like this.” Sparrow expression changed to disgust. “Get out of here. I don’t want you here.” She turned setting down the child and pointing a finger at Brie. “If you can’t help then fuck you, fuck your shelter. We don’t need your help.” She was practically shouting. “I’ll fucking figure it out myself.”

Brie retreated into the shadows wordlessly.

Though this fic is relationship driven, Wifeofbath makes the genius decision to subtly include the relationship between Traynor and Shepard. Both of them are different people after what they both went through on the Normandy, and it would be strange for both of them to seamlessly slide back into a relationship. Instead, it builds. Traynor supports Shepard in the way she needs—not forcing her Commander back into the spotlight, for one—while Shepard comes to terms with the idea that she doesn’t have to abandon her past completely to move on from it. Additionally, in the background we have a bunch of fantastic original side characters who help Shepard run the shelter. Not only is this thematically poignant, showing that Shepard will always be drawn to make her own families and help people be greater than they think they can be, but all of these characters are interesting and have their own personalities. I honestly see myself caring for them as much as any canon character. 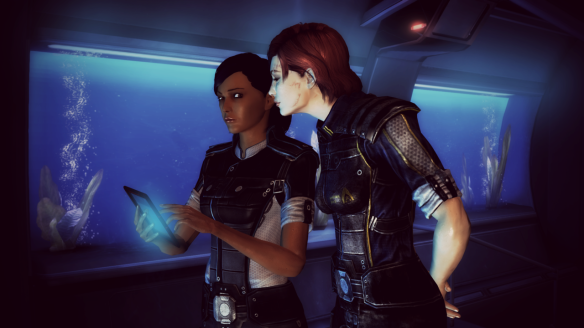 I’ve never played this romance, but obviously I’ll have to try it.
—Art by fishbone76 @ DeviantArt

The Good Shepard is still currently being written, and by the looks of it Wifeofbath seems excited to finish their story. At around 14k words, you’ll spend a good amount of time with the characters and setting, but it won’t cut into your day overmuch. If you get a chance, make sure to check it out at AO3!