Children can have a cruel, absolute sense of justice. Children can kill a monster and feel quite proud of themselves. A girl can look at her brother and believe they’re destined to be a knight and a bard who battle evil. She can believe she’s found the thing she’s been made for. (x) 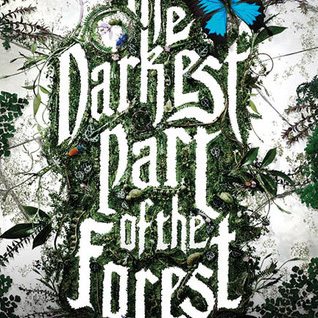 Holly Black is one of my all-time favorite authors, and I was delighted when I heard that her most recent book, The Darkest Part of the Forest, would mark a return to stories about faeries. While her most recent works dealt with organized magical crime (The Curse Workers series) and vampires (The Coldest Girl in Coldtown), I associate her so strongly with faerie tales that I was eager to snatch up this new one when it hit the shelves. Unsurprisingly, it was an exciting and fresh take on old faerie-story themes.

Some spoilers for the novel below!

The Darkest Part of the Forest follows Hazel and her brother Ben, two teens who live in the strange town of Fairfold, Pennsylvania. Fairfold is bizarre because its faerie and human populations live in full awareness of each other. It’s a major tourist destination for people interested in the Folk, who come to buy charms and tokens and especially to ogle the beautiful horned boy asleep in a glass coffin in the forest.

Hazel and Ben Evans grew up in Fairfold, so they know how to avoid trouble with the fae as best they can. (When Fairfoldians do get into a fae mess, it’s usually because they were acting like tourists.) But trouble comes to them nonetheless, or rather, they go to it. From a young age Hazel dreamed of being a knight and Ben a bard, and she used to pick fights with dangerous fae in the forest with Ben’s magical musical gift giving her an assist. She’s since given up her leisure-time assassin-ing, or so she thinks. When the horned boy wakes up, though, and a dangerous spirit of grief threatens to consume Fairfold, her life becomes far more complicated than she could ever imagine. 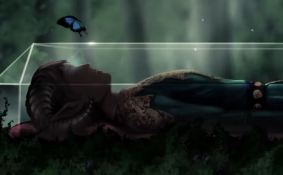 From the book trailer.

Hazel and Ben do both end up in a romantic relationship, but both relationships are actually a refreshing change from the usual YA fare. Hazel ends up with Jack, who, as the changeling brother of a Black boy, grew up, presents, and identifies as Black himself. And Hazel is different any other heroines I’ve encountered in that she’s a bit of a lothario, or whatever the non-perjorative female version of that is. She’s got a reputation for getting around that she encourages; she’d rather have fun kissing boys without delving into a romantic relationship because it’s easier than getting committed. She constantly subverts typical fantasy gender roles both in this way and through her role as the fierce, battle-ready knight of the story. And while her relationship with Jack is framed in conventionally romantic ways, its status as both interracial and, more importantly to the Fairfold townsfolk who object to it, interspecies, sets it apart from other hetero YA pairings.

Ben, it’s established early on, is gay; and while I worried at first that Hazel and Severin, the horned fae prince, would end up together, leaving Ben the sad gay sidekick, it’s Ben and Severin who get the most exciting and suspenseful romance of the story. It’s Ben who gets the dramatic and climactic kiss with the prince, and he even goes to live with Severin at the end of the story. That said, while Holly Black’s stories have consistently featured queer characters from the get-go—even the ones I read in high school nearly ten years ago—I look forward to finally reading a story of hers with a genuine queer protagonist. Ben is briefly a POV character, but Hazel is the main character of the story.

One minor thing that I found jarring at first was that there were just enough subtle references to far-off faerie courts that it eventually became clear that this novel is set in the same universe as Black’s Modern Faerie Tale series (Tithe, Valiant, and Ironside). The relationship between Fairfold and its faerie population is so open and seemed so different from the faerie/human interaction in the original trilogy that it at first seemed strange to have references to the Seelie queen Silarial and to the “upstart knight”—Roiben—on the Unseelie throne. After thinking about it, though, I decided I didn’t really mind; for one thing, given how subtle the references were, they wouldn’t have come off as gimmicky to her newer readers—rather, older readers would recognize them and newer readers just wouldn’t notice. The fae themselves are similar to the ones we’ve already met, And it’s made pretty clear that the faerie situation in Fairfold is unique, which means the worldbuilding in this book doesn’t necessarily contradict the worldbuilding in the other three (where the relationship between mortal and fae worlds was significantly more restricted). 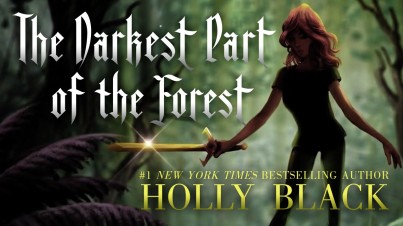 Also from the book trailer.

All in all, I adored this book. It was an excellent and diverse addition to Holly Black’s body of work, and I highly recommend it. If you’ve already picked it up, let me know what you think in the comments; if you haven’t (and I haven’t spoiled you too much), I hope you do!