Well, everyone, it’s that time of year again. Game of Thrones’s fifth season is almost upon us. Beware, book readers. Inconsistencies are coming.

Many of us are already aware that the television show is quickly catching up to where the books are, so it comes as no surprise to me that Game of Thrones is going to start heavily deviating from the source material. We’ve already started learning about things that haven’t even happened in the book yet—such as what the White Walkers are doing with Crastor’s babies. And quite obviously, the show has done things the books haven’t. Certain characters who are alive in the books are dead on the show, other characters have been cut entirely, and then there are the characters on the show who have no book counterpart at all, such as Ros.

Game of Thrones is going to end after the seventh season—and let’s face it, the last book in the series will not be out by 2017—and as such, this season is going to mark some pretty drastic changes from the source material. It’s also going to start killing off characters who aren’t supposed to be dead yet.

Picking up right where the last season left off, Game of Thrones will continue using material from both the fourth and fifth books, which take place congruently. But as I said, many differences are in store for us. For starters, it looks as though Jaime Lannister is heading down to Dorne, when in the books he heads north to Riverrun. So right away I’m worried for him, because in the books, the Kingsguardman who is down in Dorne with Marcella ends up decapitated. I’d say this would bother me, as Jaime is one of my favorite book characters, but the Jaime from the books isn’t a rapist like the Jaime from the show is. 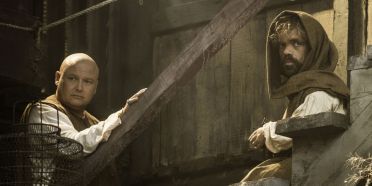 Another difference is that Varys will be joining Tyrion in exile over in Essos. Varys’s whereabouts in the fourth and fifth books are unknown, as he does disappear after Tywin’s murder. However, if he crosses the sea, we never learn about it. He shows up at the end of the fifth book again out of nowhere—so he was probably just hiding in King’s Landing the whole time—to kill off two characters who are getting in the way of his master plan. What that plan is, is yet another thing that hasn’t really be confirmed yet. A lot of us have suspected that Varys is a Targaryen loyalist, and it looks like this season of Game of Thrones is going that route as well. Varys all but says in the trailer that he wants Daenerys on the throne. However, as Varys’s storyline is also changing this season, I suppose I should be worried for his livelihood as well. This is Game of Thrones, after all. No one is safe.

Two characters who more than likely won’t be dying this season, though, are Bran and Hodor, but that’s because they won’t be showing up. The last season saw Bran’s storyline through the books completed, and now there’s really nothing much that he can do this season.

While I’ll be sad at Bran’s absence, the same won’t be true for other characters. Allegedly, Victorian Greyjoy also won’t be appearing this season, and that is one character the world can certainly do without. At this point in time, Asha/Yara and Theon are the only Greyjoys I care about, and I don’t even want to see them either. I have no desire to watch Ramsay continue abusing Theon, and Yara’s role last season led nowhere. It was incredibly pointless and amounted to nothing.

I’d say my biggest concern for this season has to do with Cersei. Game of Thrones has a really shitty record when it comes to its female characters, and that is especially true with  Cersei. I don’t think any of us will be forgetting the unnecessary rape scene from last season, and this season is going to see her shoved down even further. In the books, Cersei, as punishment for her crimes of adultery, is forced to walk from the Sept of Balor to the Red Keep through the streets of King’s Landing naked and shorn. That passage in the book perfectly highlights the inherent misogyny in the world of Westeros. Told from Cersei’s point of view, it was one of the most uncomfortable things I have ever read—her adultery is clearly an excuse to punish her for being a woman—but it was also really well written, and told in such a way as to not glorify her punishment.

I have no hopes that Game of Thrones will be able to do that passage justice. Time and time again, Game of Thrones has gone out of its way to showcase violence against women for the sake of shock value—Talisa Stark’s and Ros’s deaths come to mind—while also treating women like sexy props. I’m still looking forward to this season, but this is the one thing that I dread to see come to the screen. Hopefully the show will do a good job with the source material here, but I really doubt it.