I’m not necessarily the best at taking my own advice. So when I said more than a year ago that everyone should be watching Steven Universe, I had intended to follow suit. With the exception of an episode here and there, I unfortunately didn’t get around to watching. In a way, I’m glad for it—I’d much rather marathon a show than wait for weekly updates. With the announcement of Cartoon Network renewing the show for another two seasons, though, dreams of watching it all at once (in the near future) were all but dashed, and I finally sat down to watch the entire series alongside my brother. 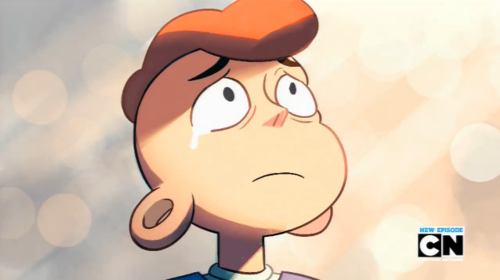 Me after catching up.

We’ve discussed a couple of Steven Universe‘s elements before, all in glowing terms. Today will be no different. As much as I want to gush over Pearl’s unmistakable queerness when it comes to her relationship with Rose Quartz, another underlying theme has caught me off guard with the subtlety and the delicacy with which it was written. Steven Universe is, of course, not the first show to tackle the subject of grief. Yet the way it’s approached in this show is so nuanced that I’m left feeling it in the pit of my stomach long after the episodes have ended.

Spoilers for “Rose’s Scabbard” under the cut.

As a show that maintains its continuity rather than going the episodic route, Steven Universe has the opportunity to weave in smaller details that can be overshadowed by the more bombastic things happening around them—like the beginnings of an intergalactic war. However, with the premiere of one of the newest episodes, “Rose’s Scabbard”, the viewers finally get to experience the depth and differences in each of the Crystal Gems’ methods with handling their lingering grief over the loss of Rose Quartz.

Within the episode, Pearl reveals her pride in harboring some of Rose’s past secrets that she didn’t share with any of the other gems. However, she becomes distraught when Steven reveals that he already knew some of these secrets, thanks to Lion’s guidance. Upon being told that perhaps Pearl wasn’t the only gem Rose kept secrets with, Pearl runs away to the old gem battlefield, ordering Steven to leave her alone when he arrives to comfort her. Once Steven reaches her, it’s clear that Pearl is ashamed of the strength of her grief, but is also obvious that she can’t let it go. Not yet. However, Steven is able to pull her out of her funk by allowing Pearl to relive some of her older memories. 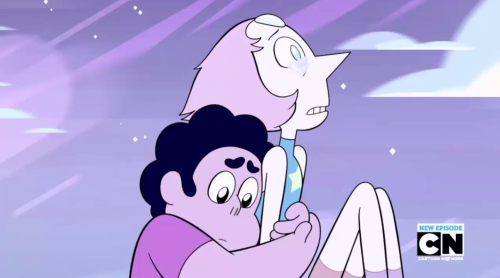 From earlier episodes, Pearl has been revealed to be a gem that experiences strong, overwhelming emotions that lead her to beat herself up over her weaknesses. For instance, in the battle against the fusion Sugilite, Pearl throws her everything into stopping Sugilite, but is the first to claim defeat because she isn’t strong enough. “Rose’s Scabbard” is no different, nor is Pearl’s method of dealing with her sadness. Under the intensity of her emotions, Pearl lashes out against Steven, then runs away to recuperate. Even when Steven almost falls to his death, she can’t bring herself to save him because her emotions are so crippling that she remains where she is. Furthermore, she is only brought out of her episode by Steven not allowing her to think of herself as worthless. When Pearl asks, “I wonder what Rose would think of me now,” it’s another way of her telling herself that she, again, was too weak. In this instance, her sorrow is two-fold as she’s not only feeling inadequate and abandoned to the memory of someone she loved so very dearly (and I think it’s safe to say in Pearl’s case, that love was very possibly romantic), too weak to live up to the faith Rose put in her as a protector, but in this moment Pearl also feels the brunt of living around Steven all the time, a little boy that does nothing but remind her of what she has lost.

I find it interesting that Amethyst, the gem most associated with lashing out, is almost in direct contrast to this. Despite disliking parts of herself, when Amethyst is struggling with her emotions her first instinct is to go to others, though perhaps in strange ways. More than that, she seems to reassure others that they’re not alone in their feelings. For instance, in “Tiger Millionaire”, Amethyst deals with her anger by competing with others in an underground wrestling tournament. Sure, she’s there to get her aggression out physically, but she’s also surrounded by other people who may be feeling the same displacement as she does, and in turn is there to show that there’s one more person that feels like they do. Additionally in “Maximum Capacity”, when Greg (Steven’s dad) begins to get upset over a picture frame housing a photo of him and Rose, Amethyst is the one that offers the outlet of marathoning a show to forget about the pain—something the two had done in the past. In “Rose’s Scabbard” it only manifests for a moment, but Amethyst clearly hates it when Pearl gets into these moods, and I think it’s because Pearl completely shuts her out. Amethyst tries to get to Pearl by saying she’s not alone in her mourning, but Pearl doesn’t want to hear it. Although Amethyst hardly every approaches these things with any sort of tact or sense of moderation, and not without a bit of selfishness on her part, Amethyst copes by being around other people, even if she ends up hurting them more. 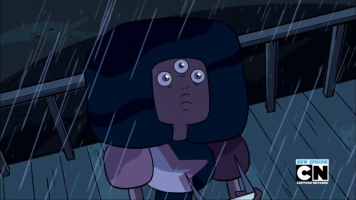 Garnet, though, has a different approach. Her suffering is silent, stoic. In fact, it seems as though she completely ignores it most of the time. I don’t think that’s the case. I do believe she internalizes it, though. Garnet keeps her grief to herself, not wanting to burden anyone else with its presence. This fits in with her stance on her future sight; she only told Steven about it because there was a possibility that him knowing would release him from the burden of wondering. She is the rock that the other gems rely on, and when Garnet shows a strong emotion, the other gems know that shit’s getting serious. However, we still see her grief show itself when her words become more tense, her sentences become shorter than usual, or when she tells the others to be quiet. More than her words, though, Garnet attempts to let out her grief in short bursts of physical aggression. She’ll punch something, but immediately reign it back in, getting control once again. Though when she fuses with Amethyst to create Sugilite that control doesn’t carry over. Even when Garnet combines with the other two gems to make Alexandrite, an aspect of Garnet’s control is still there, so perhaps Sugilite is an example of how Garnet might express her grief were her emotions to get away from her.

While all of these are important and valid ways of dealing with grief, I think Steven’s method is one that often gets ignored. Steven grew up knowing nothing about his mother, and is just now starting to learn more about her. He can’t connect to the gems’ grief over his mother’s death because he never knew her. He can’t even bring himself to cry about her. Sure, Steven can be sad or angry, but I would argue that he hasn’t ever truly grieved over anything. His emotions over this issue in particular stem more from frustration over being told how he should feel and not having this connection that everyone wants him to have. And while this isn’t necessarily to do with grief, he’s still coping with something important and his feelings shouldn’t be swept to the side. Because the absence of drama is difficult to sell, this reaction is often overlooked, and I think that’s an injustice. Sometimes a person just isn’t sad about someone dying—not in a malicious or uncaring way—and that’s okay.

Everyone has a different way of dealing with death and tragedy in their lives, and a different way of dealing with those around them who are suffering in turn. I’m thrilled that we got such a close-up look of Pearl’s way of dealing with this, and through that another tiny view of how the other gems deal with it. However, I’m also glad that “Rose’s Scabbard” didn’t become one of those after school specials. Subtlety is an art, and a technique that can be used to really drive a point home without beating the audience over the head with it. In this case, I’m glad that Steven Universe is showing all these different emotions, and even more glad that the overall message seems to be “it’s okay to feel like this. Your feelings are valid. You are not alone.” With thousands of kids who could have gone through something similar watching, this may be just the message they need to make it through another day. 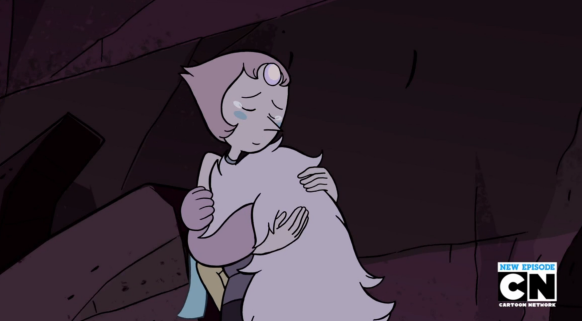 3 thoughts on “Steven Universe and Grief”