In the highly unlikely event that anyone has forgotten the incredibly compromised position our hero found emself in at the end of Agent of Asgard #11, allow me to recap in brief:

Up to speed? Good. With things looking unusually grim even by Loki’s standards, Evil Future Loki takes the opportunity to regale his captive audience with the story of why he—in all his evil, bitter old man-ness—is Current Loki’s only possible fate. Of course Evil Future Loki is a vicious madman, but under the circumstances, it’s becoming hard to disbelieve him.

For the sake of clarity, I find it prudent to point out that while Current Loki is genderqueer and is referred to using the neutral pronouns ey/em on this blog, Future Loki seems to reject, and even mock, this facet of his past self’s identity, so Future Loki is referred to as he/him.

*sounds of Stannis Baratheon raging in the distance*

The story begins with Future Loki showing Current Loki an image of the end. Midgard is a dead, gruesome wasteland and Future Loki sits upon the Iron Throne an ostentatious armchair made of presumably human remains, gleefully reanimating the fleshless corpses of the Avengers to attack a grief-stricken Thor. He goes on to explain that things all started exactly as Current Loki planned, running errands for the All-Mother and having past crimes erased. In fact, this whole phase of the plan goes marvelously, filled with heroic deeds and lofty ambitions. Only after every last one of Loki’s crimes is erased do things start to go wrong, because in spite of eir newly-sterling record, Loki is still assumed to be malevolent by nature. Even stripped of his past crimes, Loki remains the scapegoat and the outcast, based solely on the expectation that someone history and myth calls the “god of lies” will ultimately live up to the name.

Lay off the amphetamines maybe.

According to Future Loki, this begins the slow, bitter process by which Loki is crushed under the weight of frustration and betrayal to turn against Asgard once again, assuming his old identity and grudges. After all, if everyone hates you, why not give them a reason? Seeking to protect Asgard, the All-Mother gives Loki reign over Midgard to take out his anger, and Loki takes the bargain, knowing that it is perhaps the best way to hurt Thor, who he claims has turned on him just like everyone else.

Though Future Loki says that his future is inevitable and self-fulfilling, he undermines his own claims somewhat by bringing up the fact that he has been mucking about with the past to speed things along. His ability to bounce freely through space and time allowed him to set in motion some of Current Loki’s actions. This suggests that the future is changeable, but his interference serves to dishearten Current Loki enough that ey loses the will to change it. Future Loki believes that he has cut Verity out of Current Loki’s life entirely, but I think that whether or not she chooses to forgive Loki will play some kind of role in determining whether or not Current Loki plays into Future Loki’s plan. The turning point in eir life, after all, relies heavily on em remaining alone and friendless forever. 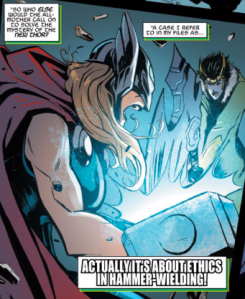 Ewing and Garbett snuck some additional goodies in underneath the dark theme of this issue. One of the successful missions touched on by Future Loki seems to involve Current Loki fighting female Thor, and is jokingly entitled “Actually It’s About Ethics In Hammer-Wielding,” a reference to the vapid, exhausting sexism of Gamergate and probably a nod to Thor’s defense of feminism in her recent solo comic. There is also a panel of Loki and Fandral lying partly undressed in a field somewhere while Fandral comments “thy tongue is of the purest silver tonight, Loki.” It is proving difficult for both myself and a sizable portion of Tumblr to see this as anything other than post-coital banter. Maybe Loki/Fandral was just canonized, maybe it was an accident of poor planning, or maybe it was baiting, there is no word from the creators yet. I have been unsubtly demanding textually bisexual Loki since Garbett discussed Loki’s sexuality more than a year ago. I can’t say that Loki/Fandral was a ship that I had considered, but it certainly wouldn’t be out of character for either of them. Loki has already had a female lover in the series, so it only seems fair.

Are those stockings and shorts or thigh-high boots? Either way, damn.

Thus, #12 has ended much the same way as #11: Loki is still shirtless, tied up, and friendless, but now ey’s also depressed and Future Loki has lit em on fire. Can we hope for things to go better in #13? Don’t hold your breath.